Happy Friday 13th everyone! Here are a few guidelines for surviving the day:

–Don’t split into groups to search an area faster.

-But Do hit up the Friday 13th: The Ultimate Collection (Parts I – VIII + Jason Mask) – UK link here – stay inside and ride out this fateful day. Unless you’re reading this in an isolated cabin near a creepy lake, in which case, you’re as good as gone. And who’s your network provider? Because that’s amazing you even have reception out there.

Below is the quite ridiculous Friday 13th: The Ultimate Collection (Parts I – VIII + Jason Mask), a 50,000 limited edition print of 8 discs and 736 minutes of horror viewing. Some as in ‘scary’ horror viewing. Others as in ‘jeez, that’s terrible’ horror viewing. 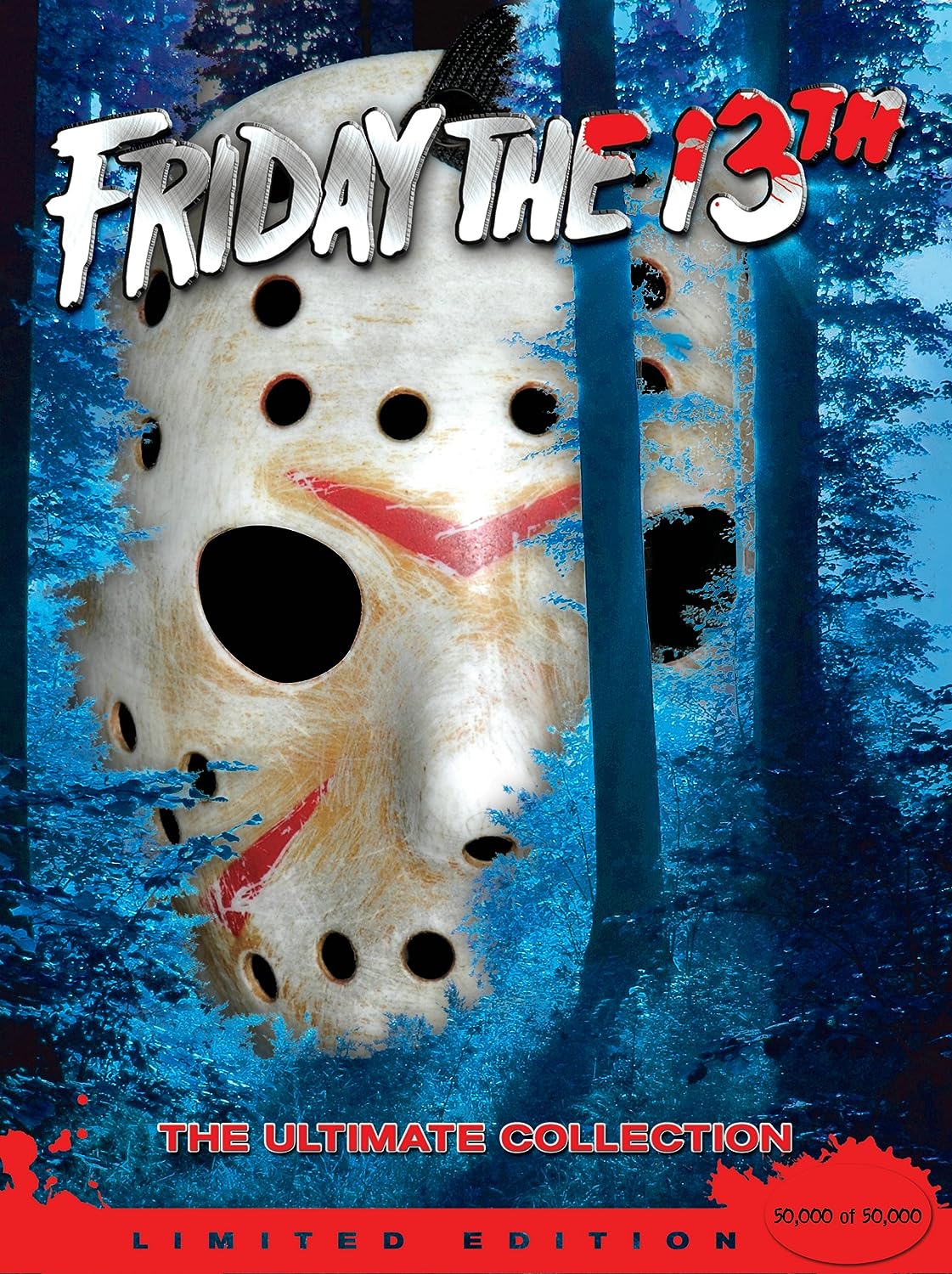 Friday the 13th
The film takes place years after a young boy named Jason drowns in a lake while attending Camp Crystal Lake and shortly thereafter, the camp closes. Flash forward to the present, where the owner decides to re-open the camp and one by one, the counselors have mysteriously been murdered by an unseen person.

Friday the 13th, Part 2
The second installment picks up with Jason Voorhees, presumed dead from drowning years ago, exacting revenge on the innocent campers at “Camp Blood.” Living as a hermit in the woods all these years, Jason witnesses the graphic murder of his mother and decides to wreak havoc on everyone at the camp – killing each camp counselor one by one.

Friday the 13th, Part 3
Vacationing teenagers take off for a weekend of relaxation at Camp Crystal Lake. Planning a few days of sex, drugs and rock-and-roll, they are in for a series of frightening surprises when a local motorcycle gang follows the teenagers back to their campsite, only to find a persistent Jason with an agenda of his own. Adorned with his trademark hockey mask for the first time in the series, Jason delivers non-stop chills and thrills as everyone on the lake must fight for their lives. Part III includes cast commentary by author Peter Bracke and actors Larry Zerner, Paul Kratka, Dana Kimmell and Richard Brooker.

Friday the 13th, Part IV: The Final Chapter
Jason resurfaces from a seemingly deadly massacre and returns to Camp Crystal Lake to a new set of prey. Starring a young Corey Feldman as Tommy Jarvis, it seems Jason has finally met his match in the 12-year old horror movie maven. Enlisting the help of a local hunter, Tommy and his sister must rely on one another to help defeat Jason, while also trying to avoid their own demise.

Friday the 13th, Part V: A New Beginning
With Jason dead, someone new has begun a killing spree of their own, using Jason’s M.O. and preying on inhabitants of a sanctuary.

Friday the 13th, Part VI: Jason Lives
Tommy returns to the grave to ensure that Jason is indeed dead. Instead of remaining dead, Jason is accidentally brought back to life by Tommy and now Tommy must stop all the mindless killing and make sure Jason dies for good this time. Part VI features commentary by director Tom McLoughlin.

Friday the 13th, Part VII: The New Blood
The film centers on Tina Shepard, a young girl with telekinetic powers who believes she drowned her father in Crystal Lake. Returning to the site as a method of supposedly helping her cope with her grief, Tina accidentally frees Jason from his watery grave, only to lead to more killing sprees by the man in the infamous hockey mask. Part VII features commentary by Kane Hodder and director John Carl Buechler and Part VIII features commentary by director Tom McLoughlin.

Friday the 13th, Part VIII: Jason Takes Manhattan
A graduating class of a local high school vacation on a cruise ship and unbeknownst to them, Jason is a stowaway on the same ship. Slowly killing students one at a time, Jason eventually sinks the boat, stranding the few lone survivors in Manhattan. Among those survivors, is Rennie, who believes Jason attempted to drown her as a child. Fighting for her their lives, Rennie and the other survivors must make sure Jason dies once and for all.

A featurette “Tales From the Cutting Room,” in which exclusive deleted scenes and footage is revealed for the first time. An 8-part featurette “The Friday The 13th Chronicles,” which looks at the legacy of the films throughout their history, featuring cast and crew commenting on each film and why they appeal to audiences. Includes Adrienne King, Amy Steel, Corey Feldman, Kane Hodder, Lar Park Lincoln, Betsy Palmer, Tom Savini and directors Sean Cunningham, Tom McLoughlin, Rob Heddon, Joseph Zito and John Carl Buechler. A 3-part featurette “Secrets Galore Behind The Gore,” which looks at the work of master make-up effects designer Tom Savini in Part 1 and Part IV and John Carl Buechler in Part VII. Includes rare and never-before-seen footage, drawings and stills illustrating the make-up techniques used to create Jason and achieve elaborate death scenes. A featurette “Crystal Lake Victims Tell All!” in which cast and crew from various films share amusing anecdotes. Includes Corey Feldman, Larry Zerner, Adrienne King, Amy Steel, Lar Park Lincoln and directors. A featurette “Friday Artifacts and Collectibles,” which looks at props and collectables from the films. The theatrical trailers from all 8 movies except Part VI, which is represented by the teaser trailer.