YOU’LL RUIN THE MAGIC FOR YOURSELF.

BECAUSE DOCTOR STANGE IS A MOVIE ABOUT MA-

FORGET IT. HERE COMES THE SPOILERS.

After the fancy animated credits finish, the screen cuts to black.

“I don’t drink tea,” Thor (Chris Hemsworth) is heard saying over the black screen. The image kicks back in, tight on Doctor Strange (Benedict Cumberbatch) sat down in his New York sanctum. “You don’t drink tea?” the sorcerer asks in reply.

Thor is shown sitting with a tea cup in hand opposite Strange. His hand drifts out of shot, and then reenters with a large tankard of beer. Magic is great. The God of Thunder takes a sip in approval.

Strange continues to speak about how he’s keeping track of beings from other dimensions entering our reality, especially the dangerous ones. So why did Thor bring Loki to New York?

Thor’s beer is already nearly empty. He answers that they’re on Earth looking for their father.

If Thor and Loki find Odin, Strange asks, would they all then return to Asgard?

Strange stands up, promising to help Thor and Loki locate their father. And the screen cuts to black.

So we can probably add Doctor Strange’s name to Thor: Ragnarok, supporting the official photo of Thor holding a card with Stephen’s New York address on released a few months back. 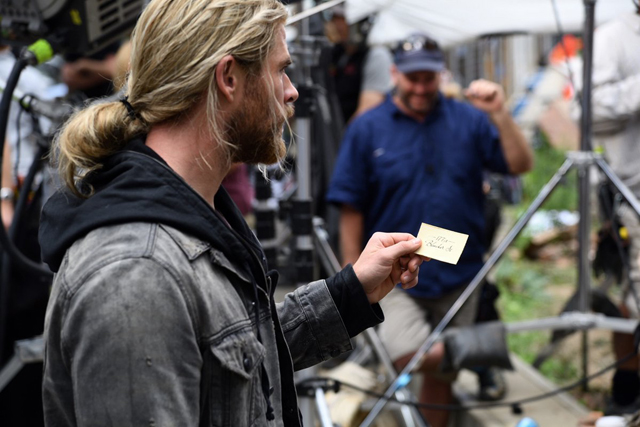 Marvel’s Doctor Strange follows the story of the talented neurosurgeon Doctor Stephen Strange who, after a tragic car accident, must put ego aside and learn the secrets of a hidden world of mysticism and alternate dimensions. Based in New York City’s Greenwich Village, Doctor Strange must act as an intermediary between the real world and what lies beyond, utilizing a vast array of metaphysical abilities and artifacts to protect the Marvel cinematic universe.

Doctor Strange is set for release on October 25th in the UK and November 4th in the US, with Scott Derrickson (Sinister) directing a cast that includes Benedict Cumberbatch (Sherlock) as Stephen Strange, Tilda Swinton (Snowpiercer) as The Ancient One, Chiwetel Ejiofor (12 Years a Slave) as Baron Mordo, Benedict Wong (The Martian) as Wong, Rachel McAdams (True Detective) as Christine Palmer, Mads Mikkelsen (Hannibal) as Kaecilius and Benjamin Bratt (The Infiltrator) in an as-yet-unrevealed role.