Hello Games have announced the release of The Atlas Rises Update 1.3 for their sci-fi title No Man’s Sky.  This brand new update brings a new and overhauled storyline, portals, a new procedural mission system, trade improvements, multiplayer and much more.  To get a glimpse of some of these new features check out the new trailer below… 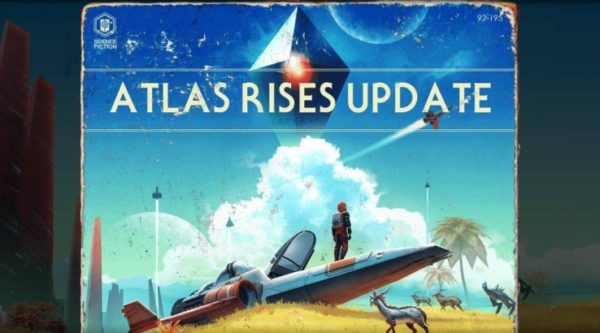 The Atlas Rises update brings a whole new storyline to the game centered around the appearance of a mysterious new inter-dimensional race and the unravelling of the fabric of existence.  This new storyline includes a new context, quest system and branching narrative that brings 30 hours of new gaming experience effectively doubling the lore of the existing game.

There is so much more to discover in No Man’s Sky with this update including new worlds to explore, new biomes, crashed freighters to investigate, portals that act as doorways through space time to other planets (think Stargate), new farming related items and a new freighter S-class vessel.

Multiplayer arrives with this update allowing up to 16 players to see, communicate and explore the game’s universe together.  This is visualised using glowing floating orbs and although many will perhaps see this interaction as limited it is, in my opinion, a very important and wisely cautious first step towards a true co-op experience.

The patch notes have been included below due to the shear amount of new and improved content included in this update.