Activision have released a new trailer showcasing the new Headquarters social space in Call of Duty: WWII.  This is the very first of its kind for any Call of Duty game and promises lots of activities to keep fans sticking around for more than just the competitive side of things.  Watch the trailer below. 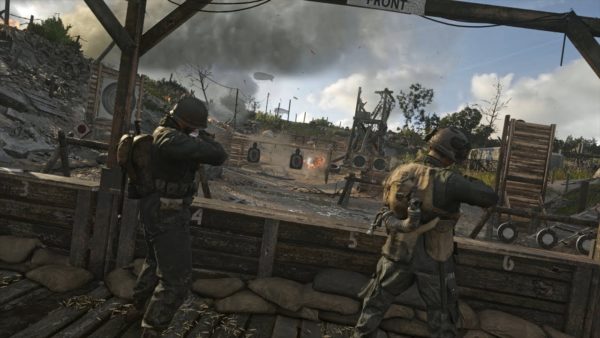 Headquarters includes a fancy Firing Range where players can test their accuracy skills shooting at stationary targets (not that players will have much opportunity for that).  There are also AA guns to use and earn rewards from and a PvP course where others can watch from above to see how the match goes.  This actually looks pretty great to see in the trailer as players line up to watch a test of skill between two players.

Hopefully this new social space will encourage players to join together, make groups and find friends for battles rather than the current trend of getting screamed at by those who don’t understand the concept of being a good loser.

Headquarters will be available to experience when the game is released on the 3rd November. And don’t forget that Private Beta begins for those who have pre-ordered Call of Duty: WW2 on the Playstation 4 on the 25th August.

Warm up in the Firing Range, prove you’re the best in the 1v1 Pit, watch Call of Duty esports matches live in the Theater, man the AA guns to earn rewards, and much more in Call of Duty’s first-ever dedicated social space. Introducing Headquarters, coming to Call of Duty®: WWII Multiplayer on November 3.