Wired Productions and developer LKA. have announced that 25% of the profits of all digital sales of their first person, psychological adventure, The Town of Light, that are sold between the 16th August and 6th September will be placed into a fund to help support mental health charities including Take This, Inc. 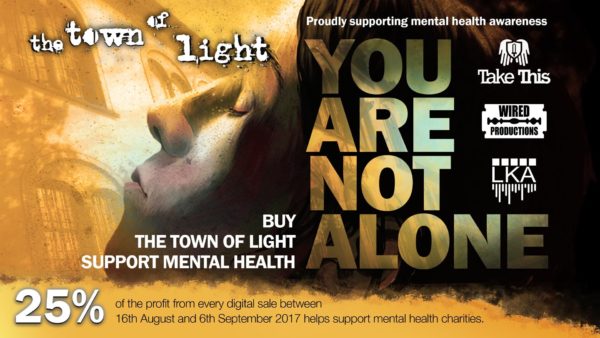 This generous contribution marks the beginning of a year long campaign to help raise awareness of the importance of mental health.  Very often, because mental health conditions are not as visible as needing crutches or a wheelchair, they are often overlooked and/ or not fully understood by the general population so the proceeds made from this kind offer will mental health charities, particularly the vital services offered by Take This, Inc, which include providing mental health education, referral resources and the popular ‘AFK Rooms’ – staffed mental wellness spaces at some of the world’s most prominent video games events.

“The motivation behind The Town of Light has always been one of compassion”, said Luca Dalcò, Studio Head, LKA, “The struggles surrounding mental health affect so many of our lives day to day; to shine a light on mental illness and tell the story of those who suffered without a voice in the past was our goal. To have the opportunity to help those in the present is more than we could have hoped for.”

“The Town of Light, because of the themes of mental health within the game and its grounding in reality, starts the conversation,” said Leo Zullo, Managing Director, Wired Productions, “Our duty is to stand together and continue that conversation, not only to ensure that we dispel the stigma around mental health, but also to ensure that those who feel alone know that they are not, and are given the help they often desperately need. This promotion, alongside our extended campaign for awareness, forms only a small part of a much greater picture, but we hope they will touch many lives.”

Russ Pitts, President, TakeThis, Inc. said, “The biggest challenge people dealing with mental health issues face is isolation and loneliness. The feeling no one will understand or can help. And a lot of people turn to video games for an escape. Seeing mental health issues addressed in true and meaningful ways in a game like The Town of Light can be a lifeline for people in need.”

The Town of Light is a psychological story-driven adventure based on real life events at the Volterra Psychiatric Asylum in Tuscany.  Players will follow the adventure through the eyes of a 16 year old girl called Renee who has symptoms of a mental illness where the lines between fantasy and reality become blurred.  As Renee, players must find the answers to many questions about the place where she spent most of her childhood, the asylum.

If you were thinking of purchasing The Town of Light then now is the perfect opportunity to do so, not only will you get an excellent and thought provoking game but will also get the comfort of knowing you have helped support a very worthwhile cause.