Turn 10 Studios have teamed up with motorsport-lifestyle brand Hoonigan to bring the Hoonigan Car Pack to Forza Horizon 3 on the 15th August.  This new car pack features seven new ‘Hoonigan’ cars and will be available on the Xbox One and Windows 10 PCs on the 15th August.  Those who have pre-ordered Forza Motorsport 7 will also get access to this pack later in the year.  Watch the new trailer below to see the cars in action… 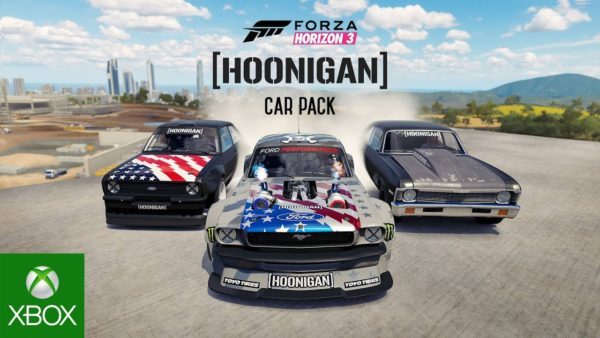 The cars included in the Forza Horizon 3 Hoonigan Car Pack are:

“I’m really excited about the fact that we’re releasing a Hoonigan car pack with Forza,” said Ken Block, rally driver and co-owner of Hoonigan. “The fact that fans are going to be able to drive not just my twin-turbo, 1400 hp Hoonicorn RTR V2 that I’m running in Climbkhana, but also my Gymkhana Escort, is awesome. Plus being able to drive BJ’s Loki, [Brian] Scotto’s 911 and all of the other cars? None of us actually let anyone else drive our cars really, so this is definitely the best chance anyone’s going to have to get behind the wheels.”

This car pack will also provide 10 new achievements worth a total of 500 Gamerscore points.

The Hoonigan Car Pack will be available for Forza Horizon 3 on the 15th August.