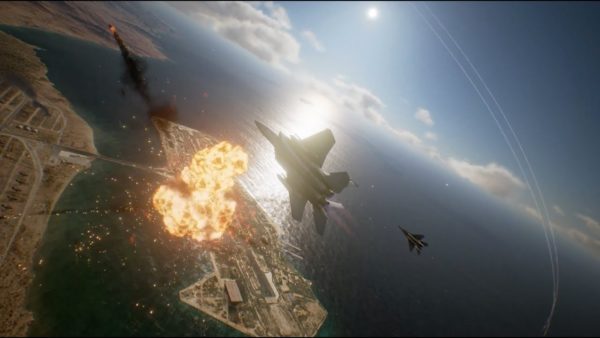 In Ace Combat 7: Skies Unknown tensions are growing between the Kingdom of Erusea and the Osean Federation due to the latter country disrespecting the formers sovereignty with a giant space elevator.  Thanks to Princess Rosa Cossette D’Elise of the Kingdom of Erusea encouraging her people to fight a war is certainly on the cards.

Ace Combat 7: Skies Unknown will allow players to take to the cloud filled skies in authentic and advanced aircraft and take part in intense aerial combat over beautifully designed cityscapes.

Those attending Gamescom will be able to try the game for themselves in Hall 6 Booth A41-B41 until the 26th August.

ACE COMBAT 7: SKIES UNKNOWN continues this rich tradition of delivering an engrossing storyline by delving back to the Strangereal universe from which players have experienced most of the drama and emotion the series is known to deliver. Combined with gameplay and graphics that truly bring aerial combat to life through the power of today’s gaming consoles and PCs, ACE COMBAT 7: SKIES UNKNOWN will be an experience no gamer nor longtime ACE COMBAT fan should miss.

Ace Combat 7: Skies Unknown is cleared for landing on the Xbox One, Playstation 4, PSVR and PC in 2018.