Boston based games developer Disruptor Beam have announced that their hit mobile/web/PC title Star Trek Timelines will be expanding later this year with a huge amount of new content from the upcoming Star Trek: Discovery series which is due to premiere in the US on the 24th September. 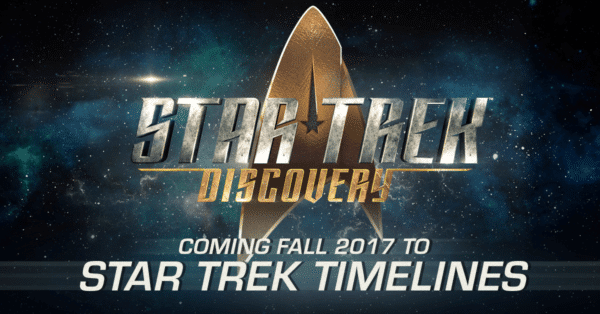 Star Trek: Discovery will be the first Star Trek series to hit our screens in over 15 years and the Disruptor Beam team are certainly excited in getting the new content ready for fans.  Players can expect to find Discovery’s new crew members including Lt. Commander Michael Burnham and Lt. Saru, plenty of new ships and more.  If all this new content isn’t enough there will also be a month long Discovery Mega-Event to keep you occupied.

“We are all Star Trek fans here at Disruptor Beam – we’ve grown up with and have found inspiration in the first five TV series, and we look forward to seeing how Discovery will expand the Star Trek universe in the coming months,” said Erin Prince, Star Trek Timelines Product Owner at Disruptor Beam. “It was with great enthusiasm that we approached CBS Consumer Products about integrating future Discovery content into Timelines. We can’t wait to give our existing players even more Star Trek content to experience, but we also look forward to opening up Timelines to a whole new generation of Star Trek fans.”

Star Trek: Discovery will be coming to Timelines this September.