Developer Vector Unit have announced that they will be releasing their popular kart racer, Beach Buggy Racer, on the Nintendo Switch this coming Thursday (14th September).  This off road racer has been remastered for the Nintendo Switch to provide smooth 60fps and supports both single player and local split screen multiplayer.  Want to see the game in action then watch the trailer below… 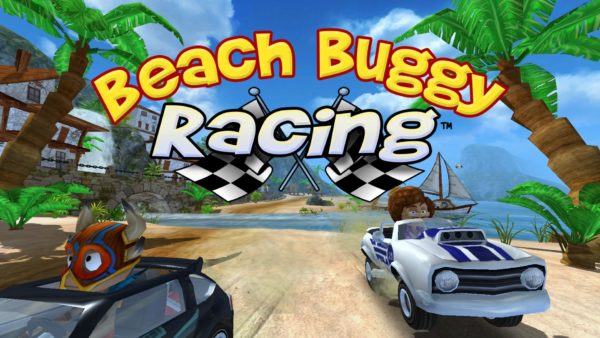 Beach Buggy Racer allows up to 4 friends to race across 15 tracks including dinosaur-infested jungles, alien planets and beautiful beaches.  As with other games in the genre, players will be able to choose from a selection of drivers each of which have their own abilities and skills such as teleportation, flaming fire tracks and confusion spells.  Fancy customising your kart into into a monster truck or lunar rover?  With Beach Buggy Racer it is possible to use your winnings to upgrade and paint your kart however you wish and even collect a garage full of unique cars.

As players race around the tracks there will be over 25 unique Power-ups to use to give you the edge in the race, these power ups include oil slicks, spring traps and even crazy sounding Death Bats.

Look out for Beach Buggy Racer racing on to the Nintendo Switch on the 14th September.