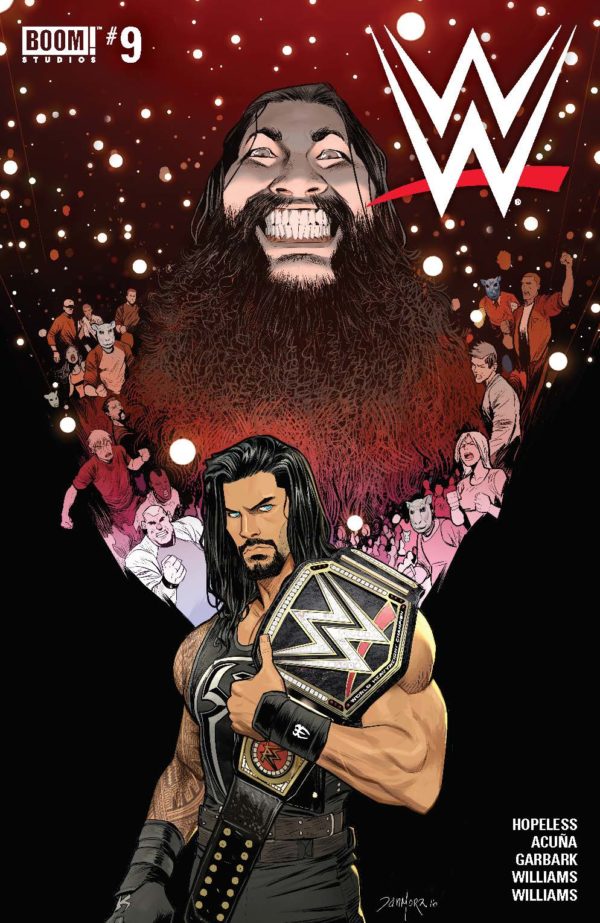 The WWE comic book series focusing on the stories of all three members of The Shield has been a pretty fun ride so far. The opening arc focused on Seth Rollins’ rise to the top of the card following the group’s initial break-up, painting him as a troubled character who beneath everything else, was desperately insecure and power-hungry. The second arc details Dean Ambrose’s quest to take Rollins down and finished up in WWE #8 with his victory at the Money in the Bank PPV in 2016. Ambrose truly lived up to his lunatic fringe character in his issues, taking part in all sorts of wacky adventures that included several other WWE superstars.

Now it is the turn of the Big Dog himself, Roman Reigns. WWE #9 picks up on the same night as WWE #8 with Roman, the then WWE champion, preparing for his main event match with his former brother Seth Rollins. Reigns’ story decides to do something that the WWE rarely do and dig deeper into Reigns’ character. We see him question why the fans boo him and cheer Rollins. This forces him to get distracted during the match, throwing him off his game and leading to his surprisingly clean loss to Rollins.

Rollins’ victory was short-lived however, with Ambrose cashing in straight after and taking the belt from his nemesis. The issue also covers Reigns’ reaction to that event and we finish the issue with him being somewhat of a broken man, a superstar who feels like, despite his best efforts, he has been betrayed by everyone around him.

The story also digs into his past, with flashbacks (which are unintentionally rather comical) of him playing with Jimmy and Jey Uso at Rikishi’s house. These flashbacks show Reigns struggling, even at a young age, to understand why wrestling fans were so complicated. The ridiculousness aside (Rikishi just wandering his house dressed as Rikishi) these add an effective element to Reigns’ character, as do flashbacks of him playing football in college and not being able to deal with people attacking his family and heritage.

The artwork, from Serg Acuna, once again, is fairly consistent. He brings the wrestling world to life in a way that few artists have managed to do in the past and his work on all 3 members of The Shield remains pretty good.  Dennis Hopeless also deserves props for his continuous character work, he has managed, successfully, to make add something to three of the biggest and most popular characters in the WWE today.

One thing you should be aware of before buying this issue, though, is that The Wyatt family, who are included very prominently on the cover of the issue, actually have nothing to do with the story here.

Verdict: After the zany adventures of Dean Ambrose, WWE comics return to the ground here with an in-depth look at one of WWE’s most divisive characters. Great artwork and great storytelling make this another great edition for the collection.

If you’re looking to save some money to fund your WWE comic book collection, be sure to use the latest coupons offers at CouponsMonk for a host of savings across various retailers.