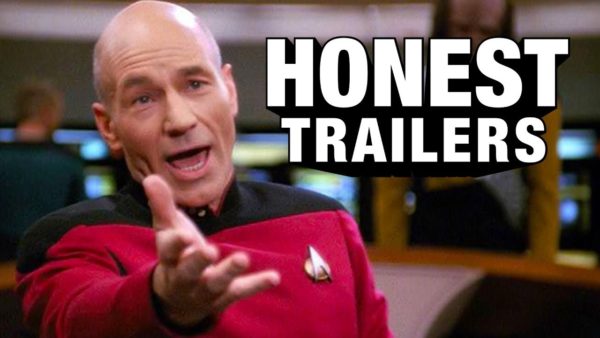 Star Trek made its triumphant return to the small screen this past weekend with the premiere of Star Trek: Discovery [read our reviews of the first episode and second episode], and to celebrate, Screen Junkies has unveiled its Honest Trailer for Star Trek: The Next Generation!

Your dad loved the original Star Trek’s mix of campy aliens, cheesy dialogue, and razzy caliber acting. Now, get ready for the original series’ geeky younger brother featuring new aliens, more complex stories, and acting that’s way better than Star Trek deserves in this kinder, gentler sequel where crew members discuss their feelings, celebrate each others cultures, and fight with their words — not their fists.

Warp into the 21st century with an all new USS Enterprise — an awkward hybrid of a cutting edge spaceship and a Marriott convention center — and journey to a Sci-Fi utopia where poverty, racism, and war are a thing of the past. And forget about the original Star Trek’s mini-skirt boy’s club, because on this Enterprise of the future is WOKE (most of the time).