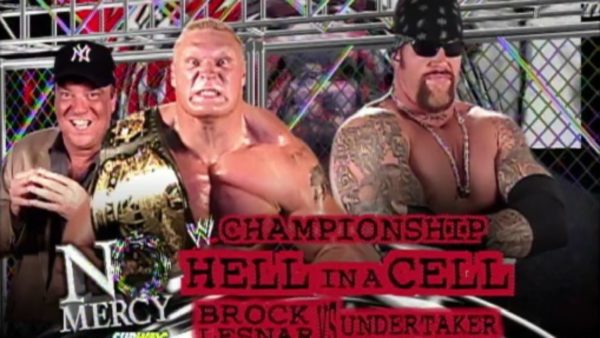 Brock Lesnar and The Undertaker have been involved in some classic bouts over the years, but their most memorable encounter, WrestleMania 30 aside, came at No Mercy back in 2002, inside the unforgiving Hell in a Cell structure. Brock was still a young superstar at the time and was riding a wave of momentum that had seen him go unbeaten since his debut earlier in the year and defeat The Rock at SummerSlam to become the youngest ever WWE champion.

The pair had met a month before at Unforgiven, a match which had ended in an Undertaker victory via DQ and heading into the match, it looked as though Lesnar was about to drop his belt to the American Badass inside the cell. The two men absolutely destroyed each other, in what is one of the best Hell in a Cell bouts of all time. Lesnar walked away as the victor in a match that only added to his superstar aura. 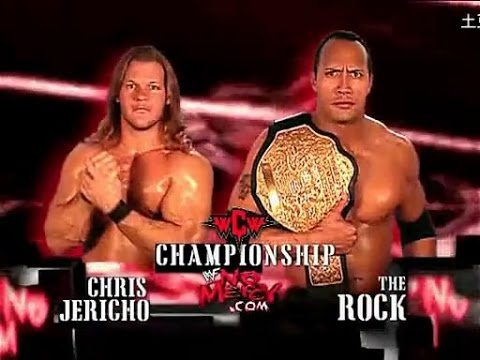 The WCW invasion storyline of 2001 is generally considered a failure in the eyes of most WWE fans, but there was one wrestler who benefitted from it, and that Chris Jericho.

His questionable loyalties towards the WWF at the time made for some great viewing and really helped establish him as one of the company’s top stars.

Up until this point, Jericho had never held a world championship and his match with The Rock, for the WCW World Championship at No Mercy 2001, was one of his crowning moments. The two give us the night’s best match, which was no easy feat on a show that had Stone Cold Vs Kurt Angle Vs RVD as the main event, and it helped further establish Jericho as one of the bigger stars in the company at the time.

The most recent match on this list – the Intercontinental title match at last year’s No Mercy – was an amazing bout, one that surprised audiences and reminded us all what awesome talents The Miz and Dolph Ziggler were.

The two had been involved in countless matches with each other over the years, but this one had an added twist: If Dolph Ziggler lost, he was going to retire.

It added an incredible amount of drama to the bout and the final moments, which saw Dolph finally win back the Intercontinental title were a joyous watch for fans. Unfortunately, the company were unable to capitalise on Dolph’s momentum and he has since dwindled back down the card into irrelevancy. 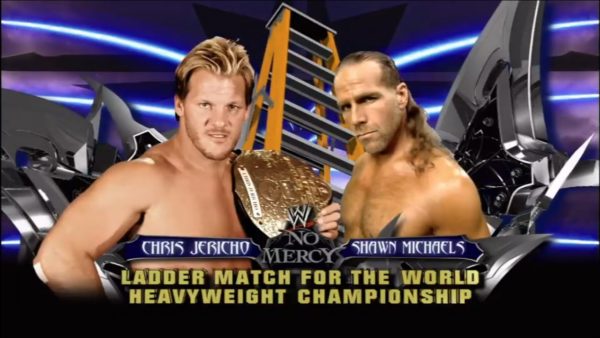 Chris Jericho and Shawn Michaels are two of the finest wrestlers to ever lace up a pair of boots and their rivalry back in 2008 is one of the finest moments in both men’s career.

Both men give some of their finest work in the build-up to this match, with Jericho famously punching Shawn’s wife at SummerSlam and the two had an excellent encounter at the Unforgiven PPV one month prior to this event. This was the blow-off match, though, with Jericho putting his World Heavyweight Title on the line against Shawn Michaels in the match HBK had made famous – the ladder match.

The two men give us one of the greatest ladder matches of all time, bringing a shockingly violent end to what was easily the best feud of 2008. Jericho walked away from this with his belt still in-tact but this was definitely one for each superstar’s highlight reel.

1: Kurt Angle and Chris Benoit Vs Rey Mysterio and Edge – No Mercy 2002 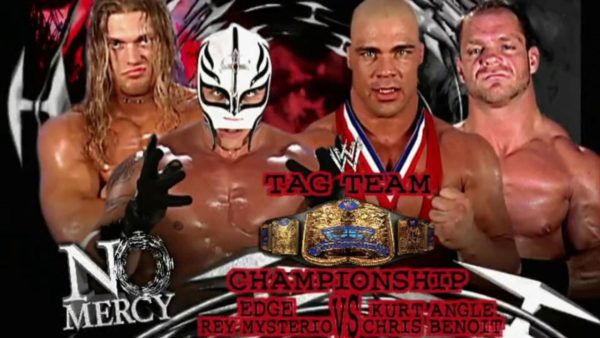 Four of the iconic SmackDown six did battle in what is the best match in the history of the No Mercy PPV. The finals of a tournament to crown the first ever SmackDown tag team champions, the four men set about giving us one of the finest tag matches SmackDown has ever produced.

Fans were genuinely unsure as to who was going to walk away as the victors – the cohesive unit of Edge and Mysterio, or the strange bedfellows’ partnership of Kurt Angle and Chris Benoit. The four men put on a wrestling masterclass which dazzled the crowd and furthered SmackDown’s reputation as the home of wrestling during the original brand split.

Angle and Benoit walked away as the winners here, but each of these men left the ring looking like the best wrestlers on the planet at the time.

What is your favourite match in the history of the No Mercy event? Let us know in the comments below, and let Liam know on Twitter @liamhoofe