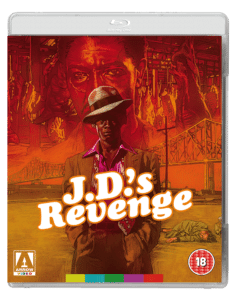 A young man’s life changes dramatically after taking part in a nightclub hypnosis act while out on the town with friends. He becomes possessed with the spirit of a violent gangster who was murdered in the 1940’s and is now out for revenge…

An entertaining slice of genre horror that moves away from and surpasses its Blaxploitation roots, J.D.’s Revenge takes a sure-footed look at supernatural possession, inner city crime and religious propaganda.

The calm and thoughtful law student Ike (Glynn Turman) is enjoying a night on the town with his friends, taking in New Orleans bars and night spots before venturing into a nightclub hosting a hypnosis act. The violent personality of a 1940’s mobster (portrayed with a haunting intensity by David McKnight) becomes embroiled with his own, gradually taking over and leading to a series of brutal attacks as the spirit in the body of Ike searches for those who led to his murder.

J.D.’s Revenge is a powerful mix of horror and social commentary that brings a surprising view of New Orleans life into play. The mysterious angles and architecture of the place combine with its unique religious history and imagery to provide a powerful backdrop for this unusual and affecting story. Becoming more complex and psychologically moving as it plays out, this is an urban thriller that offers far more than it initially promises. Fantastic suits and funk music too, natch.