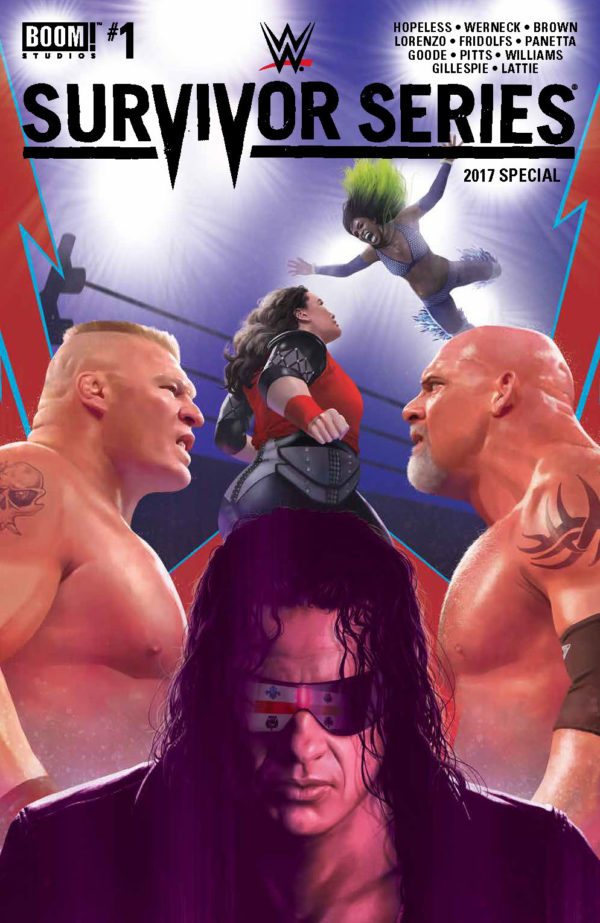 Back in August, when I reviewed Boom! Studios’ WWE SummerSlam Special, I finished the review by stating that I hoped the company would continue to provide these little nostalgia filled editions for each of the big events. The ‘big four’ wrestling events – Royal Rumble, WrestleMania, SummerSlam, and Survivor Series – all have a rich history, one that is ripe to be explored in the pages of a comic book. Survivor Series, the final big four events of the year, is perhaps the most interesting to explore. The event has become synonymous with surprises, debuts, big returns and of course, screw jobs.

Boom! Studios has lovingly crafted six such stories for their first Survivor Series special, exploring big events from the company’s past. Have they done these tales justice though? Let’s take a look…

There was one story that was guaranteed to make the comic, and that is the Montreal Screwjob, arguably the most controversial event in wrestling history. 20 years on from the iconic incident, and fans the world over still spend plenty of time dissecting the events of that night.

Boom! has done a fairly solid job of recapturing the events of that night. The whole thing is told from Shawn’s point of view and the relationship between Bret and Shawn is nicely focused on. What the story does choose to reject, however, is Shawn’s involvement in the incident, with him acting just as surprised as Bret when the bell rings. Focusing on Shawn’s internal battle heading into the ring really could have added a lot to this story, and it does at times leave the whole thing feel a little muddled.

The art-ork here, as it is through most of the comic, unfortunately, is fairly inconsistent. Shawn looks great in some frames, while in others he looks unrecognisable; there is also one scene where he is missing a nose, which is unfortunate. The in-ring stuff is great, though, and Michaels’ ring attire is nicely realised.

Many iconic wrestlers have made their debut at Survivor Series, and choosing one to focus on must have been a tricky decision. It seems, though, that it boiled down to the star who is the most relevant at the moment – Kurt Angle.

While Debut is only a short story, it is definitely the most impressive from a visual stand-point. The story sees Angle retelling his debut on what appears to be a radio show, and the resemblance with the Kurt Angle we see on Monday nights is near uncanny. Big credit should be given to illustrator Rodrigo Lorenzo here. This was a great story. I just wish it had been a little longer.

The one Survivor Series debut that the WWE probably want you to forget is the Gobbledygooker. The time a giant bird burst out of an egg is hardly up there with the arrivals of The Undertaker, Kurt Angle and The Shield, but Boom! decided it was, so here it is.

I mean, I don’t really know what I’m supposed to say about this story? It’s utterly ridiculous. Probably the most random story you will encounter in any of these comics, and well, I guess that’s wrestling. Make of this one what you will.

Of all the stories in this collection, the one I was the most excited to look at was 1 minute, 26 seconds. Why? Just take a look at that beautiful cover art by Rahzahh – Goldberg and Brock Lesnar look stunning (though, I still don’t know why Naomi and Nia Jax are on there?). Sadly, the depictions of Brock and Goldberg are nowhere near as impressive in this story. Goldberg looks consistently fine, but Brock fails to deliver. Brock seems to have been a problem for a lot of the artists working across these comics, which is a real shame because his super-human presence could make for an awesome comic book character.

The story itself is a nice little reminder of one of the biggest shocks in recent years from the WWE. The in-ring action is well reenacted, as is the surprise of the audience with the result.

The Root of all Evil

While The Undertaker is mostly acknowledged for his unrivalled Wrestlemania streak, the next biggest event that he is synonymous with is Survivor Series. The Deadman made his debut at the event back in 1990 and has taken part in many iconic moments at the event ever since.

This story chooses to focus on his debut back in 1990, and more specifically, the kayfabe events that took place before it.  We basically see Ted DiBiase hunting down Taker in Death Valley, and recruiting him to his team for Survivor Series. It’s all a little hokey, but that’s what made wrestling in the 90’s so much fun, and this story perfectly manages to capture that.  The artwork is, for the most part, fairly consistent, and this, alongside ‘Debut’ was the highlight of the comic for me.

The Shield: Called Up

The Shield’s debut at Survivor Series 2013 was one of the best Survivor Series moments in recent years, and it is not a surprise, considering how much focus is placed on the trio by Boom! to find them in the pages of this edition. Sadly, however, the very fact that they have spent so much focus on them before is this story’s downfall.

While the story itself does a nice job of adding kayfabe to the backstage antics prior to their debut, and it also adds a nice little kayfabe twist- I couldn’t help but think about the company’s better work in their on-going series based around The Shield. Another issue here was also the artwork, with the three characters really not resembling their real-life counterparts in the slightest.

Verdict: Survivor Series Special #1 is a real mixed bag. On one hand, there are some great stories (Debut, The Root of all Evil) and some nice nostalgia-inducing moments, but on the other, the comic is riddled with inconsistent artwork and at times, weak story-telling.

Liam Hoofe is a teacher and a writer who lives in Madrid. You can follow him on Twitter @liamhoofe