This week’s SmackDown once again opened with Shane McMahon in the centre of the ring. Shane was out to address the events of last week, which saw Sami Zayn and Kevin Owens pick up a victory over The New Day in a lumberjack match. Shane talks about how the match was Daniel Bryan’s idea, and that while it was great on paper, it failed in practice. He then invited Bryan out to the ring.

Bryan says that as someone who has been fired a few times himself, he believes in second chances and that Shane needs to stop letting his temper get the better of him. He says that firing Owens and Zayn would be a stupid move and that the duo would just jump ship to Raw. Shane says this would be fine as they would then become Stephanie’s problem. Bryan reiterates that Shane needs to trust him and that he isn’t just going to be a yes man. The segment ends with the two sort of agreeing and Shane making tonight’s match between Owens and Orton a no-DQ match and banning Sami Zayn from ringside.

I’m enjoying the rift between Shane and Bryan, I’m just growing tired of SmackDown becoming all about Shane. It’s been nearly three months now where Shane has basically been billed as the star of SmackDown, and it’s kind of tiresome. The WWE title hasn’t been featured in an opening segment in what feels like forever and the show needs a fresh injection of life.

We get a brief segment backstage where Owens asks Bryan to change the stipulation for the night, and Bryan says they are not the only one with their jobs on the line and tells them no. 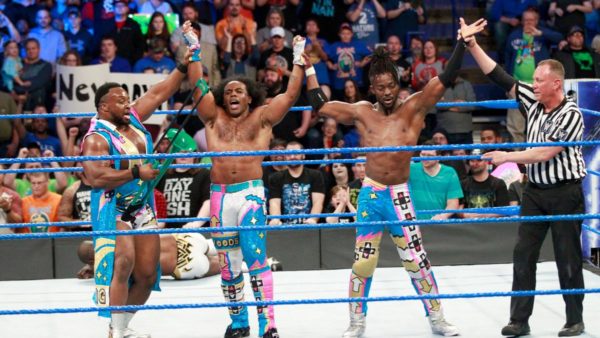 The New Day Vs Shelton Benjamin and Chad Gable is our first bout of the night. This match was a solid piece of tag team action, as you’ve come to expect from the four men in the ring. I particularly enjoyed watching Kofi and Shelton’s in-ring sequences here, both men are just so athletic. What was baffling, though, was the decision to put The New Day over, which just kills any momentum that Gable and Benjamin had. Does that now mean that The New Day are going to feud with The Usos, again? I suspect we may get a fatal 4-way tag match at Clash of Champions now – with these two teams, the tag champs, and likely Aiden English and Rusev. (Match Rating: *** 1/4)

After the break, we get a little backstage segment featuring Naomi, Charlotte and Natalya. The three are discussing their upcoming bout with Ruby Riot, Liv Morgan and Sarah Logan. Natalya agrees to put their differences aside for one night and focus on a common enemy, which means she is 100% going to screw them in some way.

The Bludgeon Brothers are out next for a rematch with The Hype Bros. Same match as last week, and the same result. The Bludgeon Brothers squash Ryder and Rawley, this time hitting the crucifix powerbomb on Ryder. (Match Rating:*) After the match, Rawley finally turns on Ryder and beats him down in the middle of the ring. This will likely result in a brief feud between the two, and then both of them will slip into obscurity once again. It’s not that either man isn’t talented, it just seems as though SmackDown doesn’t care about the lower mid-card right now.

Bobby Roode is being interviewed backstage about his altercations with US Champion Baron Corbin last week. Roode says that he knows someone who is better than Corbin and who will take his US title. Corbin appears and says Roode is scared of him. Roode challenges Corbin to a match tonight, but Corbin refuses and walks off. Nice little segment to keep the feud going, hopefully, Roode picks up the title at Clash of Champions, though, I suspect we may have to wait a little while yet.

The Singh Brothers are out on the stage introducing Jinder Mahal. Jinder and The Singhs make their way to the ring and out comes WWE champion AJ Styles to a massive pop. Styles is set to face The Singhs, but Jinder and the brothers beat him down in the centre of the ring before the bout starts. Once the bell finally rings, the Singhs beat down AJ for a couple of minutes before AJ fights them off and gets the win following a Styles Clash from the second rope, from one Singh brother onto the other. Nice spot and the match itself was fine. (Match Rating: **) Jinder comes in after the match but AJ has already left the ring. Jinder then takes out one of the Singhs, who sells like crazy before shouting down the ramp at AJ. I’m so tired of Jinder Mahal at this point. Hopefully, AJ beats him at Clash of Champions and he moves on. The WWE title is basically being given the mid-card treatment at the moment, and, well, that isn’t because of the champion.

We see Ruby Riot, Liv Morgan and Sarah Logan being interviewed backstage before their bout. They don’t exactly express a clear motive, I guess they’re just heels because they are, but they do give themselves the name ‘The Riott Squad’, with two ts,  which I must admit, is a much better name than Absolution. 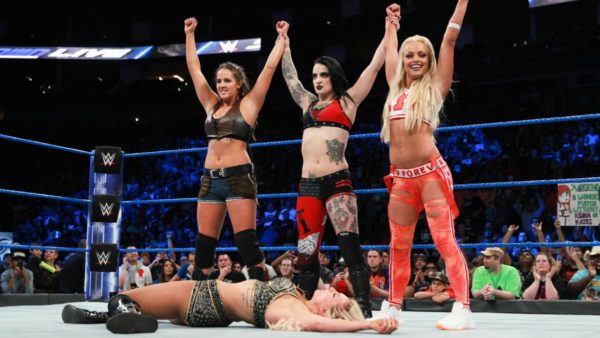 The Riott Squad Vs Charlotte, Naomi and Natalya is up next. It’s a fairly solid debut from the former NXT women, and there is some good storytelling in the match. The in-ring stuff is a little slow and sloppy at times, but that is to be expected. Natalya, inevitably, leaves her teammates, and then The Riott Squad take out Naomi on the outside, using the steel steps. Charlotte fights valiantly, but the three women are too much for her and The Riott Squad pick up an impressive victory. (Match Rating: ***) While the in-ring stuff wasn’t exceptional, I enjoyed the divide and conquer approach of the group, and giving them a victory over three former champions is a nice way to make a statement. Will these guys have some sort of alliance with Absolution? Potentially, if so, expect it to be seen at Clash of Champions.

We get then a new episode of the Fashion Files, with these week’s edition poking fun at the Saw franchise. It was just what you’ve come to expect from these segments, and I like The Ascension’s continued involvement. Is it going anywhere? Doesn’t really seem that way, but it’s still a nice little distraction for two minutes, I guess. 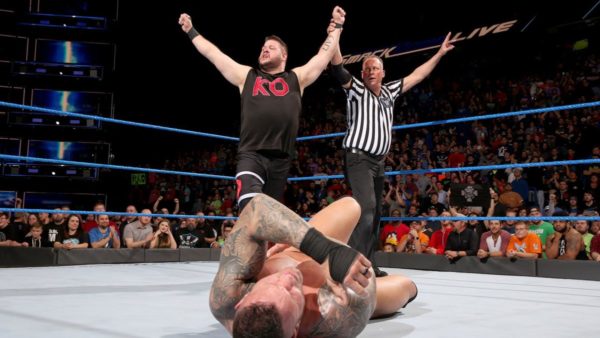 The final match of the night is Kevin Owens against Randy Orton. Firstly, can I just comment on how distracting Randy’s new haircut is? Get the clippers out again, mate, seriously. The match itself, though, was great. The two men utilised the gimmick well, using a number of weapons and fighting their way through the crowd. Zayn came out and attacked Orton with a chair at the top of the ramp – which apparently avoids the ‘not being at ringside’ rule. Orton still manages to regain momentum despite this, but Owens cuts him down when he goes to hit an RKO and picks up the victory with a frog splash. Great match to close the show. (Match Rating: *** 1/2)

Verdict: This week’s SmackDown was a fairly solid effort. The main event was great and the show had a few other really good matches. I’m enjoying the Zayn and Owens stuff, but I’m getting a bit bored of Shane McMahon. The lack of stars like Shinsuke Nakamura makes me sad but the episode went by at a reasonable pace and there were no really bad segments.