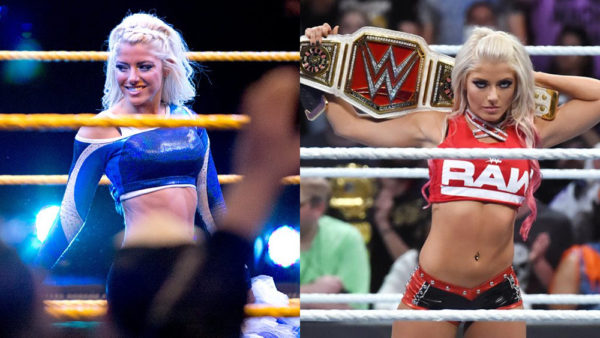 If you were to watch WWE programming for the first time today, you’d be left absolutely certain that Alexa Bliss is a nasty piece of work. The self-proclaimed ‘Goddess of WWE’ is a snarky bully who will take any shortcut imaginable to hold on to the Raw Women’s Championship, which she has held almost consistently since April – but for nine days when she was dethroned by Sasha Banks – in a real reign of terror and dominance.

You’d find it tough to believe that the powerful, aggressive champion started life in the WWE being compared to Tinkerbell by Renee Young.

Bliss made her debut on 8th May, 2014 in the first round of a tournament for the then-vacant NXT Women’s Championship. She was dressed all in blue, blew a handful of glitter over the entrance stage and was met with a cry of “she’s like a little fairy” by announcer Renee Young, who went on to describe her as Tinkerbell. Rich Brennan then said she was a “graduate of the University of Bliss with a major in bedazzling”. It couldn’t be more different to her ‘Five Feet of Fury’ character from today.

For a long time, this was Bliss’s character. She impressed with her athletic ring work and won sympathy as a babyface when she got the chance to feud with Sasha Banks for the title in March 2015. She was the epitome of a whiter-than-white hero character – a lovable loser.

That all changed in May of 2015 at NXT TakeOver: Unstoppable. Bliss injected herself into an NXT Tag Team Championship bout, helping Wesley Blake and Buddy Murphy – to whom she is now engaged outside of the wrestling world – to retain their titles. This marked an abrupt and major change in Bliss, who was no longer a timid fairy. She immediately became a smack-talking villain with a clear position of authority over the tag champs, whom she referred to as “her boys”.

At the time, this seemed like a bizarre left turn for Bliss. She had been building real momentum as an underdog babyface and seemed destined for championship glory in the future. Questions were immediately asked as to whether the sparkly, smiley blonde bombshell could manage the same sort of fan reaction as a villain, particularly given the fact Blake and Murphy’s title reign appeared almost out of nowhere and they had little heat.

In subsequent weeks, she continued to interfere in matches on behalf of Blake and Murphy and attacked their opponents after the bell. It’s in these episodes we can see the initial beginnings of the Bliss character we know so well today. She has a tremendous grasp of facial expressions and the line delivery required to be convincing as a heel. Bliss proved to be exactly what Blake and Murphy needed, with the trio forming the perfect team.

The heel persona also helped to improve Bliss’s ring work. She maintained the athleticism that got her over, but she also developed stiffer strikes and the persistence of a pitbull with a bone in its mouth. The same diminutive size that had made her so memorable as a David against the Goliaths of Charlotte Flair or Paige now made her a scrappy, tenacious villain.

A year later, Bliss turned on Blake and Murphy, remaining a villain and striking out on her own. It was little surprise when she was elevated to the main roster during the initial brand split draft. She was a supporting player in the early days of the SmackDown Live women’s division, but was soon elevated to top heel status.

She became memorable as a result of pop culture inspired ring attire that saw her channel the likes of Harley Quinn, The Riddler and Freddy Krueger. The Quinn outfit at Backlash 2016 inspired an entire WWE.com photoshoot and sparked an interest in the Bliss character that had not existed before. Despite the popularity of these outfits and the buzz they generated for Bliss on social media, this never triggered a move towards a babyface persona. Bliss maintained her outward disdain for the WWE Universe and, particularly, their anointed golden girl Becky Lynch.

Bliss snatched the title from Lynch in a shock tables match victory in December and held the title on and off until her move to the Raw brand in April 2017. She has since been the centrepiece for the Raw women’s division, taking part in memorable battles with Bayley, Sasha Banks and Mickie James. At Survivor Series last month, she battled Smackdown Live champion Charlotte Flair in a losing effort that nonetheless established her as one of the top women in the company’s recent history.

Everything about Bliss since her move to the main roster screams star quality. Her acid-tongued promos are streets ahead of many of the other talkers in the women’s division and her commitment to her character is unwavering. She has described her persona as “that mean girl that everyone knew in high school” and it’s that simplicity that helps it to work so well. She’s arrogant, but she can back it up in the ring, and that’s what makes her so easy to dislike.

In an era where heels are frequently cheered, Bliss is an expert at turning the crowd against her, with one perfectly judged line or a movement in the ring. She is beginning to receive a more positive reaction, but this has not diluted her character’s compelling acts of villainy.

Everything from her swaggering, dismissive walk to the ring to her unconventional way of displaying the title on her shoulder enhances this dislikeable persona. She has gone from being the all-American cheerleader with a peppy smile on her face to the way that cheerleader acts when she’s in the school halls – like an untouchable Queen Bee.