This week saw the release of a new BBC Sitcom to the now online only channel, BBC3 (showing on iPlayer now). The show in question is Chinese Burn. Written by and starring Yennis Cheung and Shin-Fei Chen, the idea of the piece was seemingly twofold. In the first instance it’s part of a BBC push to promote ethnically diverse talent. This is obviously a good thing and it allowed Cheung and Chen a platform to create a show, partially based on their own experiences of being Chinese and living in the UK (or specifically London). 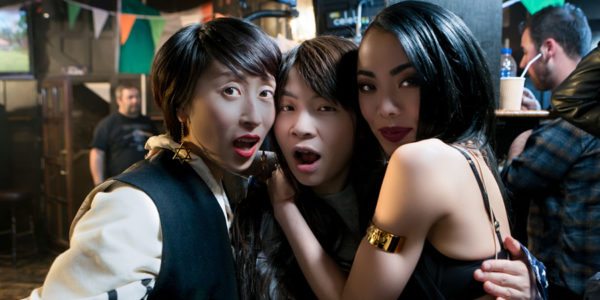 The second aspect comes from the writers themselves, both aspiring actresses fed up with being put up for the same old roles (take-away worker, illegal immigrant, prostitute), who want to challenge the stereotype of the Chinese woman in London particularly. Now it’s not a show that’s going to pick up a huge audience. It will live or die on word of mouth, but I’d got wind of it on my radar a few weeks before release. There were a few pieces doing the rounds on the web in anticipation and one or two brief conversations with the two main orchestrators of Chinese Burn. Somewhere along the way an expectation among the Chinese audiences awaiting it got slightly skewed in some corners. Yes there was promise that this would ‘kick that shit in the ballbag’ as far as certain stereotypes go. Then on the flipside an assumption perhaps formed that in the place of some negative (or perhaps ignorant) stereotypes (wanting to please men, loving ping-pong, badminton etc) there would be a positive and empowered characterisation of three Chinese women in London (the third played by Yuyu Rau).

The show has now been released upon us. The reviews have been mixed. I’ll offer more of my thoughts on the show as I progress but the consensus has been that the show does nothing to show Chinese women in a positive light. Further, the depiction of Chinese men has been contentious to say the least. Here’s my problem with many of the reactions, and that is context. This is a sitcom. Now of course some people just didn’t find it funny. If that’s purely the case then fair enough. A sitcom’s primary remit isn’t necessarily to challenge stereotype and enlighten. It’s to entertain. Likewise it’s been said by a few viewers that the central characters are unlikeable.

So lets just pull back objectively for a second. Look at some of the best sitcoms of all time. There’s a common strand. In the majority of cases the principal characters are inherently flawed. They’re people that in ordinary life would range from annoying, to despicable, unlikeable and occasionally grotesque. We don’t generally look at sitcoms to find positive role-models. To call Jackie (Cheung) and Elizabeth (Chen) positive role models for young women is wrong. Jackie in particular is aggressive, selfish, and mirrors the stereotype of the twenty-something British ladette. Elizabeth is in theory the grounded character. The straightest of the three leads. She’s deeply flawed but there are nuggets of a potential development. If anyone will have a series arc that delves into any emotional resonance, it’s going to be her. Meanwhile Fufu (Rau) is pure craziness. You could call her the Kramer of the piece. I didn’t quite click with the other two in the first episode. Somewhere along the way this was getting slightly miss-sold. Fufu I liked because there’s no defining logic to her. As there wasn’t with Father Jack, or Super-Han’s. Her job is to be eccentric and a caricature with strands of recognisable characteristics.

Part of what makes a sitcom click is in making the inherently unlikeable characters appealing. When comedy gets it right, we suddenly start rooting for Alan Partridge or George Costanza despite some of their more deplorable behaviour. It’s not just in making those characters likeable though, a good comedy writer will create characters that perfectly represent a certain fact. We’re all horrible. We’re all bastards. We just have certain levels of it. We can see clearly for example that Donald Trump is an A class bastard of the highest order. It’s all about observations though. I’ve sat and watched Partridge, or Peep Show and they’re hilarious but there are these brief moments where you suddenly realise that you have been the same. I’ve been Mark Corrigan. I’ve been Jeremy. Maybe just certain moments but in their awfulness or teeth grindingly pathetic moments they show something most of us have been through. When we laugh at horrible characters we’re also acknowledging that we’ve done the same (okay, I’ve never gone as far as accidentally killing and cooking someone’s dog, lets be clear there). I’ve said things and taken a step back from myself and realised it could quite easily have come from the mouth of Alan Partridge.

But this leads us to another aspect in comedy. That is stereotyping. The thing about a stereotype is, that there’s always a grain of truth. Times change, people change and the level of truth to some stereotypes may diminish. Likewise every gender, ethnicity, class have both positive and negative stereotypes. As I’ve said before, the natural leaning for most sitcoms is to focus on the negative as that side of things opens up more caveats for the ridiculous. What Chinese Burn should be looking to find is that balance between challenging stereotypes that the creators find frustrating, but at the same time making light of some of the others. You have to embrace your stereotypes (this is what they’ve strived for to be fair, to mixed results) and ridicule them. Ricky Gervais did that with sublime subtlety in The Office. Seinfeld playfully adheres to and makes light of Jewish stereotypes (See also Everybody Hates Chris and black stereotypes).

Chinese Burn wasn’t perfect but by the same token it wasn’t the horrific misfire it’s being called out as in some corners (others get it, and love it). It wasn’t racist. There’s a misconception possibly spreading on message boards that this was yet another sitcom about an ethnic group written and created by middle class white men. The protagonists are Chinese women living in London. The writers are the same. Do we want to see entirely positive views on them, and their community? Not really because that wouldn’t make for good comedy. The opening show was a mixed bag. It misfires a lot. A point of contention as I mentioned before is the depiction of Asian Men. All hopeless, desperate and unable to get within five feet of a woman without expelling gentleman’s juice from their one inch shmeckles. Cheung’s character goes further to suggest that she finds Asian men completely repulsive. Again, I get that Asian guys may watch the show and find it tiresome in that regard. The thing is, most people watching a comedy show can make the distinction between a writer’s view and a character’s. It’s Jackie, as a character who perpetuates the idea that Asian guys are not attractive. As writers of course, the two leads make a fatal error. It’s not so much the constant recurrent appearance of one particularly pathetic Asian male character (who perpetually hounds Elizabeth), it’s that cardinal comedy sin of repeating the same gag over and over. Had they just done a simple “one inch dick” gag (which I read more as a spin on Bruce Lee’s one inch punch), it wouldn’t be so contentious. The gag doesn’t really work. When it falls flat once, it’s only going to get worse.

In actuality none of the male characters in the piece come across well. There are a few well observed traits throughout of course, but honestly, is it so bad to see men getting absolutely shredded having been written by women? It’s about fucking time. Call it comeuppance for the last 2000 years of art and literature shall we?

What I did notice among the scatter-shot gags, a few of which landed were good observations. From casting directors, to the far flung influence of Chinese parents (I know this as my wife is Chinese and my father-in-law is currently over from China and staying with us…in a one bed flat…for 6 months…) to the casual ignorance of the landlady who keeps assuming her Chinese tenants are actually Japanese and want to eat her dog. People can’t help it I suppose. It doesn’t always come from a mean place but they do it. Every good sitcom needs to play to a few stereotypes and have fun with them. A casting director, as Jackie auditions to be a prostitute, asks “do you know martial arts?” It’s a basic observation, it rings true but this is what I talk about when I say finding that balance. The scene payoff sees Jackie kung-fu kicking a camera over in frustration. That to me is a moment where the balance is right.

In the end this isn’t about enlightenment. This isn’t Rosa Parks, there’s no blazing of trails here. You take those positives, giving emerging ethnically diverse talent (and indeed more female talent) a chance, and you challenge a few stereotypes but make fun of certain others. You need to embrace the bad stereotypes in comedy and have fun with them. If people don’t like how “they” are being portrayed, they’re not coming into this in the right spirit. This needs to be rated in the right way. There’s definitely a long way to go and the writing duo could certainly benefit from a comedy specialist to help hone their vision, but at the same time, sitcom upon sitcom has opened to middling reviews. It’s the rule and not the exception that a sitcom will start slow. This needs to improve for certain, but by the same token it should be afforded the same time and respect many other comedies have been afforded to do so. We’ve seen the beginning but we haven’t yet seen the real Chinese Burn.