No Stephanie or Triple H to start this week’s Raw, instead Raw general manager Kurt Angle is out to a nice pop to start the show. Angle is out to announce some of the night’s matches, and just as he is about to reveal Roman Reigns’ opponent for the night, Jason Jordan makes his way out to the ring. Jordan is doing his usual ‘just give me a chance, dad’ shtick, and Roman then makes his way to the ring to a mixed reception. Roman tells Jordan that if he wants his chance, he needs to step up and take it, and stop whining to his dad. Samoa Joe’s music hits to a big pop. It’s kind of amusing that Joe, the biggest heel in this segment, got the biggest pop after Angle.

Joe says he accepts Reigns’ challenge and gives Roman 5 seconds to retract it before he gets hurt. As Joe is counting, Jordan attacks Reigns from behind. I loved Joe’s work here, the five-second challenge was a really great touch. Reigns is pissed when he gets back on his feet and tells Joe he can wait, he wants Jordan now.   This was a surprisingly great opening segment; I enjoyed the character work from everyone, it followed logically, and it set up a nice narrative for the night. More of this week each week, please. 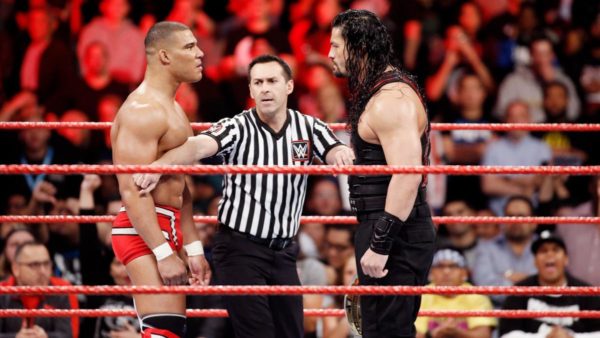 Reigns and Jordan are kicking things off then, and Reigns’ title will be on the line. The two men, despite their constantly negative crowd reactions, are both splendid performers in the ring, and you’ve had to just be a cynic to have not appreciated their work here. Jordan reminded us that he is more than capable between the ropes, and Reigns sold for his opponent very well, making him look like a viable challenge, just like he did for Elias last week. Reigns picked up the victory in the end of a match which was only ruined slightly by two ad breaks. Great start to the night from an in-ring perspective (Match Rating: *** 1/2 ). Joe attacked Reigns after the match, Jordan attacked Joe to save Reigns, and Reigns hit a Superman punch, knocking Jordan between the ropes. Great opening for Raw all around.

Kurt is backstage getting a grilling on the phone when Jordan comes in and demands a match with Joe for later in the night. Just as he is trying to explain himself to his dad, Joe comes steaming in and leaves Jordan looking like a crumpled wreck on the floor. Kurt tends to his son while Joe talks smack to Kurt on his way out. Love it.

Alexa Bliss is on commentary next for Paige Vs Sasha Banks. It’s been quite some time since we saw Paige in a WWE ring, but she showed little sign of ring rust during this bout. Paige and Sasha were given plenty of time to show us what they could do here and the duo delivered for the most part. Paige’s character stuff was great, and her constant ability to find the bottom rope was a nice touch. Absolution made their presence felt in the end, with the team brawling with Bayley and Mickie James on the outside. This led to a distraction, allowing Paige to hit her finisher for the victory. This was a nice match (Match Rating: ***1/4). Absolution have been really enjoyable since they made their debut, and they’ve made the women’s division feel really important once again.

Kurt is being hassled backstage once again, this time by Elias. Elias says he is going to perform for the crowd later tonight, and that he wants another shot at Roman Reigns’ belt, and accuses Kurt of showing bias towards his son. Kurt says he will find Elias a worthy opponent for later in the night.

We get a nice little video package for Kane V Braun, which means one of the two is obviously not around tonight, probably Kane.

We then see Enzo giving the zo train a little pep talk before tonight’s cruiserweight qualifier. Nice to see the cruiserweights given some backstage segment time, even if they are just being lectured to by Enzo. Nia Jax shows up after and looks smitten with Enzo. Strange.

Cedric Alexander Vs Mustafa Ali Vs Drew Gulak Vs Tony Neese is up next. The winner of this bout will face Rich Swann next week to determine who will be facing Enzo Amore for the Cruiserweight title next. If there was ever an argument as to why the cruiserweights deserve more time on television, this is it. The four men put on a great show here, and the multi-man match format really allowed each man the time to show off their move sets and their characters. You could hear the crowd slowly becoming increasingly more interested as the match went on. The four men were given a lot of time to show what they were capable of here, and they did just that. Drew Gulak picked up the cheap victory, stealing a pinfall away from Cedric Alexander to advance to the final next week (Match Rating: *** 3/4).

Elias out to perform for us, and he is very quickly interrupted by The Monster Among Men, Braun Strowman. Elias quickly exits the ring and then tries a sneak attack on Braun. Bad move, Elias. Braun then proceeds to throw Elias around like a rag doll until Kane’s music hits and the Big Red Machine challenges Braun to a match on next week’s Raw. Nothing wrong with this at all. It’s always a treat to see both Elias and Braun, even if it is only brief.

We get a little backstage segment hyping the main event – the tag title match between The Shield and The Bar. It’s always good to see these three interacting with each other, especially as they had little to no focus in the last episode of Raw. Dean has forgotten they have a match tonight, which seems like a throwaway joke, but I suspect Seth’s frustrations with Dean will grow in the coming months, leading to Dean losing it and turning on his partner just before Mania. 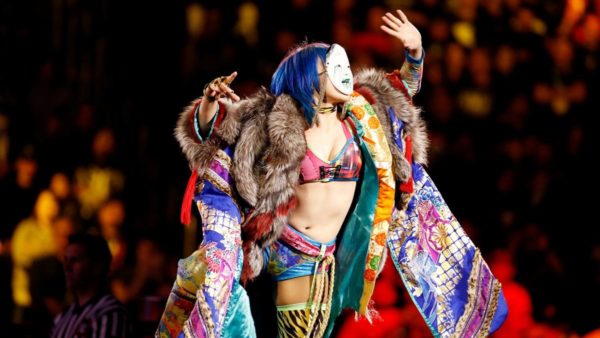 Asuka is out to make quick work of Alicia Fox next. I’ve enjoyed Fox’s work over the last 6 weeks or so, but she is still no match for Asuka, and The Empress of Tomorrow dispatches of her within 2 minutes (Match Rating: N/A). Asuka is finally starting to build some steam heading forward. Absolution comes to the ring and Asuka leaves once again. The group then attack poor Alicia. The Absolution/Asuka stuff is very intriguing.

Finn Balor is out for a match against Bo Dallas. Good, a nice little squash to make Finn look important again, right? Wrong. Finn does get the victory here but Bo is made to look fairly competitive, and despite Michael Cole trying to tell us Bo is a serious challenge for Finn, no-one is going to buy that. Nice to see Finn get a win, but he is just being booked like an after-thought, and why make Bo Dallas look this good in the process? (Match Rating: *)

It’s finally here! After a quick video recap showing us the events of last week, we get a video package featuring both Bray Wyatt and Matt Hardy. And it looks like the WWE isn’t messing around, Matt Hardy has gone full broken on us. Well, woken. This segment was awesome, and the crowd lapped it up. It looks as though we aren’t going to be getting a watered down version of the gimmick as we all feared, as Matt seemed fully ‘woken’ here, with crazy references to Cleopatra, Plato and space and time. Wyatt played his part well here, and it looks as though the two could bring the best out of each other. Don’t mess this up now, WWE!

The Tag Team Title match between The Shield and The Bar is up to close the show next. We know what to expect from these four guys in the ring and this point and they delivered strong again last night. The tag team stuff was great and Ambrose and Rollins are always a joy to watch together, while Sheamus and Cesaro have been the perfect foils for them in terms of in-ring style. Ambrose and Rollins picked up the DQ victory when Sheamus kept beating down Dean in the middle of the ring.

Kurt Angle wasn’t having any of it, though, he demanded the match restart as a no-DQ. The two teams got straight back to it, and Samoa Joe ran down to attack Ambrose and Rollins. Reigns came out to even the numbers and amid the chaos, Sheamus picked up the victory with a brogue kick on Ambrose. (Match Rating: *** 1/2) Joe and The Bar exited together to close the show, and we will likely see a 6 man bout next week on Raw. I’m down with that.

Verdict: What an awesome edition of Raw that was! The in-ring stuff, Finn Balor Vs Bo Dallas aside, was great and it was nice to see everyone given plenty of time. Every match, aside from the Asuka squash and The Balor bout went over 10 minutes, with two of the night’s matches going for 15. The cruiserweights looked good, there was no Stephanie McMahon ruining things, all storylines were progressed nicely, and best of all, we finally got to see Woken Matt Hardy! Good stuff all around.

What did you think of this week’s Raw? Let us know in the comments, and let Liam know on Twitter here @liamhoofe