SmackDown begins this week and surprisingly, Shane McMahon isn’t out to start the show. Owens and Zayn make their way to the ring and address last week’s main event. The two run down the McMahon family and mention Stone Cold Steve Austin and his encounters with them in the past, they also reference Randy Orton just being a hired gun for the McMahons these days. Sami walks around the ring, explaining how he didn’t break the rules last week, while also taking cheap pops at the commentators and the fans.

While this is happening, Orton hits an RKO out of nowhere on Kevin in the ring. Sami begins to retreat up the ramp and then, of course, outcomes big Shane. Shane announces that Orton and a partner of his choosing will face Zayn and Owens at Clash of Champions and that Orton will face Zayn tonight and Owens will be handcuffed to the ring. This wasn’t a terrible opening segment, and I enjoyed Zayn and Owens’ heel work, I am, however, beginning to wonder where all of this is heading at this point.

We find out that later tonight Bobby Roode will be facing Baron Corbin and The New Day will be facing Aiden English and Rusev. Interesting that these matches are taking place tonight, as they were both on the originally rumoured card for Clash of Champions.

A Little backstage segment where Owens is selling Randy’s RKO and acting as though he didn’t hear Shane’s announcement. He says he’s off to speak to Daniel Bryan. 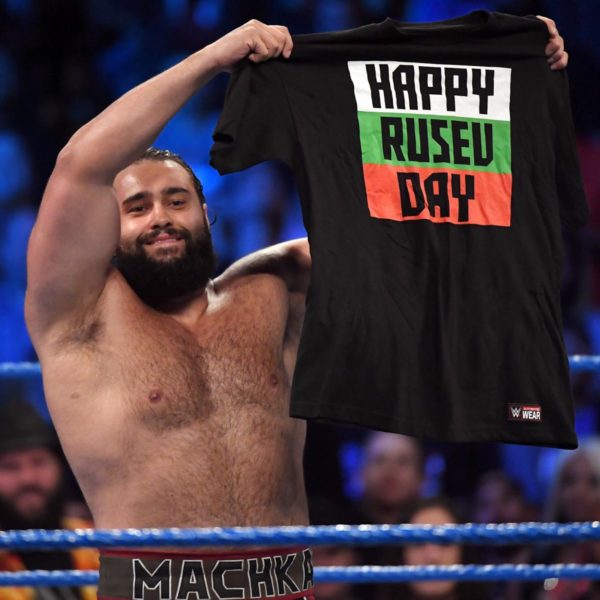 Rusev and Aiden English are out for their match against New Day next. I loved their opening ’12 days of Rusev’ segment, even if it was cut short, these two guys are a revelation together, and while I would love to see Rusev in the main event, I am enjoying his current run with English. Rusev seems destined for a face turn in the near future, I just hope they give these guys a lengthy run together. Turns out they are also pretty great in the ring with each other as well. This match was a great way to start the night from an in-ring standpoint, and The New Day continued their fine streak of performances here as well. Kingston, Big E, Rusev and English all brought something a little different to the bout and it was a highly enjoyable affair with some nice tag team spots. Rusev and English picked up the victory, which basically secured their place in the tag match at Clash of Champions, I’m down with that. (Match Rating: *** 1/2)

Next, we see a backstage interview with Mojo Rawley who is explaining his turn on Ryder last week. Mojo says that he turned on Ryder because when he was solo, he won the Andre the Giant Battle Royal, and ever since Ryder has returned, his stock has dropped week in, week out. Makes sense, just amazing it took him so long to realise. Rawley could make a nice addition to the mid-card on SmackDown and this was a good little promo.

After this, we see Bryan being harassed by Carmella, Lana and Tamina about the title match between Natalya and Charlotte at Clash of Champions. They are quickly joined by the Riott squad, with Riott claiming she has a right to face Charlotte because she pinned her last week. The women start arguing and Bryan decides to make the match at Clash of Champions a lumberjack match, which appears to be his new favourite gimmick this month. Could this lead to a Carmella clash in when all hell inevitably breaks loose?

Yet another backstage segment, this one featuring Roode and Corbin. The two are arguing about Clash of Champions when Ziggler steps in and reminds them he is a two-time world champion and that neither of them has a chance. Bit of a strange segment, with Roode and Corbin both arguing that they had a tougher task at the event. Still not sure why Ziggler has been added to the bout. I guess it’s so they can protect Roode until they decide to give him the belt?

The Bludgeon Brothers are out to squash a pair of local talent next. Rinse and repeat formula from their matches with the Hype Bros the previous two weeks, basically. (Match Rating: NA)  It will be interesting to see whether these guys end up in the title scene, or whether they just continue to squash jobbers for the next month or so. Luke Harper had a kid this weekend, though, surely they could have given him the night off here.

Sami and Zayn are backstage again. Owens says he’s spoken to Bryan and that Bryan said he will think about changing tonight’s stipulation. The two hug. Awww, fwendds.

Baron Corbin Vs Bobby Roode is next. The match was the standard Corbin affair and did very little to inspire if I’m being honest. Ziggler, who was at ringside for commentary, interrupted, giving Roode the DQ win. Like I said earlier, I really don’t get why Ziggles has been added to this bout, there is no real reason for it whatsoever. I have a feeling Corbin will be retaining at Clash of Champions, and I think that is why Ziggler has been added, but I think giving it to Roode would be the best thing right now. (Match Rating:**)

There’s a little backstage segment featuring Natalya, Tamina, Lana and The Riott Squad. Natalya sucks up to the group in an attempt to get them on her side for Clash of Champions. While I kind of understand the logic in this, The Riott Squad interacting with everyone has softened their impact a little. They have just come out and kicked ass the last two weeks, this week they all seem fairly chilled out.

Women’s champion Charlotte is out for her match with Tamina next. Lana, Carmella and Natalya are at ringside for the bout. This was a perfectly fine bout between the two second-generation superstars here. Tamina just feels like she is going nowhere on the SmackDown roster and it’s a shame because if she was given the correct booking, she could be in a much better position. Charlotte picked up the victory with the figure 8. (Match Rating: **1/2) After the match, Natalya gets on the mic, only for The Riott Squad to come out to ringside, and well, didn’t really do much, actually. The group had a scrap with Lana and Tamina, but that was it. This seemed kind of stupid really and didn’t benefit any of the women involved.

We see Owens making one last plea to Bryan before tonight’s main event. Bryan tells Owens that actually, he agrees with Shane, and some security guards arrive with handcuffs for Owens. 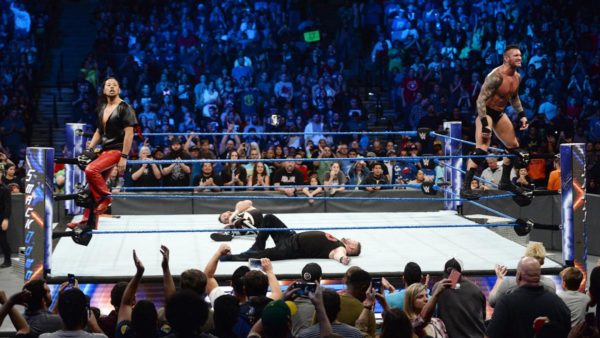 The night’s main event is up next, Sami Zayn Vs Randy Orton. Orton has been putting on some enjoyable bouts with Owens and Zayn these last few weeks, and this was no exception. Owens’ presence at ringside was enjoyable, while Zayn, who was dominated for most of the match, was great. Everyone here played their roles well, and it was a fun main event. Owens, inevitably, broke free of the handcuffs, but Orton dealt with him quickly. Orton picked up the win with a roll-up after Zayn missed a helluva kick.  (Match Rating: *** 1/4) After the match, Owens attacked Orton from behind when Shinsuke Nakamura’s music hit. Nakamura and Orton then beat down the duo to close the show. We do get one last twist added to Clash of Champions though. Owens and Zayn will face Shinsuke and Randy, and Shane McMahon will be the special guest referee, and if Owens and Zayn lose, they will be fired from not just SmackDown, but the WWE.

The booking here is strange, in that Shane is legitimately starting to come across as a bit of a bully. However, I think that may well be the case, and that Bryan may get involved and clash with Shane at Clash of Champions. The two have been teasing tension for a while, and having Bryan stop Shane at Clash of Champions makes sense. Though, the whole face/heel scenario is likely going to become fairly muddled in that scenario.

Verdict: This felt like a fairly forgettable edition of SmackDown this week. After last night’s excellent episode of Raw, this felt fairly uninspiring and the absence of AJ Styles was really felt here. I enjoyed the tag bout early in the night, and the main event but nothing else particularly grabbed my attention. It wasn’t bad, just very average.

What did you think of SmackDown this week? Let us know in the comments, and let Liam know on Twitter @liamhoofe