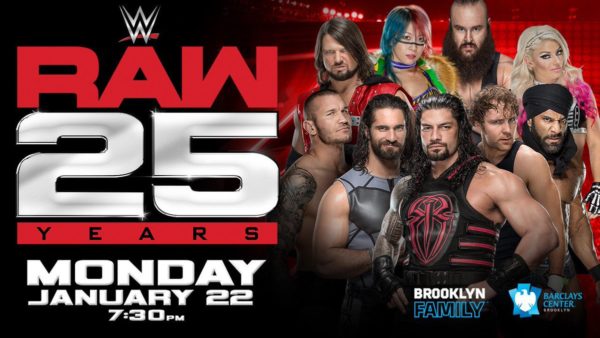 WWE has confirmed several more stars for this Monday’s 25th Anniversary edition of Raw. Former United States champion MVP has been confirmed for the event and so has the former announcer and Raw General Manager Jonathan Coachman. Several Smackdown stars have also been announced for the event, including AJ Styles, Charlotte Flair, Jinder Mahal, The New Day, The Usos and Randy Orton. Just how WWE is going to fit all of these superstars into three hours is anybody’s guess but it looks like this edition of Raw is definitely going to be worth staying up for.

It seems that Wrestlemania season is a prime-time for wrestling injuries, and this year is no different. Superstars Samoa Joe, Jason Jordan and Kevin Owens are all injured at the moment and the last day has seen updates for all three stars.

Dave Meltzer, in the recent instalment of the Wrestling Observer Newsletter, revealed that Samoa Joe’s injury is worse than first expected and what was originally a matter of weeks now looks to be a matter of months. Concerning Kevin Owens, Meltzer claimed that Owens is carrying ‘nagging injuries’ and that the company are resting him in the lead up to next Sunday’s Royal Rumble PPV. Finally, PWinsider is reporting that Jason Jordan is being held off this weekend’s Raw events but he will be present on Monday Night Raw, though, it seems likely he won’t be wrestling until the Rumble.

On a rather slow news day in the wrestling world, here is a video of Triple H and Stephanie McMahon lip-syncing to Moana’s ‘How Far I’ll Go’ from last night’s Tonight with Jimmy Fallon, just to brighten up your weekend and keep you ticking over until Monday night. The New Day also appeared on the show with Triple H and Stephanie, and performed a lip sync version of Boyz 2 men ‘Motownphilly’.