Raw starts with a recap of last week’s match between Samoa Joe and Roman Reigns before Reigns makes his way to the ring to a mixed, but mostly negative reaction. Reigns talks about his victory over Joe and how he won because he was fighting for a purpose. He talks about Dean Ambrose and how if anyone hurts one member of The Shield, then they have the rest of the group to contend with.Jason Jordan hits the ring and tells Reigns that he finally feels like he is a part of something, and he extends his fist to Reigns. Reigns looks bemused. Jordan’s character work at the moment is spot on – he is such an annoying presence and there is no doubt that is what the company are aiming for. 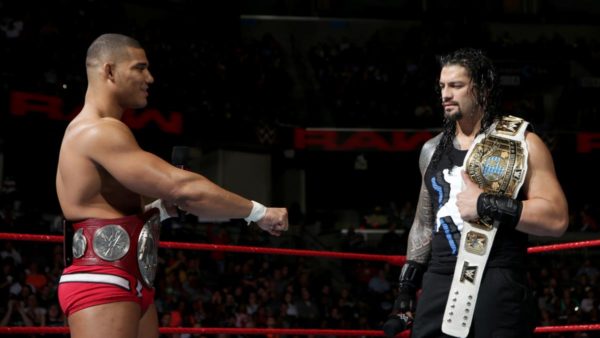 Rollins come out and tells Jordan he has a lot to learn, and Jordan begins rambling about how they are the most dominant three-man group in the WWE and this prompts the arrival of Finn Balor and The Club. The group gets a fairly decent pop, and they come down to the ring and have a mildly amusing exchange with Reigns, Rollins, and Jordan before Angle comes out and announces that the six men will meet in tonight’s main event match. As opening segments go, this one was fairly entertaining – the Jordan heel turn angle will no doubt set up a bout between him and Rollins at Mania, while The Club return is nice to watch, even if it does feel a little forced. This should be a fun main event.

Bayley and Sasha Banks are out next for a match against Sonya Deville and Mandy Rose from Absolution. Rose and Deville are accompanied to the ring by Paige, who is currently nursing an injury. The match itself is a solid encounter and Bayley and Banks pick up the win when Banks locks in the Banks Statement on Rose. (Match Rating: ** 1/2) It was nice to see the two other members of Absolution show us what they can do with Paige out and the two managed to hold their own against two of the best female wrestlers in the industry today.The company are smart to give Banks and Bayley a win heading into the Rumble.

Goldust is backstage hyping up Cedric Alexander for his bout with Enzo Amore later tonight. Rumours have begun to surface online that Goldust will be making a transition to 205 Live pretty soon. While I understand that getting an established veteran on the show may help draw in viewers, Goldust hardly qualifies as a cruiserweight. Maybe he will just be a manager for Alexander.

Matt Hardy Vs Curt Hawkins is next in what is Broken Matt Hardy’s in-ring debut in the company. Of course, the match is a squash but Hardy does some great character here, as always. (Match Rating: N/A) After the match Bray Wyatt appears in the ring, he and Hardy square off and laugh maniacally in each other’s faces as we cut to a break. The two men are likely to meet at the Rumble, and I expect this feud could even be carried through to WrestleMania.

Elias is out next to open up the Miz TV segment. Elias sings a little about Elvis before introducing The Miz. The Miz comes out to one of the biggest reactions of the night and gets in the ring to address his return. Miz says he is done with The Marine 6 and he is back for business, he thanks Dallas and Axel for their work since he has been gone and this leads to the duo doing some terrible comedy routine about how much they love The Miz, basically.  Once that is done with, The Miz addresses losing his title to Reigns and talks about how he is the best Intercontinental Champion, etc. This was a great segment – it’s always nice to see Elias on Raw and having The Miz return with such intensity instantly establishes his feud with Reigns. 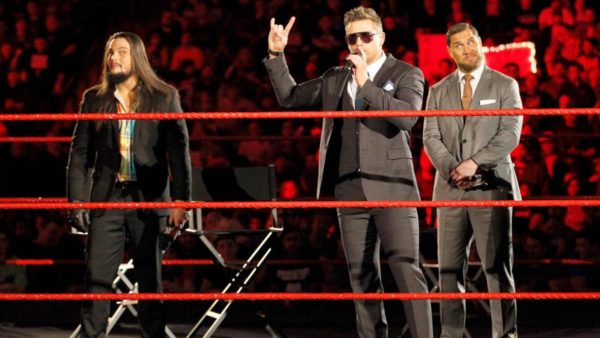 We see The Balor Club boys talking backstage about their upcoming match and generally just having a bit of a laugh. The three men genuinely seem to enjoy working together, I hope they get given a proper run in the company.

Enzo Vs Cedric Alexander for the Cruiserweight Title is up next. Enzo addresses his absence from last week’s Raw before things get started here. The two men put on a solid encounter and Enzo has really improved in the ring over the last few months. Enzo took a nasty bump at one point in the match and it looked as though he was legitimately injured. The match ends when Enzo got counted out- I suspect that wasn’t the originally planned ending. Either way, the feud will continue and we will no doubt get a match between the pair at the Rumble. (Match Rating: **1/2)

After some hype for next week’s 25th Anniversary Edition of Raw, we see Angle backstage on the phone trying to convince an unknown wrestler to make an appearance in the Women’s Royal Rumble. Sheamus and Cesaro interrupt and ask why they have yet to be given their rematch for the tag titles. Angle says they can have their match – at The Royal Rumble. Once The Bar have left, The Miz makes his way into the office demanding his rematch against Reigns. He wants his match next week on the 25th anniversary show. Angle doesn’t get a chance to respond before The Miz leaves. The match, however, is confirmed later in the night.

The Bar are out for a match against Titus O Neil and Apollo Crews next and we are given the night’s strangest booking decisions. After an average back and forth match, Titus steals the win by getting the roll-up on Sheamus after he misses a Brogue Kick. I have no issue with the company building other teams but this just felt super out of the blue. I guess once Jordan and Rollins inevitably implode, the Bar will need some competition within the division, and the company have realised that they have placing all their eggs in one basket for the last few months. (Match Rating: **) 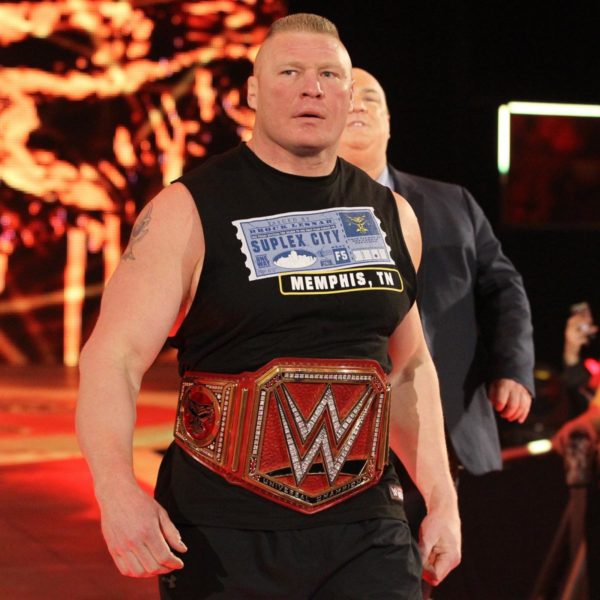 Paul Heyman and Brock are out next. Paul runs down Brock’s opponents and bigs up Brock while Brock does his usual jumping on the spot and smirking routine. Solid mic work from Heyman, as always and he finishes by saying that Brock is going to stack up both men for the pinfall at the Rumble. The two leave the ring and Brock is attacked by Kane on the stage, this continues into the back until Brauuuuuuuun arrives and just plows through both men. We then get the best moment of the night as Braun pulls down a giant metal framework onto the duo. Seeing Brauuuuuun do these ridiculous spots never gets old. While many are speculating, due to a leaked image (a fake, leaked image) last week that Braun may walk away victorious at the Rumble, I really don’t see it myself.

Samoa Joe is out next to squash Rhyno in a matter of minutes. (Match Rating: N/A) The match itself was just there to give Joe a victory after his loss last week and straight after the match, he announces himself as an entrant in this year’s Royal Rumble. This really just felt like filler here.

We see Alexa Bliss talking to Nia backstage, with Alexa whispering something that Asuka had supposedly said to her earlier in the night about Nia. Nia then asked Alexa if she speaks Japanese, which raised a wry smile.

Asuka is out next for a match against Jax. When she is stood on the buckle though, Nia ambushes her and leaves her lying in the ring. This was a nice way to keep Asuka away from Alexa for the time-being, and also to build someone up as a legitimate threat to Asuka. 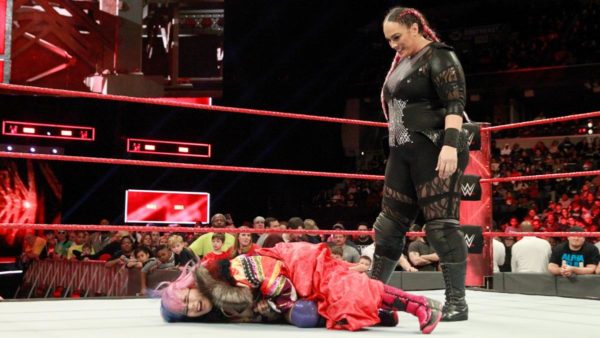 Finally, we hit the main event – The Balor Club Vs Roman Reigns, Jason Jordan and Seth Rollins. The six men put on a really entertaining match but throughout I couldn’t help but feel like I’d have rather waited for Ambrose to return to see these men in the ring together. Jordan continued to get in Reigns and Rollins’ way and ultimately cost them the match when Balor hit the coup de grace on Rollins. This was a nice way to continue building Jordan’s heel turn and inevitable match with Rollins, while it also made The Club look stronger than any member has done in months. (Match Rating:*** 1/4) After the match, The Miz attacked Reigns and The Miztourage hit Reigns with his own triple power-bomb. The show closed with The Miz stood tall and the crowd chanting ‘one more time’ in reference to the powerbomb. 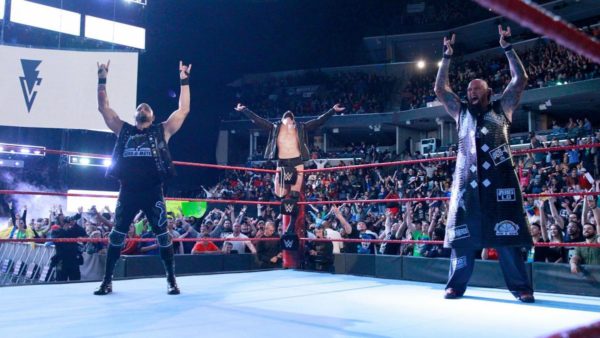 Verdict: This was an odd one because while I enjoyed most segments on an individual level, as a show, I really felt the 3 hour run-time of Raw this week. The wrestling wasn’t bad and most of the segments were fun but the whole show felt like it was biding time until the 25th Anniversary Show.

What did you think of Raw? Let us know in the comments below, and let Liam know on Twitter @liamhoofe