Stephanie McMahon is out to kick off tonight’s show. She talks about the history that was made at the Royal Rumble and mentions many of the match’s performers. She talks about Asuka and the first ever Women’s Royal Rumble winner makes her way to the ring. Stephanie says this is normally where she would ask Asuka which champion she would like to face at WrestleMania, but first she has to announce the first ever Women’s elimination chamber match. This gets a good reaction from the crowd.

Asuka cuts a promo in Japanese and finishes by saying that no-one is ready for Asuka. Sasha Banks’ music hits and the boss makes her way to the ring. Sasha congratulates Asuka but says that she has shown that is she ready for Asuka. Stephanie announces a match between the pair for later in the night. I enjoyed the opening segment here. Is Sasha slowly turning heel? I hope so, she’s got some real momentum coming out of the Rumble and it seems silly not to captialise on that. I’m more than happy to see Asuka feud with Sasha for the next few weeks. The Women’s Rumble has really lit a fire under the Women’s division and I hope they can keep that going.

The first men’s elimination chamber qualifier is up next: a last man standing match between Braun and Kane. The two men begin brawling straight away and Braun just dominates Kane. He beats him through the crowd before taking him up to the entrance and tipping the whole announce desk set on him. The ref stops the match and Braun stands on the stage and looks scary as anything. This made Braun look like an animal after the Rumble and it will likely be the last we see of Kane on TV for a few weeks. This is what Braun should have done to Kane months ago. After the match, Braun is interviewed and says he was simply doing his job – can’t argue with that. 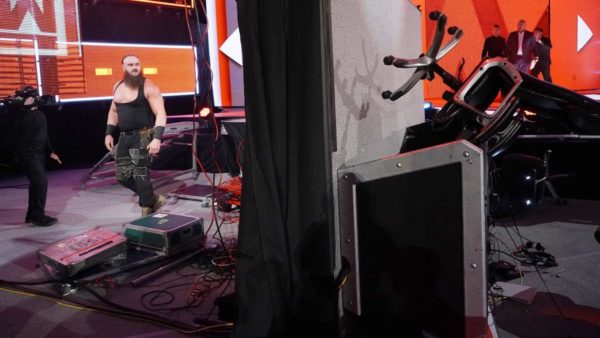 Elias is out in the ring for the next qualification match. Elias talks about how John Cena will get what he deserves for the events at the Rumble and that he is focused on getting to WrestleMania 34. He is interrupted by Matt Hardy. The match between the two is a fairly standard affair, with his Matt doing his usual ‘Woken’ shtick. Elias picks up the victory after Bray’s usual noise hits and he appears on the screen. (Match Rating: ** 1/4)  Great to see Elias get the victory here and he seems to be on a bit of a rise in the company. Matt Hardy is likely to turn from Woken to Broken in the coming weeks, with Bray seemingly having one up on him at every turn. I think we’re heading towards a final deletion match somewhere in the near future.

We see a brief Instagram video of The Miz hyping his match against Roman Reigns.

Reigns Vs The Miz for the Intercontinental Title is up next. It’s a fairly rinse and repeat affair from the two’s original match on Raw 25, with Reigns dominating a lot of the proceedings only for The Miztourage to use the numbers games to distract him. The Miz tries his spot from last week but is thwarted but then Dallas distracts Reigns enough to allow The Miz to get the roll-up win. (Match Rating: ***) The match was perfectly fine, nothing special and effectively a re-run of last week but The Miz is always great to watch and Reigns is certainly no slouch. The Miz is rumoured to be heading towards a big Mania match with Strowman and that is no less than he deserves.

The Revival are out for a quick squash match against Slater and Rhyno next. Nothing to write home about here, The Revival did what they had to do and this, combined with their victory over The Club at the Rumble, will hopefully be the beginning of a rise up the card a little bit for the duo following their humiliation at Raw 25.

Sasha Banks Vs Asuka is the night’s next match. Wow, did this deliver. Asuka and Sasha have a great chemistry in the ring and this was the best match we’ve seen on Raw so far in 2018. The crowd took a while to get into things but once this got going, it was great. One spot, where Sasha tried a dive out of the ring only for Asuka to kick her in the head looks absolutely brutal and Sasha’s constant submission attempts and the near falls really drew me into the bout. Asuka eventually picked up the win but Sasha comes out of this looking strong as well. Sasha needs to turn full heel after this and I’m more than happy to see these 2 reignite their feud post Mania. (Match Rating: ****) The women’s division is so damn good right now. 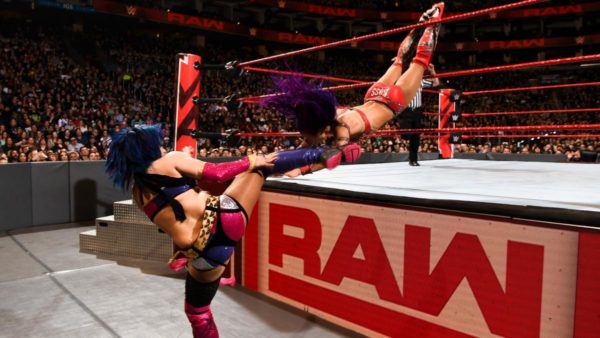 The Bar, fresh off their victory against Rollins and Jordan at the Rumble, are defending their titles against Titus Worldwide next. The two teams basically replicate their matches from the previous weeks, with Titus Worldwide trying to pick up the roll up victories as they did in the previous two encounters. This match went a little too long for my liking and The Bar picking up the win just made their previous two defeats seem kinda pointless. Jordan and Rollins are set to implode and The Bar will need some legitimate challengers soon, the company really need to bring AOP up to Raw. (Match Rating: **)  This just highlighted how little depth there is in the Raw tag team division.

The night’s final match is another Elimination Chamber qualifier between John Cena and Finn Balor. As you’d expect from the two, they delivered a solid main event. While the match didn’t quite reach the heights of say, Cena Vs Shinsuke from last year’s SmackDown, it was still a solid, typical Cena match-up. There were plenty of near falls and Cena had to bring out the big guns to beat Finn in the end. Though, seeing Cena hit the five knuckle shuffle without doing the little run made the move look even more ridiculous than it usually does. It’s a shame Cena went over here because I’m not really sure what the company can do with Balor over Mania season, and at least putting him in the EC match would have kept him in the spotlight somewhat. (Match Rating: *** 1/4) I’d like to see Finn either turn heel or move to SmackDown in the coming months, after The Club reunited and he did so well in the Rumble, I feel like he’s on the brink of breaking through again and I just hope they don’t mess this up. As for Cena, rumours seem to have gone quiet about The Undertaker match but we will see how that one develops. 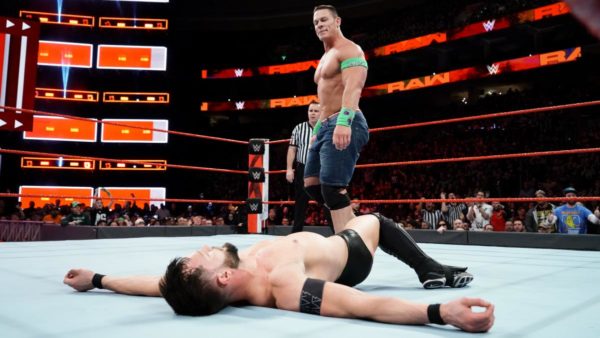 Verdict: This was a really great episode of Raw. The show did a nice job of building hype for the Elimination Chamber while also utilising the momentum gained from the Rumble well. Asuka Vs Sasha was an excellent TV match and I hope we see more of them in the near future, and the elimination chamber announcement was cool. This felt like an episode of Raw that was focused on the wrestling for once, and the show was all the better for it. If this is what the road to WrestleMania is going to look like, then consider me well and truly strapped in.