This week’s SmackDown kicked off with Royal Rumble winner, Shinsuke Nakamura in the middle of the ring. Nakamura was out to address his victory and his upcoming WrestleMania match with AJ Styles. Nakamura cut a promo where he named superstars in the rumble and talked about how he hit them with his knee, then he mentioned AJ Styles and said he was going to do the same to him at WrestleMania. He was then interrupted by Sami and Kevin, who, of course, were annoyed over the decision at the Royal Rumble.

They talk about how Shane McMahon screwed them, and how they should be champion. They tell Naks that he should be facing them at WrestleMania and he calls them losers. Just as they go to attack him, AJ Styles makes his way to the ring. He talks about how his match with Naks is a dream match, and he proposes a tag match between the four men later in the night. This wasn’t a bad opening segment, and it set up the main event for later in the night. Owens and Sami are likely to linger around the title scene until March, when the focus will fully shift to Shinsuke and AJ, in the same way that AJ did with Orton and Bray last year.

Sami and Kevin approach Bryan backstage and the GM confirms that the tag match will take place. He admits that the Rumble finish was screwy and that next week, Sami and Kevin will face each other in a number 1 contenders match for Fastlane. The most amusing thing about this segment for me was remembering that Fastlane was actually happening.

A new number 1 contender for Bobby Roode’s US title needs to be crowned, so Jinder Mahal Vs Kofi Kingston Vs Rusev Vs Zack Ryder is up next. The match was fairly plodding for a multi-man match, with there often just being two men in the ring at a time. Jinder is much better suited to this level on the card but his in-ring style is too methodical and slow to really get a crowd excited. It was nice to see Zack Ryder back in singles action and I hope he can at least be in and around the US title picture, even if he’s never competing for it. I also like the fact we have got to see members of the New Day competing in singles action a lot recently if the company has nothing for them as a team at the moment, it makes sense to keep them relevant in singles matches. The match was fairly average but it gets extra credit for giving Rusev the victory. Rusev is on fire right now and is one of the most over wrestlers in the WWE. I’d love to see him win the belt and have a prolonged feud with Roode but it would appear he is just buying time for Roode until Ziggler returns for the belt, sadly. (Match Rating: ** 1/2) 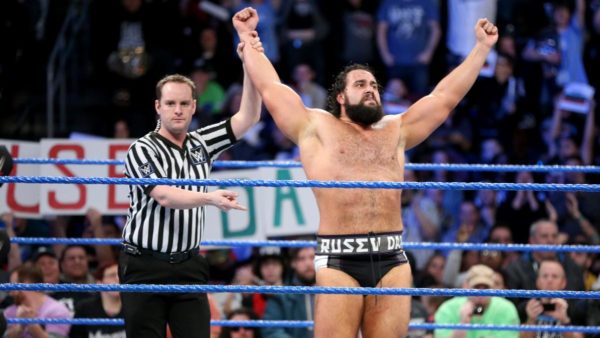 We see a little backstage skit with Breezango and the Ascension talking about Shelton Benjamin and Chad Gable, presumably to set up a match later in the night.

The Usos are out next to address their victory Sunday night. They brag about how they won 2-0 on Sunday night and how they are the best team in the WWE, listing other teams that they have beaten and talking about how no-one can stop them right now. The Bludgeon Brothers music then hits and the two leave the ring. This was a great promo from The Usos, who can seemingly do no wrong (at least in the ring) right now. A feud with The Bludgeon Brothers makes a lot of sense and Harper and Rowan should be able to drag some amazing matches out of the champions – it’s easy to forget how talented they are when you see their current gimmick.

The Bludgeons take a slow walk to the ring as The Usos leave looking nervous. The former Wyatt Family members then squash a pair of enhancement talent in a matter of minutes. Fair enough.

We see a video from Daniel Bryan’s twitter where he announced a new ranking system that would help him and Shane make decisions on SmackDown. Sounds like it could be quite a cool concept, let’s see how the WWE mess it up.

We see Shane backstage. Tye Dillinger comes into the office and says that he was robbed of his chance at the Rumble. Shane agrees when Baron Corbin walks in and says he didn’t get a fair shot either. Corbin and Tye begin to argue so Shane makes a match between the two for later in the show.

Charlotte is out to talk next. She talks about she almost wished she wasn’t champion so she could have had the chance to compete in the first-ever women’s rumble. She talks about how even though she wasn’t part of the rumble, she was part of a moment that broke the internet. She is interrupted by the Riott Squad. Ruby Riott instantly mocks the phrase ‘broke the internet’ and rightfully so, it sounded terrible. The Riott Squad head to the ring and Ruby mocks Flair for her ego and makes a few digs about her father. Ruby attacks Charlotte and despite the champion trying to fight back, the Riott Squad beat her down. 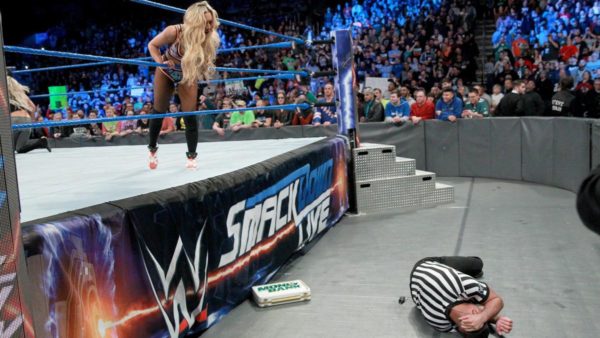 As The Riott Squad are leaving up the ramp, Carmella’s music hits and she runs down with a referee to cash in her briefcase on a laid out Charlotte. Carmella checks to see if Charlotte is out, then gives the briefcase to the ref. He takes too long to ring the bell and Charlotte begins to get up, Carmella runs to hit Charlotte but hits the ref. She screams and eventually gets out of the ring and collects her briefcase before scampering up the ramp. It was nice to see the WWE tease a cash in, as Carmella has seemingly not been all that interested in actually cashing in before. A potential cash in is always a nice surprise, and it’s good to have that threat lingering as approach WrestleMania. I imagine we will see Charlotte face Ruby at Fastlane, just to keep her occupied until Asuka jumps ship and faces her next month.

There’s an amusing little backstage skit between AJ and Shinsuke, where Shinsuke just keeps saying he is going to beat AJ at WrestleMania as AJ tries to talk strategies for the main event. More of these, please.

Tye Dillinger and Baron Corbin is up next. Both of these men are just sort of floating around in no man’s land at the moment and this match really highlighted that. The whole thing had no tension whatsoever and the crowd really weren’t that interested. Corbin picked up the victory but it doesn’t really felt like it mattered. (Match Rating:* 1/2) The commentators bigged Corbin up a lot after this victory and I think he may just get chucked into a feud with Randy Orton during WrestleMania season, as no man has any clear feud set up right now.

Shelton Benjamin and Chad Gable are against Breezango next. This match served very little purpose except to give Gable and Benjamin a victory after their defeat at the Rumble. The problem, though, is that their defeat was so emphatic that they are no longer in the conversation as legitimate challengers to the belts. The match was fine, but nothing remotely memorable. (Match Rating: ** 1/4) 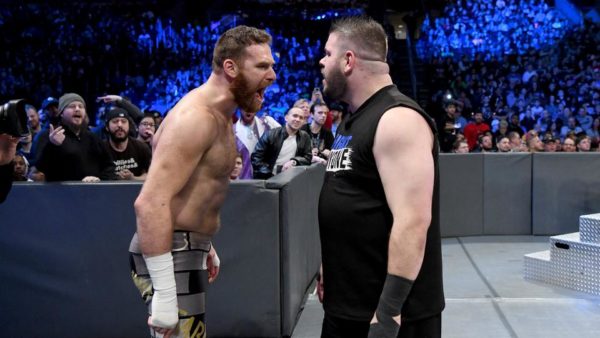 The main event is next – AJ Styles and Shinsuke Nakamura against Kevin Owens and Sami Zayn. The match, while not bad, spent far too long focusing on the growing rift between Sami and Kevin, with Sami leaving the ring and leaving Kevin to fight on his own. The in-ring action wasn’t bad but this felt like a classic case of ‘sports entertainment’ being prioritised over wrestling. This could have been a great match considering the talent involved, in the end, AJ And Shinsuke just felt like they were there for the sake of it. (Match Rating: ** 1/2)  The biggest takeaway from this, for me, is that Daniel Bryan is not returning to the ring. The focus this week had clearly shifted from Shane Vs Kami to an internal struggle in the group and that could mean that plans have changed. If D-Bry is still not cleared, chances are the company could just opt to go down the lazy route and not round that storyline off, instead just giving us a bout between Sami and Kevin at WrestleMania. What a waste of time, if so.

Verdict: This week’s SmackDown wasn’t bad, just largely average. After last night’s excellent edition of Raw, this felt a little slow at times, the wrestling was largely forgettable but the teased cash in was a nice surprise. The rift between Owens and Zayn shows that the company is clearly trying to shift away from Shane O Mac and Daniel Bryan a little bit. Next week’s show has plenty of exciting prospects though, so let’s hope they can kickstart the car next week and get on the road to WrestleMania with a bit more gusto. 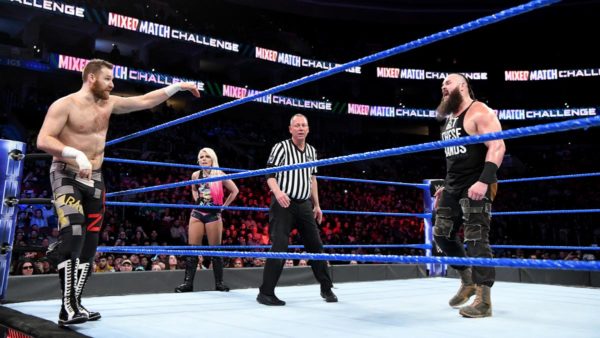 Before the match, we saw a video of Braun training Alexa, which involved him trying to get her to pick up a car and her wearing a ‘These Hands’ t-shirt that was far too big for her. This was a nice little reminder of why this show is so much fun – it gives the superstars a chance to explore their characters and have a laugh outside of the weekly storylines, and this week’s show was just as much fun as the previous two.

The in-ring action was largely focused on Becky and Alexa, with Sami comically running away from Braun any time the two men had to share a ring. The finish saw Alexa hit a Twisted Bliss off Braun’s shoulders, which was pretty awesome.

After the match, the two cut a promo where Braun said he thought Alexa was cute. The crowd popped big time for this and then got even louder as she admitted she thought he was cute too.

I loved this edition of Mixed Match Challenge. The match was really good fun and Braun and Alexa are gold together. They said at the end of the match that they would go all the way (an innuendo lapped up by the crowd) in this tournament and after this week’s show, I’d be more than happy to watch that.