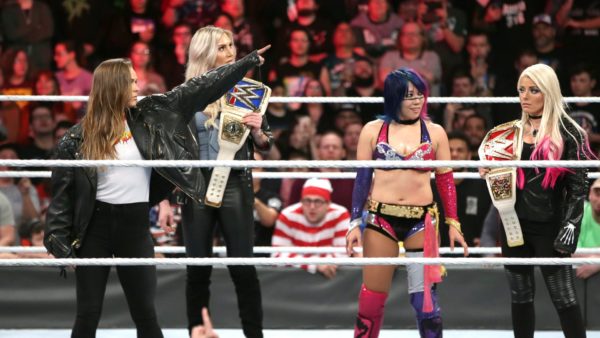 Since making her WWE debut at the Royal Rumble, Ronda Rousey has not been seen near a WWE ring. The reason for this is because she has been shooting a movie in Columbia, and on this week’s edition of Monday Night Raw, the WWE confirmed that Rousey would be making her next appearance for the company in a contract signing segment at the Elimination Chamber pay-per-view.

Rousey is rumoured to be teaming with a partner to take on Triple H and Stephanie McMahon at Wrestlemania, so expect the company to sew the seeds for that bout at the event.

Major Change to the Elimination Chamber

#RAW GM @RealKurtAngle has decided that BOTH @WWERollins and @FinnBalor will enter the Men’s Elimination Chamber match! #WWEChamber https://t.co/7UIg1CYUo8

Following the finish to last night’s Raw, which saw Finn Balor and Seth Rollins both pin Bray Wyatt for the final spot in the Elimination Chamber, the WWE has announced that both men will enter the chamber and this year’s match will, for the first time ever, feature seven performers.

The announcement is an interesting decision from the WWE and I’m also going to speculate that perhaps, with there being an empty pod in the women’s match, Nia will find her way into the match and set up her match with Bliss for Wrestlemania as well.

Latest Member of the Hall of Fame Announced

BREAKING: As first reported by @espnW, Ivory will be inducted into the #WWEHOF Class of 2018! https://t.co/i3PrrKfoCM

After being reported by ESPN, the WWE confirmed on last night’s Raw that Ivory, the former Women’s Champion, will be inducted into this year’s Hall of Fame.

Ivory will join Goldberg and The Dudley Boyz in this year’s class, with Mark Henry, Bam Bam Bigelow and Molly Holly still being heavily rumoured for the class of 2018.