John Cena is out to open the show. Cena talks about how he doesn’t have a clear path to WrestleMania this year, and that he has to win the elimination chamber so he can defeat Brock Lesnar and become the Universal Champion. He also alluded to the Undertaker during this promo, which got a nice little pop from the crowd. Cena is then interrupted by The Miz. 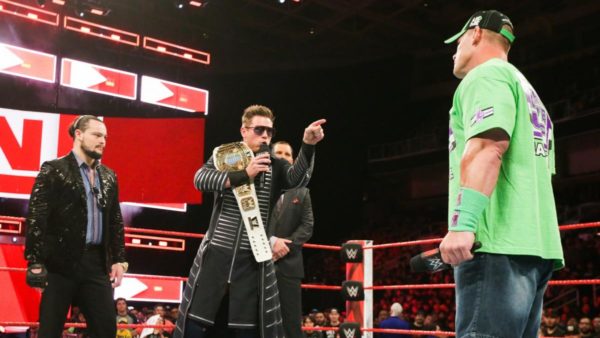 Cena laughs at the idea of The Miz facing Brock Lesnar at WrestleMania and The Miz runs down Cena in return. Cena proposes a match between the two of them, with the loser being forced to enter the chamber first. The Miz laughs at the idea and The Miztourage attack Cena. With Cena laid out, The Miz accepts the challenge. Kurt Angle then comes down and says the match will start right away, but Dallas and Axel are banned from ringside.

So we have the night’s first match. Cena starts the match on his back, which should tell you something about the narrative of this encounter. The Miz dominated the majority of the match until Cena started to rally back, the two exchanged finishers and the crowd really got into it. Both men kicked out of the other’s finisher until Cena hit the AA off the top rope to pick up the victory. (Match Grade: B-) This was a really fun way to open the night. The match did what it had to do, and it got the crowd excited for the rest of the night. The Miz entering at Number 1 should prove interesting as well.

We see a Woken Matt promo about tonight’s second chance match for the Elimination Chamber.

Next, we see Gallows and Anderson cutting a promo showing us that The Revival are nerds.

The two teams are out for the night’s next match. I’ve enjoyed this mini-feud and it’s been a good way to keep both teams on television. The Revival picked up the victory in what is likely to be the last match in this feud, but I expect both teams to be hovering around the tag titles as we get closer to WrestleMania. (Grade: C) Not a great deal to say about the match itself, it was a fun little tag match, basically.

Kurt Angle is out next. He announces that Ronda Rousey will sign her Raw contract at Elimination Chamber. He follows this up by announcing that Jason Jordan has had to undergo neck surgery and that he will miss WrestleMania. He criticises anybody who thinks that this is good news and he is then interrupted by Seth Rollins. Rollins talks about how he has no opponent for WrestleMania. Kurt suggests finding another tag partner, but Rollins says he wants a shot at the Universal Title. Angle says the match is already set for later tonight, and Rollins suggests that Kurt makes it a fatal 5 way. Kurt agrees, and the two men shake hands to close the promo. This was a really solid promo with Kurt Angle doing some great work, and Rollins reminding us that he should be a main event player in the WWE. I suspect we may see Angle Vs Rollins at WrestleMania this year.

Bayley Vs Sasha Banks is up next. Wow, giving away this match for free on Raw, the company is clearly pushing the women’s division hard at the moment and once again, these two women stole the show with the best match on the card last night. I’m really enjoying Sasha’s slow-burn heel turn, and it’s great to see Bayley getting some focus again. These two have both put on a great match against Asuka in recent weeks, and they did the same against each other last night. Bayley picked up the victory with a Bailey to Belly off the top rope. (Match Grade: B+) After the match, Nia Jax attacked both women from behind and then said that she destroyed them in a matter of minutes, while it took Asuka a lot longer than that. I really enjoyed all of this, and the women’s division is on fire right now. 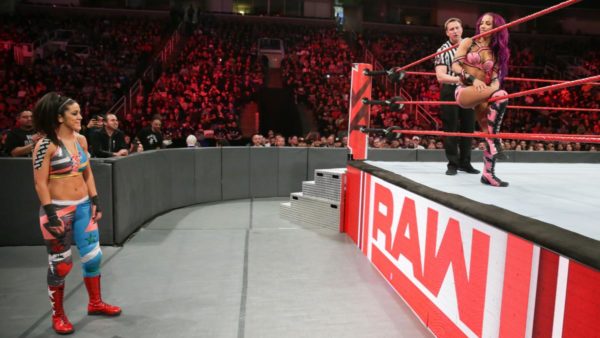 We see some a backstage segment between The Bar and Rollins and Reigns. This sets up a match for later in the night between Reigns and Sheamus.

Up next is Absolution Vs Mickie James and Alexa Bliss. I like that they’re giving Alexa a little storyline as we build towards Elimination Chamber, and also that Absolution are being booked to long strong. Alexa trying to manipulate Mickey into helping her at the Chamber is a great idea, and it’s a clever way of making everyone in the match itself feel relevant. This match was a standard tag team bout, nothing particularly interesting. Absolution picked up the win (Grade: C) and the team try to attack Mickie James after the match, only for Alexa to make the save.

Elias is out next. Once again, Elias works the crowd like a pro here and he is quickly becoming one of the most over superstars in the WWE. His mic work is spot on, and if the company can handle him correctly over the coming months, he could be a serious player on Monday Nights. He is interrupted by Braun, who, hilariously, is sat at the top of the stage with a giant string bass. Braun signs a song about Elias getting these hands, and the crowd are eating it up. 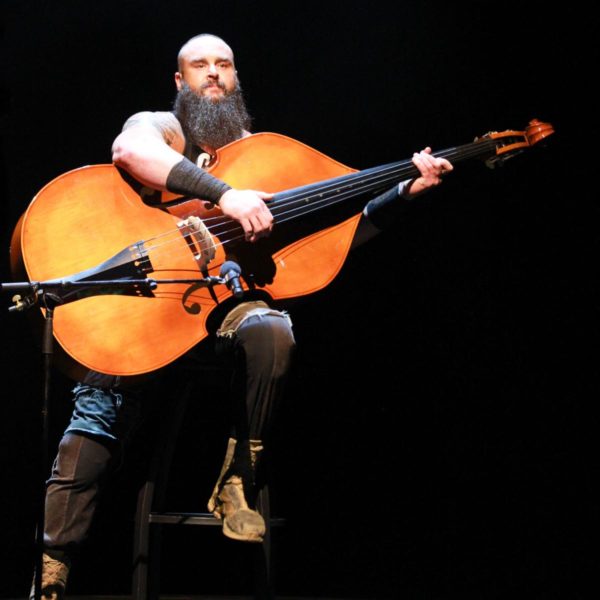 Braun then walks to the ring with his bass, and Elias picks up his guitar. In the end, Braun leaves the bass outside the ring, comes inside, destroys Elias, and then smashes the bass over Elias as he tries to escape on the ramp. This segment was brilliant and both men are super over right now. Braun managed to both look like a beast and also provide plenty of comic relief, while Elias played his part expertly. I’d love to see a feud between these two.

Sheamus Vs Roman is up next. Roman gets his usual reaction here but the crowd didn’t seem all that invested in this match, which is a shame because it was a good bout. The two men have a history in the ring together and this match was better than a lot of what we saw from their previous encounters. Roman is consistent in the ring and he displayed that once again last night. He picked up the win, which gives him plenty of momentum heading into his inevitable chamber victory. (Grade: C+)

Main event time, and what an odd array of wrestlers to have in the main event of Raw. This was a really fun multi-man match and everyone got time to show their talents. Even Apollo Crews looked quite good here. As multi-man main events go, this was a solid bout. The finish, which saw both Finn Balor and Seth Rollins pin Bray Wyatt (poor Bray, pinned by two men on the same show) looked to have set up a match between the two on next week’s Raw, but it has since been announced that we will have the first ever 7 man elimination chamber instead. Exciting times! (Grade: B) 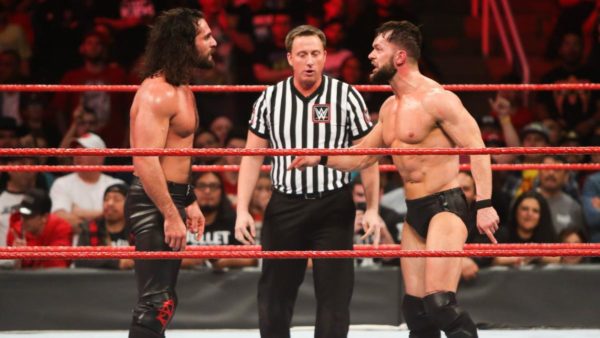 Verdict: Raw makes it three for three on the road to WrestleMania. Once again, this week’s show focused on the action in the ring and the show was all the better for it. In comparison to SmackDown right now, Raw is flying high.