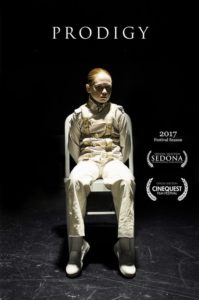 A psychologist engages a dangerous, young genius in a battle of wits — unaware of the supernatural power the girl possesses, or that her life hangs in the balance. 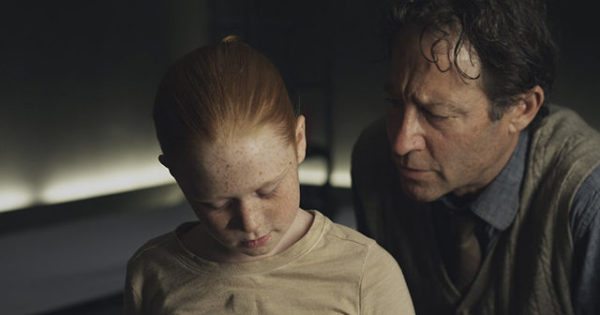 It only takes a few minutes into Prodigy (written and directed by collaborators Alex Haughey and Brian Vidal) to notice that something is off about the presentation as a whole. Sonically, it’s a film from roughly the black-and-white era of cinema complete with antiquated sound cues, crackling noise overheard with headphones on that drowns out some of the low pitched dialogue, but it’s in color and looks like a film that you would expect to be released in the year 2018. As I do with most movies, before settling down to write down some coherent thoughts I decided to do a little research on what was personally bugging me and came across a review based on a festival circuit version of the film from 2017 that specifically mentions watching the film in black and white. There you have it; the source of my confusion is solved, but answers lead to more questions as now I wonder why it was changed at all. Was the vision altered by audience feedback, independent distributor requests, or a creative decision? Would I have enjoyed Prodigy more if it was in black and white?

Now, I’m fully aware that I could go to the source of the screener and request to watch the black and white version for comparison’s sake, but movies never stop releasing meaning that time is limited, and I have to go on what was given to me for review purposes. However, I will go out on a limb and trust my own judgment based on personal preferences and say that, considering Prodigy is not a special-effects-heavy film at all (it’s a chess game, literally and figuratively, between a psychologist and a young girl possessing superhuman strength, intelligence, and telekinesis powers) and was originally designed to be an old-timey throwback experience strengthened by its battle of wits and psychology, that yes, it would work better in black and white.

However, the key word there is “better”, as no matter what Prodigy is a flawed movie containing everything from poor acting to some of the most worthless and superfluous side characters to be spotted in a movie in quite some time. Honestly, only four characters are really needed (the psychologist, the phenomenal child, the generic military badass that wants to drill into the girl’s brain in order to harness research materials, and the government agent with a heart of gold, who also has a previous connection to the psychologist, that both want to prove that the girl is not a full-blown sociopath in order to preserve her life). Additionally, we have other analysts and a tech guru intended for comic relief whining about potentially missing a date (I’m not sure an 80-minute movie meant to be emotional needs consistently over-the-top humor at the most annoying times). 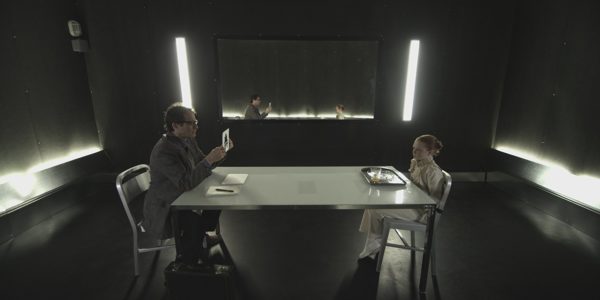 Thankfully, whenever Dr. Fonda (notable character actor Richard Neil) enters the small rectangular room housing the restrained Ellie (Savannah Liles, who all things considered turns in a fine introductory performance) to worm his way inside her head and find out the source of what has troubled her into using her mysterious powers violently, the interactions are moderately attention-grabbing. Fonda does not read his patient notes at all before conducting an interrogation (he backs this up by wanting to hear the patient’s side of the story without any outside interference clouding his judgment, which I’m sure would not fly at all in the real world, but admittedly does allow us to learn in tandem with Fonda), so he’s doubtful what Ellie is capable of until he disobeys orders and removes the straitjacket so she can physically play chess alongside him (an exercise that will apparently drop her guard).

Still, Prodigy doesn’t answer many questions, and even when it does the script is drip feeding everything to the audience in a confusing way that paves invokes new questions. Not everything needs to be wrapped up clearly and concisely, but putting it nicely, Prodigy is a frustrating watch. Thanks to uninteresting and caricatures of characters, it doesn’t get any more involving. Even Ellie is the rendition of an all intelligent brainchild that you have seen multiple times before. The ending is also one hell of a dramatic shift in personality that isn’t remotely believable.

At the very least, I do applaud Prodigy for having the gusto to not go down the route of murderous slasher fare; it sticks to drama throughout which is for the best. It’s a rare movie where a character has super abilities, yet they don’t come into play in any meaningful way as it’s about determining if the child can function in society. Cut down on some characters, rework the script to be more stimulating and thought-provoking, and either commit to the black-and-white presentation or not, and then the filmmakers might be onto something with Prodigy. As of right now, it’s largely forgettable but Savannah Liles is a young child actress to keep an eye on.