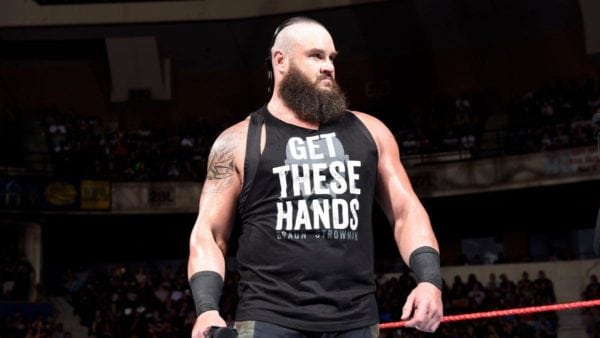 Braun Strowman is out to kick things off. Braun talks about how he is going to use these hands to win the briefcase and then defeat Brock Lesnar and the crowd are loving him. He is interrupted by Finn Balor, who also gets a reasonable pop. Finn talks about how he has not been given a rematch for his Universal title, and that while Braun may have beaten him last week, things will be different at Money in the Bank. Braun says Finn put up a good fight last week, for a little man. Finn slaps him and the two men begin brawling. Braun throws Balor out of the ring, and Angle comes down and announces a match between the two to kick things off. This was a perfectly fine opening segment. I’ve enjoyed these two men sharing a ring over the last few weeks.

Before the match gets underway, Kevin Owens makes his way to the ring and sits on the commentary desk, which is always a treat. The two men have a very similar outing to last week, with the match playing off the size difference between the two men. Kevin Owens is superb throughout the match, occasionally standing up and goading each man into destroying the other. Finn rallies and looks to finish Braun off with the coup-de-grace until Owens runs down and attacks him. (Rating: ***) Owens then attacks Balor with a ladder and tries to do the same to Braun. Of course, Braun stops in and Owens runs out of the ring as Braun throws the ladder at him. This was a fun opening match, and it’s nice to see Kevin doing something that isn’t with Sami Zayn for a change. It’s been a nice reminder of just how awesome he can be.

Not so fast, @FightOwensFight…@RealKurtAngle just put The #Prizefighter in a match against @REALBobbyRoode TONIGHT on #RAW! pic.twitter.com/Ul7c2zDoYD

Owens is then seen backstage with his suitcase ready to leave. He is stopped by Kurt Angle, who tells him that he can’t go anywhere because he has a match with Bobby Roode later in the night. Owens walks off in a huff as Angle smirks.

Back to the ring, and Elias is out for a performance. It’s the typical Elias segment, which is not a bad thing. He works the crowd like a pro, and just as he is about to sing, he is interrupted by Seth Rollins, who is out for his pre-announced match with Jinder Mahal. 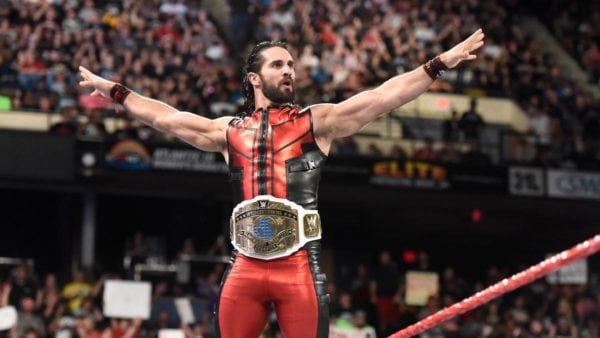 Is there anything Seth Rollins can’t do at the moment? The Intercontinental Champion is on fire right now, and he even managed to get a really enjoyable match out of Jinder Mahal here. The two men had a great back and forth bout going on, and the interferences from Sunil Singh even managed to play quite nicely into the bout. Both men have well-protected finishers, which kept the match really exciting and I genuinely thought for a while that the company might go nuclear and give the belt to Mahal. After a chair shot from Mahal when the ref’s back was turned, Rollins took justice into his own hands and hit Mahal with the chair, leading to a DQ. (Rating: *** 1/4) After the match, Rollins beat down Mahal and Singh with a chair, and stood on top of the commentators’ table. He was then hit from behind by Elias with his guitar. This led to a stretcher being brought out for Rollins but, of course, he decided that he would walk. I really enjoyed this match, and the finish sets up two potential feuds for Rollins in the coming months.

Next up, Ronda Rousey and Nia Jax are out. Rousey sits on commentary as Nia puts on an ‘exhibition’ for her. We see a jobber try to lack an armbar on to Nia, and she simply lifts her up and throws her off. She then taunts Rousey before hitting the Samoan drop. Rousey makes her way to the ring and Jax runs her down, saying she isn’t scary, she is cute. This all felt fairly pointless. Nia is playing the heel here, which makes sense, but the feud has no real heat at all. 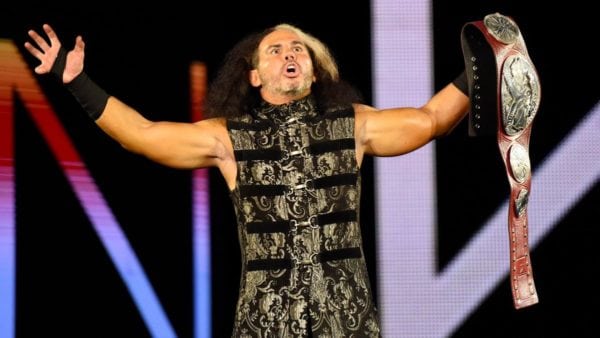 The tag team champions are out for a match with The Ascension. The WWE has seemingly stopped taking the tag team division seriously, and this match was fairly poor. They have done absolutely nothing with Bray and Matt since they won the belts, and the division is looking weaker than ever, especially with The Authors of Pain constantly being left off television. (Rating: * 1/2)

Are we about to have a #MemorialDay BBQ on #RAW?!

Fear not, though, because we still have the B-Team, who we see talking backstage with Angle. They say that they deserve a title shot, but Kurt mocks them and says you have to win more than two matches to win a tag team title shot which, frankly, is news to me.

Kevin Owens Vs Bobby Roode is up next. The two men have a solid, but not particularly memorable match, which Owens wins with a roll-up. Glad to see both of these men involved in the MITB match, but I wish the WWE would change Roode’s gimmick up because his character is going nowhere. (Rating: ** 1/2) After the match, Braun hits the ring and destroys Owens as Roode cheers him on. Of course, he then proceeds to destroy Bobby Roode as well. 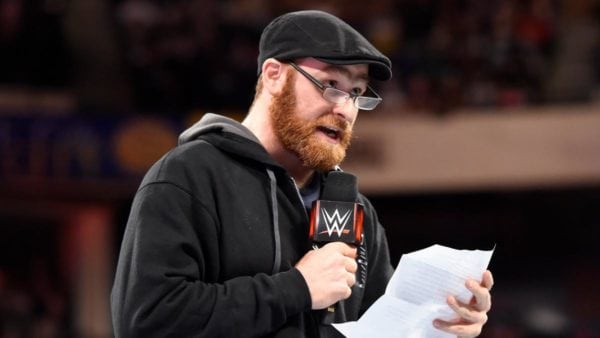 Sami Zayn is out to apologise for his segment last week next. Honestly, this was pretty bad. Zayn is fun as a heel but this feud has been terrible, and the only good thing about all of this was Zayn’s glasses. He apologies for his actions last week and then proceeds to justify them before Lashley comes in and crushes his hand. This feud is not doing either man any favours, and Zayn feels directionless now that Owens isn’t with him as much. Lashley’s return has been a dud so far and this match is easily the least interesting thing at Money in the Bank.

After being attacked by Drew McIntyre last week, Chad Gable is out for revenge on tonight’s show. This match existed to make Drew look good and there are few talents on the roster as good at making their opponent look great as Chad Gable. Gable sold like a pro here and Drew is every bit the impressive athlete that he has always been. Drew picked up the win with his Claymore Kick and I just hope the company can repay Gable for all of his hard work in the near future. (Rating: ** 1/2) 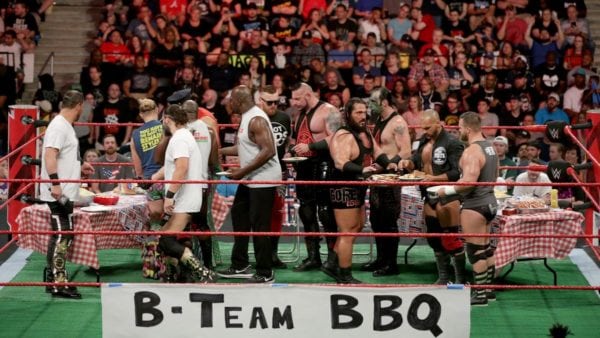 B Team BBQ time! Well, this was a daft segment. All of the jobber tag team assembled in the ring for a BBQ being hosted by Axel and Dallas. This was actually fairly fun for a couple of minutes but the novelty wore off the moment I realised that this is the current state of the Raw tag team division. There were a few laughs to be had here but on the whole, this was pretty rubbish. The tag team division on Raw has gotten worse and worse over 2018. What makes it more annoying is that The Authors of Pain are sat around twiddling their thumbs and that The Revival are doing segments with King Maxel on house shows. Sort it out, WWE.

After the segment, The B team are backstage with Angle, who announces a tag team battle royal next week, with the winners earning themselves a title shot. Bray Wyatt and Matt Hardy Vs Bo Dallas and Curtis Axel at Money in the Bank it is then! 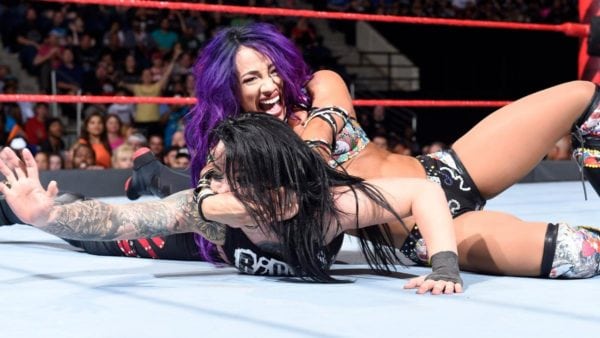 Finally, we’re on to the main event, which is a gauntlet match for the final spot in the women’s Money in the Bank match. A quick glance at the clock though shows that the company don’t have any big plans for this match, with the women being given less than half an hour to put on a show. Bayley started off against Liv Morgan, who she hits with one Bayley to Belly suplex and pins. That was quick. (Rating: 1/2 *) As Morgan leaves, her Riott Squad partner, Liv Morgan hits the ring and despite having a slightly longer match with Bayley, is pinned fairly quickly too. (Rating: *1/2) The final member of The Riott Squad, Ruby Riott is out but we didn’t even get to see the majority of this match, as it took place during the break. Riott picks up the victory with a Riott kick but we really didn’t get to see a great deal of this. (Rating: * 1/2)

Dana Brooke is out next and once again, the match is rushed and Riott picks up the victory. (Rating: *1/2) Mickie James then makes her way to the ring, and the match isn’t even 10 minutes long at this point. Riott and James have the best back and forth of the match here, with James looking impressive. Riott continues her streak and defeats James to progress to the final (Rating: **) Sasha is out and we have the match’s final 2. Riott and Banks had the best match of the gauntlet, but really, it should have been Sasha who had survived the match to get to the final, not Riott, who is a heel. Sasha overcome Riott here to pick up the win. (Rating: ** 1/4) but really, it should have been Sasha overcoming Riott, as opposed to a worn down heel being beaten by a fresh face. This match was a poor main event, especially considering the blockbuster gauntlet match we saw on Raw before the Elimination Chamber. The whole thing was booked fairly terribly, and it was given nowhere near enough time.

Verdict: Once again, this week’s Raw was an inconsistent mess. The usual suspects, Seth Rollins, Finn Balor, and Braun Strowman all impressed but the rest was poor. The build to Money in the Bank has been quite woeful on Raw, and the company continues to book both the tag division and the women’s division fairly poorly.