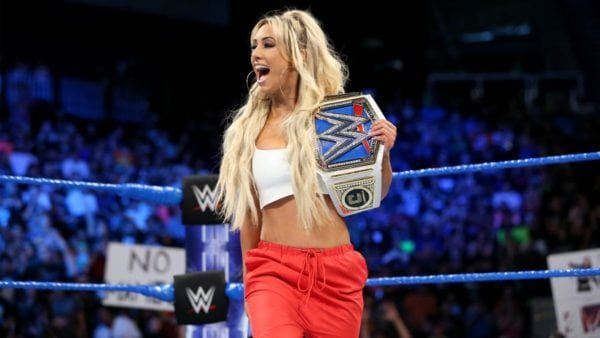 Carmella is out to kick off this week’s show. She cuts a promo running down Asuka’s legacy. She shows a video of the ‘old’ Asuka, and it’s basically a cut of her unbeaten streak. She then plays footage of her tapping out at Mania, and then shows her getting beat down various times since then. Carmella says that Asuka just hasn’t been herself since Mania, and it’s been painful to watch. Asuka makes her way to the ring to a pop. Before she can do anything though, Mandy Rose and Sonya Deville make their entrance. They say that Asuka is beatable tonight, and Carmella taunts Asuka. She says that the old Asuka would have beaten them both. Paige comes down and Asuka says she wants to face both of them, and we have our opening match. This was a fun opening segment. Carmella is excellent as the irritating champion and Asuka always plays her part well. It’s a shame that Deville and Rose are just getting fed to everyone each week though, they have lost any modicum of momentum they had since the shake-up. 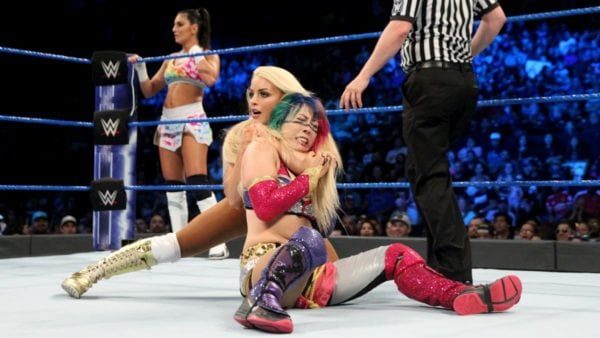 Asuka Vs Mandy Rose and Sonya Deville is kicking the night off. This was a solid opening match, and it made Asuka look strong heading into Money in the Bank. The numbers game worked for a while but Asuka took control eventually. Deville looked very good here, and her exchange with Asuka at the end was easily the best portion of the match. Of course, Asuka picked up the win in the end with the Asuka lock. (Match Rating: ** 3/4) After the match, Carmella attacked Asuka from behind and left her lying in the ring.

The Miz is backstage touching up on his reflexes when The New Day come up to him. They say that last week is water under the bridge, and they want to let The Miz decide who will be entering Money in the Bank by pulling a name out of the hat. The Miz pulls his blindfold down and the hat is full of pancake mix. Badum-tish.

Anderson Vs Harper is up next. The Good Brothers, Gallows and Anderson are basically just cannon fodder for The Bludgeon Brothers until the WWE decides who they want as their main competitors, but this match wasn’t too bad. It was kept short and sweet, and Anderson picked up the victory for his team with a cheeky roll-up. This just existed to give Gallows and Anderson a little bit of momentum before the Bludgeons do some bludgeoning at Money in the Bank. (Rating: ** 1/4) 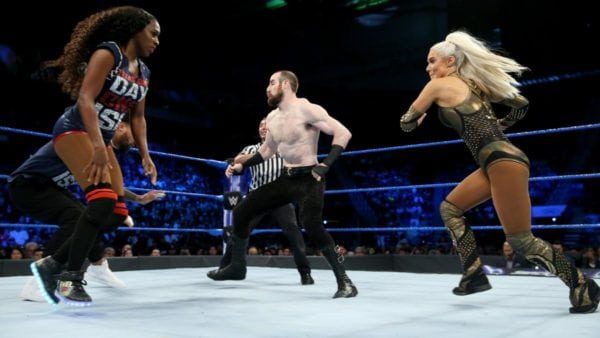 Mixed tag team action time now, and Lana and Aiden English are out for a match with Jimmy Uso and Naomi. This was a fairly fun match, and while the in-ring action was nothing special, things were kept short and there were some amusing spots. Lana still can’t wrestle for toffee, but everyone else was fine. (Rating: ** 1/2)  The Usos Vs Rusev Day is a fun feud for the time being, and keeps some of the brand’s most popular acts popular. 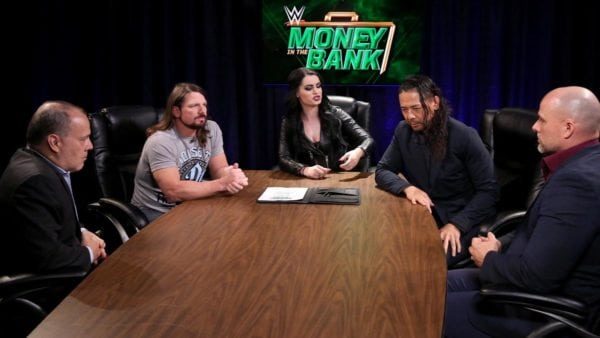 We get a novel approach to the contract signing between Shinsuke Nakamura and AJ Styles this week, as we cut to the two men sat in an office with Paige. The two men are sat opposite each other. AJ runs Shinsuke down, saying that he knows he can’t beat him, and that’s why he has to keep cheating. Shinsuke yawns and mocks AJ. AJ signs the contract, then Shisnuke claims that his pen doesn’t have any ink. Paige gives him another one, and he claims it’s broken. AJ loses it and slaps him before being dragged out. This was a great segment, and Shinsuke is super entertaining in his new heel persona. 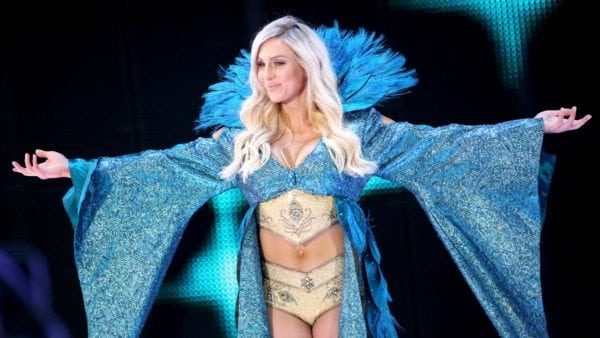 Becky Lynch Vs Charlotte Flair is next. These two women know each other incredibly well and its shows in what was an efficient, and enjoyable encounter. There were nice sequences throughout the bout, and Becky picked up the win with the dis-arm-her. Seeing Charlotte tap was a little bit of surprise but Becky getting the win makes sense. She has had zero momentum in the last few months, and she needs to be seen as legitimate going into Money in the Bank. (Rating: *** 1/4) I’d love to see these two women get an extended feud in the future.

“What you see is what you get, and very, very soon everybody gets…” A stern warning from @SamoaJoe to all the Men’s #MITB #LadderMatch competitors! #SDLive pic.twitter.com/hxufFRplTx

Samoa Joe is being interviewed backstage. Joe takes control of the segment and talks about he proved himself last week when he defeated Bryan. He puts the rest of the SmackDown locker route on alert and says he will win the briefcase and become champion. Usual high standard from Joe here. 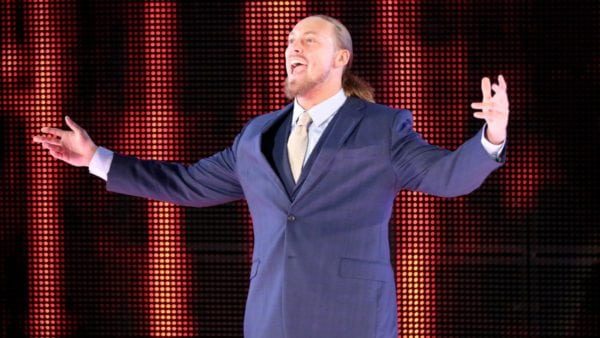 Next up, Big Cass is at ringside being interviewed. Cass is not the worst on the mic, but he gets given some terrible lines. He talks about Bryan being beaten last week, and how Bryan hasn’t faced anyone like Cass, despite beating him 4 weeks ago, and facing him on last week’s SmackDown. Cass’ delivery comes across like an imitation of Edge’s, which isn’t a bad thing but he really doesn’t stand out as a top star on SmackDown.

Sin Cara is backstage being interviewed about Andrade ‘Cien’ Almas. Cara talks about their past together and how they have been friends for years. Vega interrupts and runs Cara down, she says that she helped Almas become a man, and that Cara just made a mockery of him. The segment closes with Almas attacking Cara from behind. The two men will meet in the ring next week. 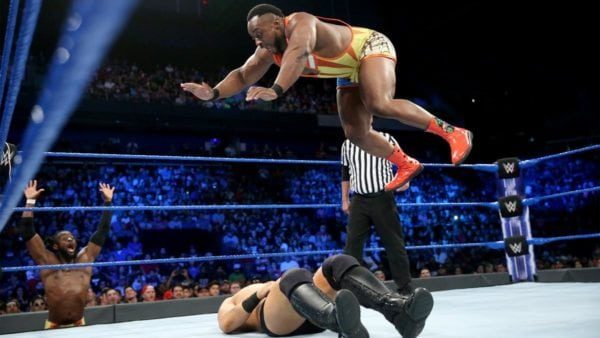 New Day Vs The Miz, Rusev and Samoa Joe is the night’s main event. Like last week’s six-man tag match, this was a really fun bout, that started off conventionally but broke down into chaos after a hot tag. The action came thick and fast, and the heels actually managed to work as a cohesive unit for the most part. The crowd were hot throughout as well, which really helped. There were some great spots here, and Joe, Rusev and Big E in particular, all looked strong. The ending came when The Miz accidentally threw pancakes at his team-mates and they laid him out and left him in the ring. Big E hit his finisher to pick up the win. (Rating: *** 1/2) This was a really fun way to close the show, and The New Day have been on fire in recent weeks.

Verdict: Once again, SmackDown delivered an entertaining show this week. There was a lot of fun to be had on the show, with the contract signing standing out, and two last matches being particularly strong. Raw, take note.