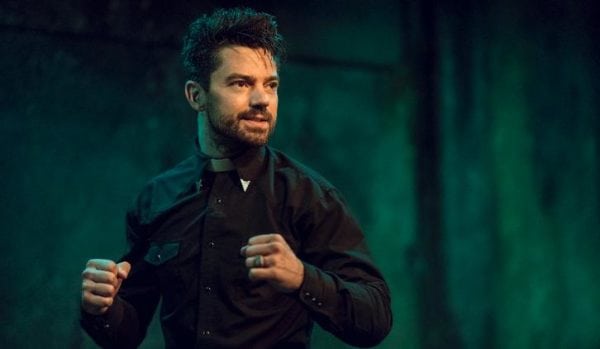 Great television shows like classic albums stand the test of time and leave their mark. Musically these are the records you rarely own, covet intermittently and promise to purchase next. Some of these so called classics gain cult status over time, hook into a trend and fad or fall into another category altogether. Often revaluated after the passing of a pivotal actor, writer or director these garner plaudits and a place in the Smithsonian through a combination of nostalgia and perceived reverence. Preacher will fall into the former category.

As things are wrapped up it is safe to say that this road trip of abstract theological insanity, with a side of order of philosophical food for thought has earned its stripes. In no other programme would SS guards tackle biblical manifestations of vengeance, while long dead dictators engage in fisticuffs against sphincter faced adversaries. Nor would comedic asides involving windscreen wipers, pints of claret and gimp suited deities not only fit right in but serve to provide balance. Such is the solid collection of fully formed characters now in play, that Preacher has the luxury to take this story anywhere and people will follow. 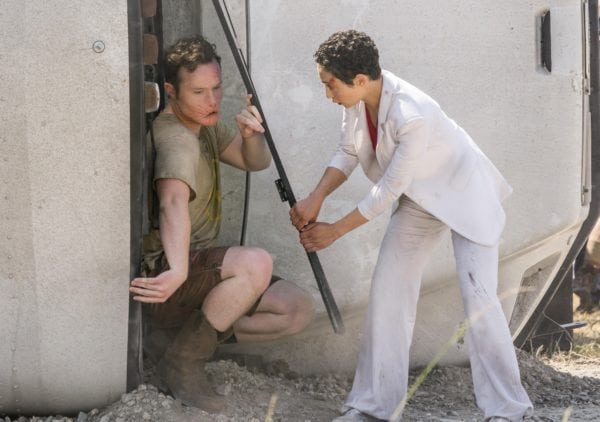 These writers have struck a perfect balance between absurdity, lucid thought and slapstick humour that never feels forced, rewards you with narrative progression and never disappears down the rabbit hole. Through the introduction of some truly tyrannical miscreants as opposition to Custer and crew we have been treated to something fresh and invigorating. TC, Jody, Gran ma’ and Featherstone stand shoulder to shoulder with a game show Satan, ball busting Angel of Death and our favourite cowboy. Throw into the mix an eccentric vampire, his aging landlady and a cellar full of would be followers on top of Grail attention and season three has given us invention, consistency and originality.

Cooper, Negga and Gilgun still form the foundation to this acid induced comic book flashback but these new characters have actually grounded our protagonists. Actions which might seem appalling, misguided, self-centred or deviant now no longer jar. Herr Starr and his Grail team have crossed so many lines of taste that boundaries must be disregarded regularly. However beyond the liking for close quarter claret spillage season three has also given us more backstory, subtly nuanced moments of character and shades of grey beyond the comic book origins. This season feels leaner, meaner and trimmed of all excess baggage. We only learn the necessary and must work hard to piece things together. This final round offers up more than its fair share of revelations, narrative twists and stone cold jaw dropping deviations from expectations. Retribution is in the air tainted by years of recrimination, bottled up powder keg style in one Jesse Custer who just happens to be in a vendetta kind of mood. Best you strap in because Genesis has a few words of wisdom to pass on to the wise.