WWE SummerSlam is just over a week away, and things are really starting to hot up on Tuesday nights.

While Raw may be seriously underwhelming at the moment, SmackDown continues to deliver on a weekly basis, keeping fans interesting in SummerSlam. The WWE title match between AJ Styles and Samoa Joe looks set to be a potential match of the year candidate, while the other title matches all have the potential to deliver on the night.

Elsewhere, The Miz and Daniel Bryan will finally meet in Brooklyn, and their feud continued to escalate with some backstage shenanigans on this week’s show. The brand has a nice mix of talent at the moment, and they are managing to juggle their storylines much more effectively than their Monday night counterparts, despite having an hour less each week in which to do so. 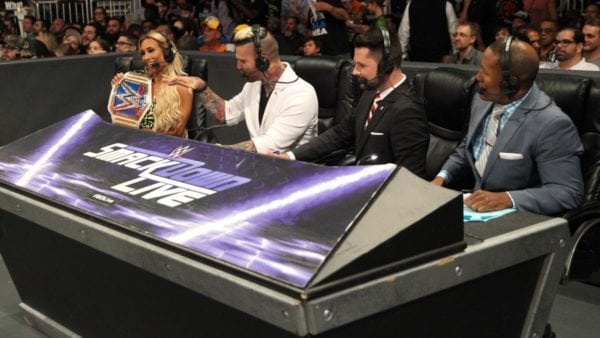 Carmella’s run as SmackDown women’s champion has been a divisive one but it’s difficult to deny that the woman doesn’t know how to draw heat. At SummerSlam, Carmella will put her belt on the line against Becky Lynch and Charlotte, and a potential turn from one of those women could see The Princess of Staten Island walk away from Brooklyn with her gold intact once again this week.

Mella didn’t have a great deal to do on this week’s SmackDown, with her appearance coming at ringside during Becky Lynch and Charlotte’s victory over The Iiconics, but the image of her standing on the commentators’ table lifting her belt up high was still enough to earn her a reaction from the live crowd.

While Randy Orton has not had a match since he made his return to the WWE at Extreme Rules, the Viper has certainly made his presence felt. His recent assaults on Jeff Hardy have instantly established him as one of the top heels on Tuesday nights and his promo work this week was excellent.

Orton has always excelled in a heel role, and he has been screaming out for a change for years now. Whether he is added to Hardy’s match with Nakamura at SummerSlam remains to be seen, but even if he isn’t, expect him to make his presence felt somehow. 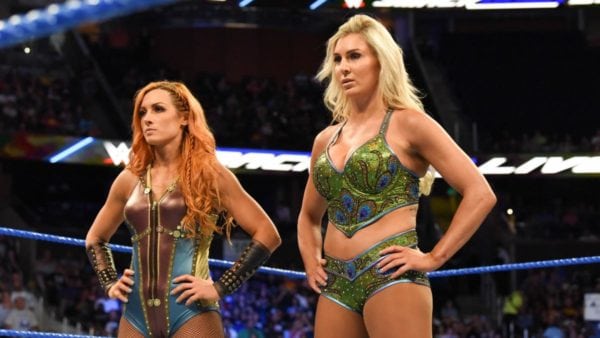 Charlotte Flair picked up her second victory since her return from injury this week, partnering up with Becky Lynch to defeat The Iiconics. The two women will both challenge Carmella for her SmackDown women’s championship at SummerSlam, and the WWE was playing hard on the relationship between the two women during this week’s show.

With Evolution, the WWE’s first-ever all women’s PPV event just around the corner, it seems likely that the company will start to build storylines for the show, meaning there is a very high possibility that one of either Charlotte or Becky will turn on their friend during the match with Carmella, setting up a match between the two women for the event.

The Bludgeon Brothers were out to do what they do best this week- bludgeon some poor jobbers to within an inch of their lives to remind us that they are the SmackDown tag-team champions.

Harper and Rowan are incredibly talented in-ring performers, especially Rowan, but their booking has meant that we haven’t really been given a chance to see what they can do in a competitive match-up, and it has also damaged the rest of the SmackDown tag-team division.

The two men will put their titles on the line against The New Day at SummerSlam in two weeks, and here’s hoping that they finally get an opportunity to show the world what they are capable of.