A man who never does anything by halves, Paul Verhoeven is a director who has courted controversy throughout his career. With a long and varied resume, spanning beginnings in Dutch TV and film, then in and out of Hollywood, there are two particular staples that run throughout Verhoeven’s work – sex and violence. Going back to his beginnings, the Dutch maestro forged a successful collaborative connection with aspiring (and daring) Dutch actor, Rutger Hauer. If Scorsese seemed to relish working with De Niro through the 70’s and 80’s, Verhoeven really loved working with Hauer. They found some success together in the TV show Floris, about a Dutch medieval Knight. Verhoeven brought Hauer back in his sexually charged second feature, Turkish Delight (which followed Verhoeven’s fairly unsuccessful first stab with Any Special Way). The two as a partnership just seemed to create magic, with Hauer’s looks and enigmatic screen presence offering Verhoeven a dazzling focal point.

Soldier of Orange, which again saw Hauer leading, opposite Jeroen Krabbe, was the first film that really brought Verhoeven to wider attention, particularly in the U.S, with a Golden Globe nomination in the Best foreign film category. It’s an engaging and intimate WWII film, offering an insight into a part of Europe under German occupation that cinema had (at the time) rarely covered. Hauer and Krabbe provide excellent performances. The film wouldn’t necessarily suggest quite the unrestrained and erratic nature of Verhoeven as a film-maker (that Hollywood would soon know him for) but it’s still essential viewing.

Hauer had already made a few waves in Hollywood, having been brought to audiences in films like Nighthawks, Blade Runner and The Osterman Weekend, and inevitably, Verhoeven’s Hollywood debut had to star Hauer. Flesh and Blood remains something of a forgotten cult film, which bombed spectacularly at the box office, as well as critically. The film failed to find an audience with excessive sex, violence and filled with reprehensible characters. It’s found cult favour since, particular from Verhoeven fans dipping back to his pre-RoboCop work. 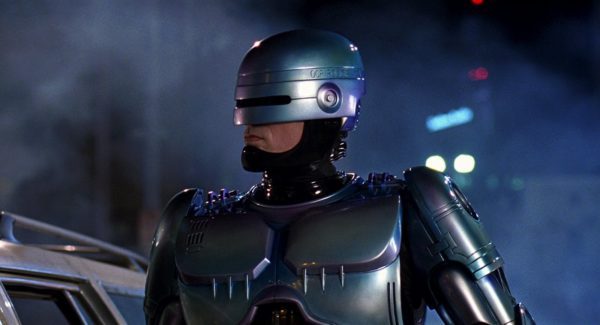 Which brings us nicely to a work that really defined Verhoeven. In every way, it represents just what he can bring to a film, and when his style is most effective. RoboCop is my generation. It’s a film that people of my age grew up watching (when we were far too young to do so). It’s the reason they had the infamous ‘PG’ TV cut, which I never saw but must have run about 15 minutes long without the violence, nudity and swearing. RoboCop is a film boys would have found immensely cool, and satisfied a sense of rebellion, watching this film brimming with cartoonishly violent action when we knew we shouldn’t. RoboCop to my 10 year old self was one of the coolest films ever. A film I could quote. A film I could describe in detail to jealous school mates who weren’t allowed to see it, or weren’t left unattended with a friend’s older brother’s video collection.

In years since, re-watching RoboCop brings a new found appreciation. I recently saw a Criterion interview with a filmmaker, whose name escapes me. He was giving his Top 10 Criterion releases, including RoboCop. Much like myself, he grew up watching it, always loving it but his overriding message was this: ‘I almost didn’t realise just how good RoboCop is, until Criterion released it.’ It is an important piece of cinema. It travails the B movie path proudly, and it’s deliriously unrestrained. The violence goes past gruesome, into macabrely comical. Like a lot of Verhoeven’s films, it’s sexist and exploitative, but it’s also satirical, witty and insightful. 80’s consumerism and corporate greed are pulled apart, but it also makes a wider point on corruption, and prioritising wealthy corporations over public services (particularly in this case, policing). The film is possibly more prescient than ever as Western progress looks to mechanise. This was written in an era of machinery replacing human workers, where industrial towns were becoming Ghost Towns. With the wry dig at 80’s American greed, Verhoeven just added a layer to the Frankenstein aspect of the story, which still works as a fun B movie too.

Most of all though, between the savage violence and the humour, there’s a little heart in RoboCop. Every good Frankenstein monster needs a degree of tragedy, and in no small part thanks to an engaging performance from Peter Weller (Rutger Hauer was the original choice), audiences really rooted for Alex Murphy in his quest for revenge and justice. Add in great support from Nancy Allen as Lewis and brilliant villanous turns by Kurtwood Smith and Ronny Cox, and RoboCop is a cult classic. Though it was viewed fairly favourably as a simple, guilty pleasure, in time it’s just been given more due for its finer points and those elements that make this a great piece of cinema, rather than merely ‘a bit of fun.’ In addition, Basil Poledouris delivers an exceptional score with not only its iconic theme but the ability to invoke an emotional connection between Murphy and audience. Conan the Barbarian aside, it’s Poledouris’s finest work. 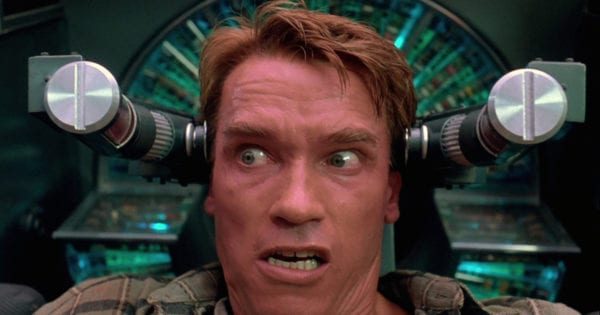 If Verhoeven gained a generation of cult followers with RoboCop, he would strike gold again with Total Recall. A loose adaptation of Philip K. Dick’s short story We Can Remember It For You Wholesale, Recall was a star vehicle for Arnold Schwarzenegger. In his prime and riding high after a string of hits, Arnold was taken into a world of broad sci-fi. A big budget spectacle with aliens, mutants, colonies on Mars and Three Breasted Women. It should have been daft as hell, but boy does it work. For better of worse it’s got pretty much every Verhoeven staple (mostly for the better here). Arnold is brimming with charisma and a dash more humanity than we’d seen from him to that point and the film looks amazing. The visuals, pre-CGI, still hold up brilliantly and the set pieces are supremely crafted. Verhoeven, with his gleefully excessive approach, also knew how to piece everything together expertly. Total Recall is stylish and visually arresting. Like RoboCop, it also features dual dirtbags on sizzling form in Ronny Cox (again) and Michael Ironside. Throw in fierce performances from Rachel Ticotin and Sharon Stone and a great Jerry Goldsmith score, and it’s clear why Total Recall is so adored. It’s got a little of the wry observation of RoboCop, but not quite as much depth, but regardless, that one-two punch put Verhoeven in very high regard (even if he still had staunch critics of his excessive style).

The next film would see Verhoeven taking a loving tread into noir thriller, mixed with a nod back to his beginnings with sexual obsession and femme fatales. Basic Instinct would quickly become iconic, and launch Sharon Stone to the top of the A-list with the opening of her legs. The film would see Verhoeven indulge his whims more than ever (in his Hollywood work). Critics weren’t entirely kind to Basic Instinct, particularly for a misogynist streak, and an air of exploitative excess, but it did have its share of supporters, and would become, because of the controversy and word of mouth (predominantly about the sex scenes) a big success. It does sizzle. It is incredibly silly in places. It is trashy, but it’s also atmospheric, engaging, beautifully shot and features a fantastic score from Jerry Goldsmith (Oscar nominated). Furthermore, Stone is sensational. Then comes another film that is iconic. Not for the right reasons, but Showgirls is a film so astonishing, unrestrained, unabashed, indulgent, sloppy, trashy and demented that it’s become something of a cult favourite, particularly in the last few years. It’s bad. Just horrifyingly, hilariously daft. It came out and bombed. Critics destroyed it, with some claiming it to be one of the worst films ever made. Following in the footsteps of Basic Instinct, which wasn’t great but attracted wide audiences, enticed by the sizzling sexuality, Showgirls was a promise to up the ante further, but ended up almost hilariously unsexy, despite masses of sex and nudity. Verhoeven cast Elizabeth Berkley, who was largely known as one of the gang in tween serial sitcom, Saved By The Bell. The plot is stupid, the acting is terrible and whilst it was greatly entertaining for 13 year old boys able to obtain a sly copy, to adult viewers it was a piece of unadulterated trash, before becoming reconsidered as essential ‘so bad its good’ viewing.

It had been expected to all but kill Verhoeven’s Hollywood career, but the subsequent video success (probably around the time clear pause was perfected in VHS players I guess…) and Starship Troopers would salvage it. An enjoyable sci-fi space romp which saw Verhoeven, to a degree of success, opt for some satirical humour mixed with violent action. It’s not RoboCop or Recall level good, not even close, but it’s great fun, and it spawned a number of sequels and adaptations (albeit almost all terrible). The film didn’t really hit full swing until video, after a disappointing domestic box office run.

Hollywood however had one more swing for Verhoeven to take, with Hollow Man, but ultimately this lacked energy, and felt possibly the ‘safest’ film Verhoeven has ever made. It lacked even that unfiltered, impish excess of Showgirls, which as bad as it was, was still Verhoeven at his most blisteringly energetic. Hollow Man is okay, but it’s just a little lifeless. A bit dull. It was the mark of a director perhaps past his peak and running out of creative juice. Perhaps a career of batting away naysayers and critics had taken its toll, but it did look like Verhoeven was finished. In Hollywood he certainly was, and it would prove a lengthy period until he resurfaced back in Holland with Black Book. An almost unofficial follow up to Soldier of Orange, Verhoeven revisited WW2, German occupied Holland. Not only would the film mark a triumphant return to critical form, but it also saw Verhoeven attain widespread critical acclaim (and in many corners, new found respect). 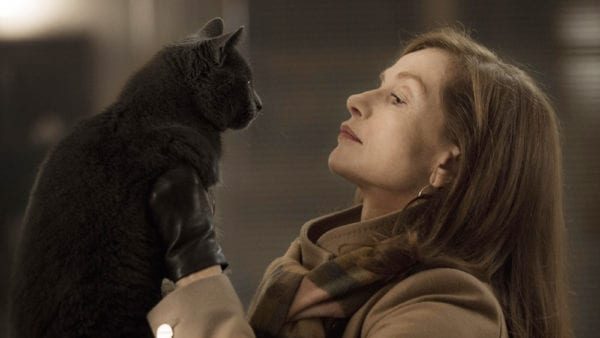 It would be 10 years until his next full feature (with the rather short, 50 minute feature Tricked in between) but Verhoeven, approaching 80 years old, produced another critical smash with Elle, a French thriller starring Isabelle Huppert. The plot is pure Verhoeven, but it is a refined subtlety and psychological complexity that enraptured audiences and ensured it didn’t descend into farce or exploitation. You might say to a degree, it showed a maturing in Verhoeven as a film-maker. An ability to do restrain. To do introspection. It only took 78 years, but Elle is a fantastic piece of filmmaking, requiring this new approach from the Dutch master. Perhaps his days of inspired excessiveness with Robot cops et al, are behind him, but this shows the craftsman is still in fine fettle. At his best, Verhoeven has always offered a great platform for interesting character actors and his leads. Huppert is exquisite in Elle, exceptional and clearly the director provided a set conducive to inspiration.

Verhoeven is currently filming Bernadetta, taking us to 17th Century Italy (though it is a French film), and a tale that promises some of his staples. If he delivers with the same subtlety as he did in Elle, it could be another success for the divisive Dutchman. With a cast that includes the amazing Charlotte Rampling, elements are in place for what may even be his last film.

What is your favourite Verhoeven film? Let us know in the comments below…