Doctor – “I have to lay down the rules if someone is new!” 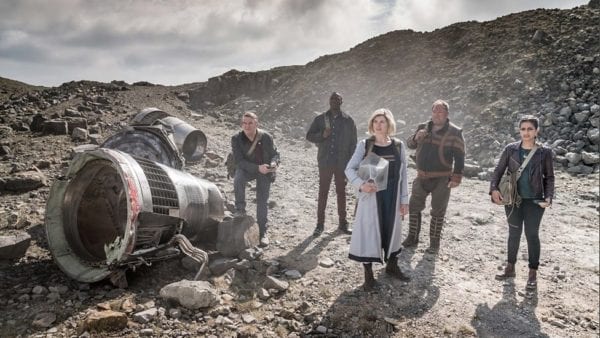 And so Series 11, Jodie Whittaker’s first run, comes to a close!  This blast of the first double X’d chromosomed Doctor really seems to have zoomed past a heck of a lot quicker than any previous Doctor Who run before.  Perhaps because it’s new and exciting or maybe it is for another reason at the complete opposite end of the spectrum. Either way we’ve arrived at The Battle of Ranskoor Av Kolos at it’s time to see how this all ends.

On the planet Ranskoor Av Kolos both Andinio (Phyllis Logan) and Delph (Percelle Ascott), followers of Ux, are in the process of testing their impressive elemental-like powers when they are interrupted by a blinding flash and a tester of their faith. 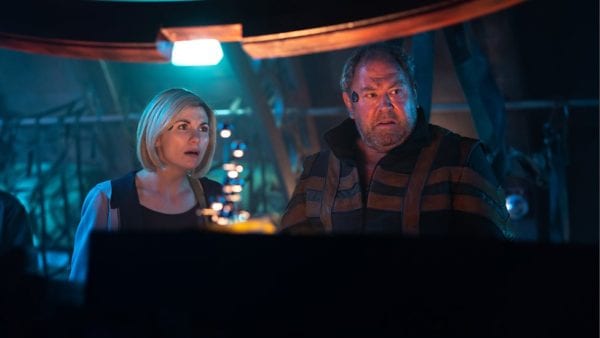 Just over three thousand years later the Doctor and her ‘Fam’ are drawn to nine separate distress signals from the aforementioned planet, though this won’t be the simplest of rescues due to the violent atmosphere of the planet disrupting any visitors minds; causing severe memory loss and paranoia.  Using Neural Balancers the TARDIS lands and it’s not long before the Doctor and Companions meet their first stranded – and mentally lost – occupant called Paltraki (Mark Addy), though with the aid of diplomacy and a spare neural balancer he slowly helps fill in a few blanks of what’s occurred – those he can remember anyway.

Within minutes of helping this lost traveller, those imposing terror across this planet contact the now ‘awakened’ Paltraki, threatening to execute his crew one-by-one if what he stole isn’t returned – which is a strange object that the Sonic Screwdriver cannot scan.  However, the voice of the executioner is recognised by the TARDIS travellers and the viewer proves them correct – somehow Tim Shaw (Samuel Oatley) from Earth has arrived here on Ranskoor Av Kolos.

With the Doctor wanting urgent answers and Graham wanting revenge for the death of his wife Grace, the team head towards the fortress of Tim Shaw unsure what the end will bring. 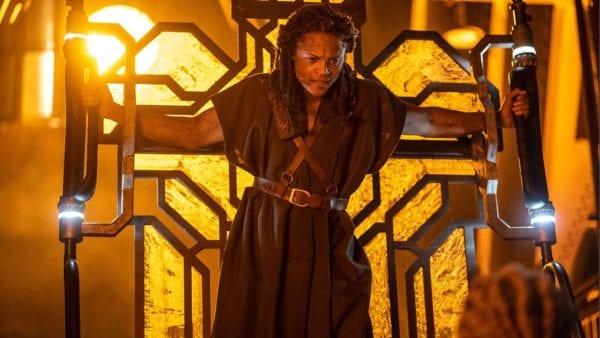 Is this it?  Honestly!? Is this the final episode of Series 11!? Bringing back the wicked tooth fairy from episode one and making it a flawed ‘revenge’ episode.  This in no way can even be classed as a ‘wrap up of the series’ episode.  It lacked everything from the numerous Doctor Who climactic episodes of the past, which had stamped ‘MUST IMPRESS’ across the front.  I’ve enjoyed a fair chunk of Series 11, but here I think Chris Chibnall must have thought, ‘Well, two more episodes to go!’, as he can’t have seriously considered this to be a worthwhile ending.

Tim Shaw (Tzim-Sha if we’re splitting hairs) used again!?  Why was this ‘enemy’ even considered a worthwhile foe? If I wanted to bring back a timeslipped bad’un, I would have picked Krasko (Joshua Bowman); smart(ish), thrown through time, he liked to outwit his enemies and would have had to use others to inflict pain.  It would have also made sense why Delph was strung up and not Andinio, due to Krasko’s racist leanings. 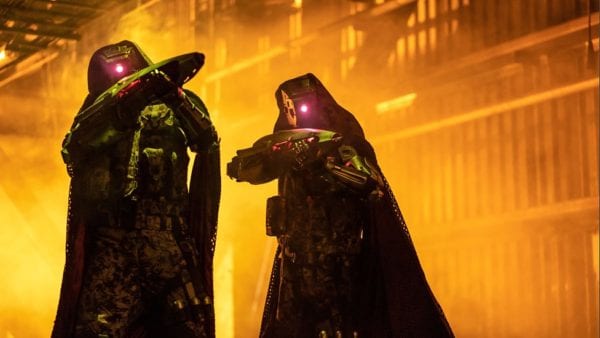 Then we had the neural balancers that in truth just seemed to stop Yaz and the Doctor getting a bit of a headache.  I was expecting a full blown losing the plot from at least one of them. Seeing the Doctor going Twin Dilemma/Colin Baker on Yaz would have been excellent, even for a brief moment, but no just a case of, “Pass the paracetamol”.  Then to top it all off we had the TARDIS doing a Deus ex machina, conveniently popping the planets back into place – with the help of the Ux – with no further worries or questions asked.  It all just rounded off the episode as poor.

We can only hope that during 2019 Chris Chibnall will sit down with Moffat, Cornell, Davies, Blackman, Patel, Gatiss and a few others and say, “So I need a bit of help…”, then come 2020 we will get a storming Series 12.