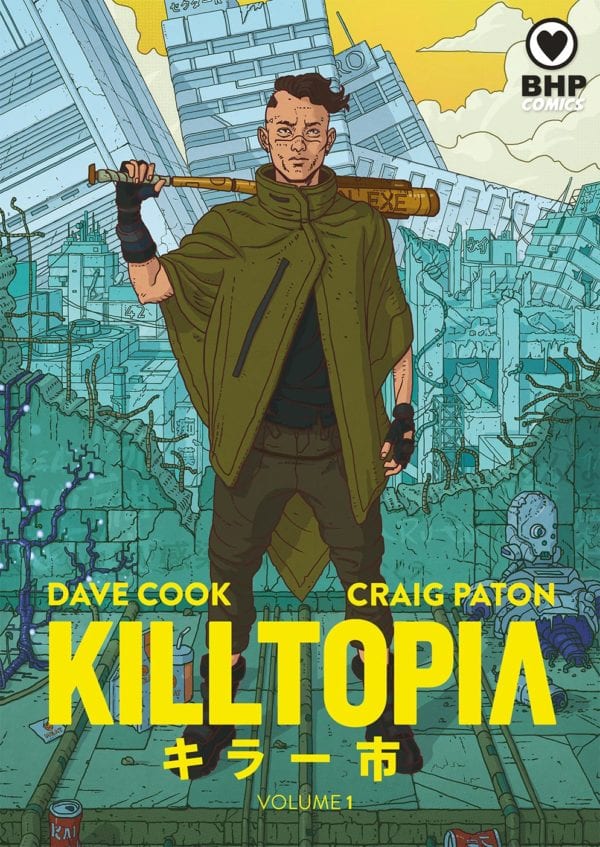 Brought to us by Card Shark Comics based in Glasgow, Killtopia Vol. 1 is a violent and deadly introduction to this post-apocalyptic cyberpunk version of Japan.

The comic, made possible by a successful Kickstarter, brings us a desolate world ravaged by mechs who have spread a disease called the rot through the poor populace. Quirky and dangerous mercenaries called Wreckers rule this wasteland, hunting down mech’s and selling their parts for scrap.

We are introduced to the world through a grand competition about to unfold: Wreck-Fest X. This deadly challenge brings together Wreckers from around the world in a deadly battle royal for fame and glory. People are literally killing each other for tickets and selling their gonads for a chance to see the celebrities of this world duke it out in mortal combat. On the other end of the spectrum we are introduced to our protagonist Shinji Kamiya. Shinji is a down and out wrecker trying to scrape by on the pathetic mech scraps found in the Killtopia.

Trouble quickly brews when an over the top Wrecker called Dr. Scratch bursts into the scene chasing down a bipedal mech and scaring off Shinji’s meal ticket. Suddenly the mech starts talking in a native tongue forcing Shinji to intervene. A sonic boom and a plasma cannon blast later, Shinji and the mysterious talking robot find themselves running from the law.

We find out a mysterious organisation are hunting for special sentient bots and put a massive bounty on Shinji’s head (as well as smashing a poor snitch to pulp). With every top Wrecker and the police hunting them, Shinji and the odd mech called Crash seek out an old friend for help but danger lurks around every corner.

Killtopia Vol. 1 is an intense introduction to a new series, showing off it’s diverse character design and very attractive comic style backgrounds. A highlight panel was a birds eye view showing Shinji and Crash chatting away while one of the Wrecker assassins watches from a rooftop. It’s wearing influences on its shoulder proudly, with Ghost in the Shell-like body modifications to the neon soaked mega-Tokyo vibe of Akira or Blade Runner. It’s not subtle with the violence and sex, with bodies cut in half, sex shops and posters in every corner and crude language used at every opportunity. It’s not faultless, the action scenes are somewhat stilted and the drawn hands suffer in some panels but that can be ironed out.

There’s a lot to absorb in this first comic but the writing capability of Dave Cook shows through. Combine that with the catchy art of Craig Paton and it makes for a great page turner that leaves us with an intense cliffhanger.