To celebrate the release of DAVE MADE A MAZE – available on Blu-ray and Digital HD from January 28th and premiering on the Arrow Video Channel on January 25th – we’re giving away a Blu-ray, a limited edition t-shirt from pixel art designer Takekiyo and a mystery cardboard prop used in the film! 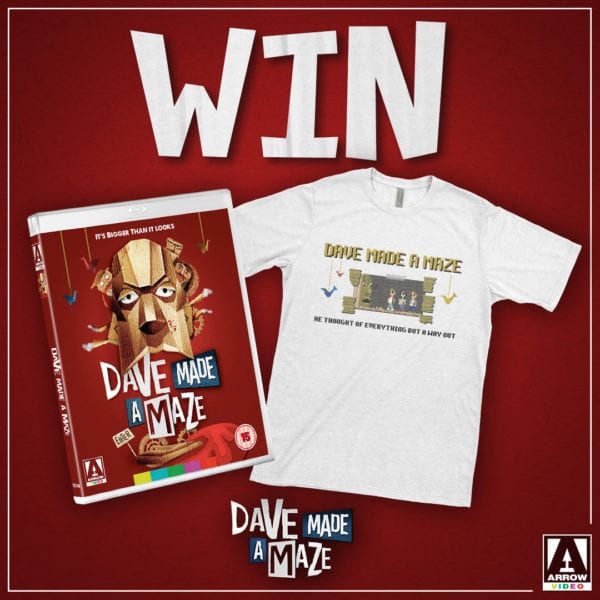 Imagine Michel Gondry and Tim Burton given unlimited cardboard, sellotape and a film camera, and you’re somewhere close to getting this dazzlingly original, Saturn Award-winning horror comedy from debut director Bill Watterson. A cult classic in the making, this brilliantly realised homage to fantasy adventure films from the 1980’s features incredible and imaginative production design, that literally takes you out of this world, and into the chaotic and creative mind of Bill Watterson. Described by Nerdist as “a homemade Labyrinth for adults”, this critically-acclaimed indie gem offers a modern comedic edge and an even higher body count.

With a smattering of quirky comedy film stalwarts among the cast, including American Splendor’s James Urbaniak and Groundhog Day’s Rick Overton, a mad music score from Mondo Boys (The Girlfriend Experience) and an opening credits’ song from the UK’s own The Equals, sparklingly witty dialogue, and a truly demented premise, this might be the world’s first fully recyclable cardboard horror comedy – you’ll want to watch it over and over again.

Available on Blu-ray and Digital HD from January 28th. Watch it Any Time, Any Place, Any Screen. Pre-order today here.

The competition closes at midnight on Sunday, February 10th. UK readers only please. To enter, use one of the following methods…