To celebrate the Blu-ray and DVD release of Wrestlemania 2019 (available to buy from 3rd June 2019) – we are giving away a Blu-ray to one lucky winner. 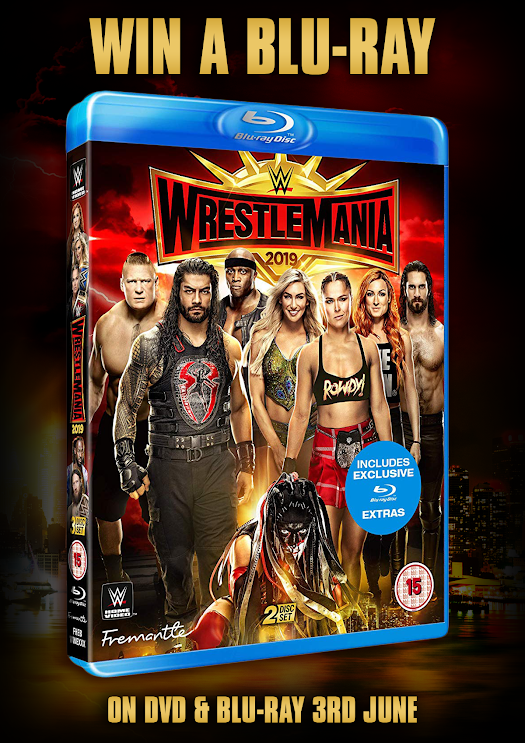 It’s the biggest sports-entertainment spectacle of the year, a pop culture phenomenon, and the Show of Shows – WrestleMania! This year’s edition of the event is a true history-making moment as the women’s division main events WrestleMania for the first time ever, with a “winner takes all” Triple Threat Match that sees Ronda Rousey, Charlotte Flair, and Becky Lynch battle it out for both the Raw and SmackDown LIVE Women’s Championships! WrestleMania also becomes “Kofi-Mania” as Kofi Kingston challenges WWE Champion Daniel Bryan, while Seth Rollins tries to slay “The Beast” Brock Lesnar in a clash over the Universal Championship! Also features historic moments from Roman Reigns, John Cena, Kurt Angle, Triple H, Batista, Miz, Shane McMahon, Randy Orton, AJ Styles, Sasha Banks, Bayley, The IIconics, and more!

There’s no show on Earth like WrestleMania, and this will go down as one of the greatest ‘Manias in WWE history! At an incredible five-plus hours, it’s the most action packed show of the year, stacked with all of WWE’s top Superstars!

There’s heart-stopping drama in the Ronda Rousey vs Charlotte Flair vs Becky Lynch match – the biggest moment so far in the evolution of WWE’s incredible women’s division – and Kofi Kingston wins the hearts and minds of the WWE Universe in his emotional challenge for the WWE Championship!

There are also dramatic twists and heart-pounding action in the brutal Triple H vs Batista No Holds Barred Match, the wild Miz vs Shane McMahon Falls Count Anywhere Match, and the exciting collision between Brock Lesnar and Seth Rollins!

And witness more history making-moments from the women’s division, Kurt Angle in his retirement match, and Roman Reigns as he returns to the Grandest Stage of Them All!

As ever, WrestleMania is as much about the spectacle of the event itself, with dazzling pyrotechnic displays and grand entrances – plus surprise appearances from some of WWE’s greatest ever Superstars!

And this year’s 3-disc DVD edition is packed with extra features, including ALL FOUR Kickoff Show matches and the Raw after WrestleMania – plus an extra bonus feature on the 2-disc Blu-ray edition of Dean Ambrose’s farewell address to the WWE Universe!

Don’t miss your chance to own the epic WrestleMania 35!

The competition closes at midnight on Sunday, June 9th. UK readers only please. To enter, use one of the following methods…