It’s time to experience extreme vengeance as Park Chan-wook’s sensationally violent masterpiece OLDBOY, releases again on the big screen with a newly mastered 4K restoration. To celebrate, we have a phenomenal quad poster of the film available for one lucky winner, courtesy of Arrow Video. 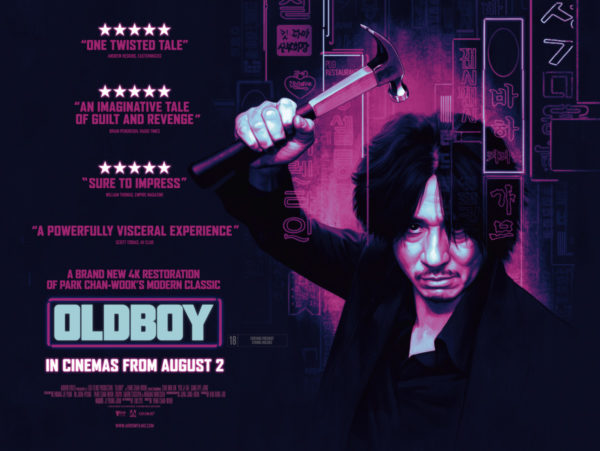 Often cited as one of the best films of the 2000s and possibly the definitive example of extreme Asian cinema, Oldboy is a brutal, lyrical modern classic of the revenge genre. Directed with immense flair by Park Chan-wook (The Handmaiden) as the second instalment of his Vengeance Trilogy, Oldboy blazed a trail at the 2004 Cannes Film Festival where it was lauded by the President of the Jury, director Quentin Tarantino.

The film went on to become a huge international smash, blowing audiences minds with its concoction of filmmaking virtuosity, ingenious plotting, violence and pathos. Packed with shocking twists and eye-popping set pieces – including the much-imitated hammer attack sequence, and a sushi meal you might not want to sample – and anchored by an astonishing lead performance by Choi Min-sik, Oldboy really is a stunning and unmissable (and endlessly rewatchable) cinematic masterpiece.

OLDBOY will release in select cinemas on the 2nd August, and on 4K digital download on 26th August, courtesy of Arrow Video.