BUSTER KEATON: 3 FILMS, a collection of essential films from one of the greats of cinema operating at the height of his powers, is OUT NOW on Blu-ray courtesy of Eureka Video, featuring stunning restorations of Sherlock Jr., The General and Steamboat Bill Jr., and we have three copies to give away! Read on for details… 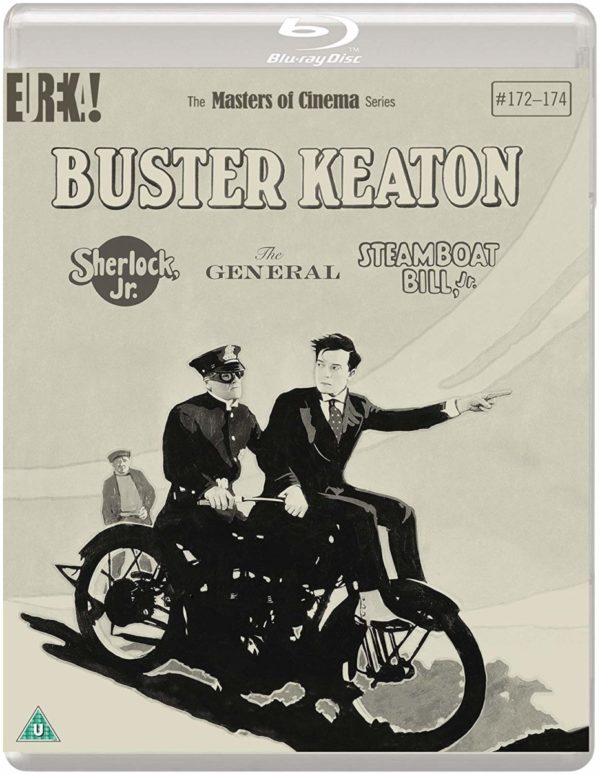 Between 1920 and 1929, Buster Keaton created a peerless run of feature films that established him as arguably the greatest actor-director in the history of the movies . Collected here are three key films from that era; Sherlock Jr., The General and Steamboat Bill, Jr. Together they represent a true master at his peak, and The Masters of Cinema Series is proud to present all three films from stunning 4K restorations.

Sherlock Jr. (1924) A film projectionist (and amateur detective) offers to solve the case of a missing watch, but is instead framed for the crime himself. Desperate to clear his name, the projectionist dreams of being the great Sherlock Jr., and in one of cinemas most iconic sequences, literally steps into the screen to bring his fantasies to life.

The General (1926) When union spies steal his locomotive (along with his girlfriend), a plucky railway engineer pursues them doggedly across enemy lines. Containing one of the most memorable chase sequences in the history of filmmaking, The General is widely considered to be Keaton s masterpiece.

Steamboat Bill, Jr. (1928) A steamboat captain receives a telegram informing him that his son who he has not seen for many years will be coming to visit. Eagerly expecting a strapping young lad who will help him compete with his arch-rival, he is disappointed with the effete progeny that instead shows up. Best remembered for its climactic cyclone sequence in which Keaton performs a number of death-defying stunts whilst an entire town is destroyed around him, Steamboat Bill, Jr. was Buster Keaton s last independent silent comedy and also one of his finest.