To celebrate the Blu-ray and DVD release of WWE: SummerSlam 2019 (available to buy from 7th October) – we are giving away a Blu-ray copy to one lucky winner. 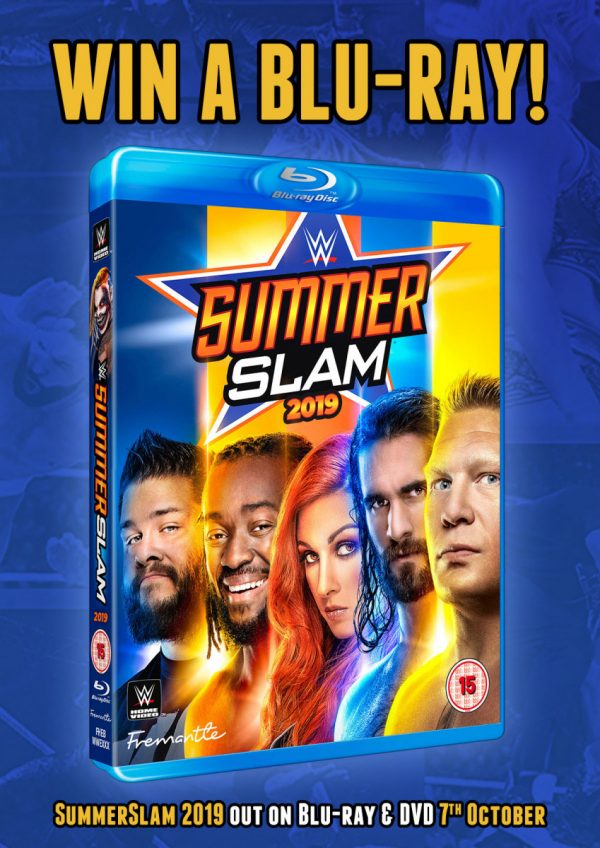 It’s the biggest party of the summer and one of the most important pay-per-view events of the year, SummerSlam! Seth Rollins tries to slay The Beast once again as he challenges Brock Lesnar for the Universal Championship! And Kofi Kingston defends the WWE title against Randy Orton in match that’s almost ten years in the making! Plus more action from Becky Lynch, Kevin Owens, Bray Wyatt, Trish Stratus, and the return of Goldberg!

This year’s event has incredible performances as Seth Rollins battles Brock Lesnar in a rematch from their collision at WrestleMania, Becky Lynch pits her Dis-Arm-Her against Natalya’s Sharpshooter, and Randy Orton makes it personal as he tries to take Kofi Kingston’s WWE Championship!

And as always with WWE, you have to expect the unexpected.

The return of Bray Wyatt as “The Fiend” is one of the most terrifying moments in WWE history, and the return of Goldberg rocks the WWE Universe – not to mention Dolph Ziggler – with Goldberg’s trademark power and dominance!

There’s history in the making as eras collide in a Charlotte Flair vs Trish Stratus match that will determine to true Queen of WWE. Not only is it Trish’s last ever match, but it takes place on her home soil of Toronto, Canada. When these two alpha females lock up it’s one of the greatest women’s matches ever!

There’s also devious trickery as Shane McMahon tries to stack the odds against his rival Kevin Owens. But can KO beat Shane at his own game and save his career?! And elsewhere on the show, Ricochet must overcome the OC as he challenges AJ Styles for the US Championship in a dazzling high-octane matchup!

The competition closes at midnight on Sunday, October 13th. UK readers only please. To enter, use one of the following methods…