To celebrate the digital, DVD and Blu-ray release of Child’s Play we are offering you the chance to win a copy on Blu-ray. 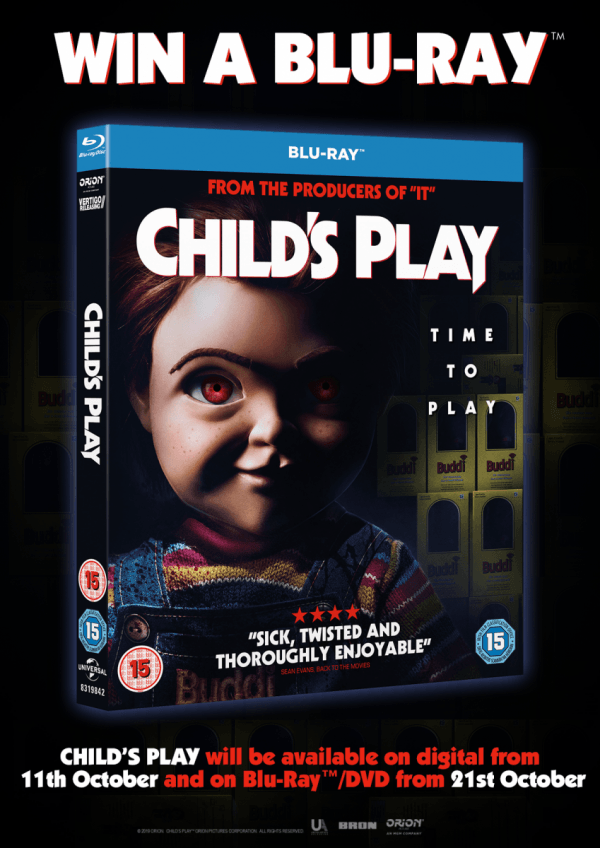 Chucky – the classic killer doll and horror icon – gets a 21st century upgrade in this critically acclaimed, razor sharp horror-comedy. Gruesome, creepy, and with a great cast – including Mark Hamill as the voice of the Buddi doll Chucky – Child’s Play is bloody good fun and charged with electric, retro cool. It’s a film that critics have called “Gory, ridiculously inventive and very, very funny” (Jamie East, The Sun – ★★★★)

For fans of old school slasher horror, Child’s Play is like a knife plunged straight into the nostalgic pleasure zones. But the all-new Child’s Play is wickedly smart too. Chucky gets an upgrade in every way possible. He’s hardwired with plenty of heart, and he’s fully smart and WiFi-ready, which takes the horror – and hilarity – into new tech-savvy territory. As the critics have said, Child’s Play is “one of the spryest satires of the year.” (Charlotte O’Sullivan, Evening Standard – ★★★★).

When it’s funny, it’s very funny, and when it’s gruesome, it’s very, very gruesome. There’s creepy, knife-edge tension as director Lars Klevberg cranks up the scares, and gore- hounds will go crazy for some of the most inventive and gut- churning – not to mention gut spilling – set-pieces in modern horror. Which is exactly why critics has said, “Child’s Play bubbles with entertaining bad taste.” (Peter Bradshaw, The Guardian – ★★★★)

You won’t want to miss out on the all-new Child’s Play – it’s killer stuff!

Child’s Play will be available on digital from 11th October and on Blu-ray /DVD from 21st October. Order today here.

The competition closes at midnight on Sunday, October 27th. UK readers only please. To enter, use one of the following methods…