Eureka Entertainment to release THREE FILMS WITH SAMMO HUNG: THE IRON-FISTED MONK / THE MAGNIFICENT BUTCHER / EASTERN CONDORS, a trio of spectacular martial-arts films from one of Hong Kong cinema’s most iconic figures, presented FULLY UNCUT (for the first time ever in the UK) from brand new 2K restorations (WORLDWIDE DEBUT) in a 3-Disc Blu-ray edition as part of the Eureka Classics range on 23rd September 2019, and we have three copies to give away! 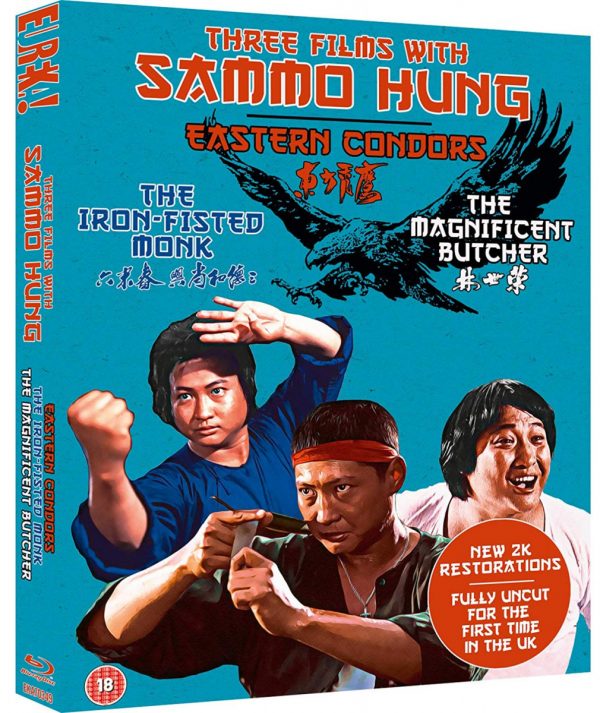 One of the most prolific figures in the history of Hong Kong action cinema, Sammo Hung (Hung Kam-bo, or more affectionately, “Da Goh Da” [Big, Big Brother]) has worked as a stuntman, actor, choreographer, producer and director in a career spanning almost 60 years (his first film appearance was in 1961). Presented here are three highlights from his incredible career, showcasing his incredible skill and artistry both in front of, and behind the camera.

The Iron-Fisted Monk [1977] – Sammo Hung’s directorial debut, The Iron-Fisted Monk introduced many of the choreographic and editing techniques that would become commonplace in modern action cinema. A significantly darker and more violent film than audiences were used to, the film was originally cut when released on UK home video, but is presented here fully uncut for its worldwide Blu-ray debut from a brand new 2K restoration.

The Magnificent Butcher [1979] – Directed by the legendary Yuen Woo-ping as a spiritual successor to his earlier smash hit, Drunken Master, The Magnificent Butcher stars Sammo as “Butcher” Lam Sai-wing, a pupil of Wong Fei-hung (the role Jackie Chan portrayed in Drunken Master, but here played by Kwan Tak-hing who played the legendary folk hero in over 70 films). When Lam is framed for murder by a rival clan, he must track down the real murderer and fight to clear his name. To be strong enough to have a chance of winning, he must train under the original Drunken Master, Beggar So! Presented from a brand new 2K restoration.

Eastern Condors [1987] – Quite possibly Sammo’s best film, this high-kicking tribute to The Dirty Dozen sees ten convicts offered amnesty if they undertake a deadly mission behind enemy lines in Vietnam to destroy a top-secret munitions dump. Featuring numerous references to Western war movies, such as The Deer Hunter and Rambo: First Blood Part II, Eastern Condors is an action masterpiece like no other, filled with incredibly dangerous stunt sequences and full-contact fight scenes that left its cast bloody and bruised. Presented here fully uncut for the first time ever in the UK, and from a brand new 2K restoration, this film is an absolute must-see!