To celebrate the DVD release of WWE: Clash of Champions 2019 (available to buy from 28th October) – we are giving away a copy to one lucky winner. 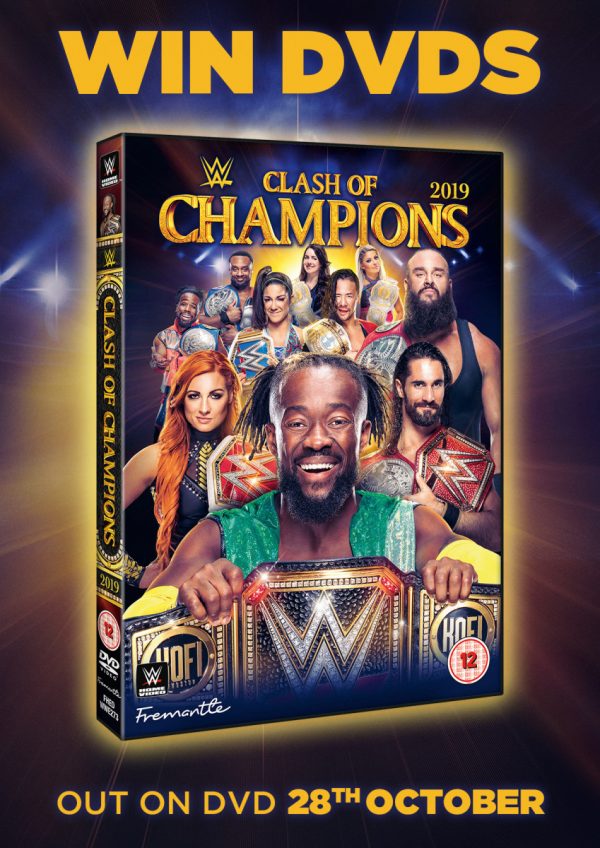 It’s Clash of Champions, one of the most prestigious nights of the year in WWE, with an incredible eight championships on the line! Seth Rollins and Braun Strowman must work together as the defending Raw Tag Team Champions but they also collide later in the show as Seth defends the Universal Championship against his own partner! WWE Champion Kofi Kingston looks to end a ten-year rivalry against Randy Orton and tension boils over as Raw Women’s Champion Becky Lynch battles Sasha Banks! Plus much more action!

Nothing raises the stakes in WWE like a championship being put on the line… and nothing brings out the best in a WWE Superstar like an opportunity to wear the gold for themselves!

There’s tension as Seth Rollins and Braun Strowman try to work together as Raw Tag Team Champions and jaw-dropping action as the partners later clash in a David vs Goliath-style battle for the ages!

The rivalry between Becky Lynch and Sasha Banks reaches new levels of intensity as “The Man” and “The Boss” lay it all on the line, and Kofi Kingston takes the fight to Randy Orton in their most heated matchup to date!

There are also big surprises in store – a shocking return that stops Roman Reigns in his tracks and an unexpected appearance from the most feared and FIENDISH Superstar in WWE!

The competition closes at midnight on Sunday, November 10th. UK readers only please. To enter, use one of the following methods…