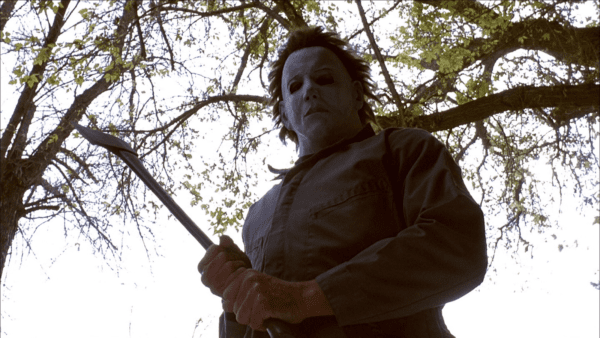 Following a six-year break between movies, the sixth Halloween film finally hit screens in 1995, and given its infamously roughshod production – in which extensive re-shoots resulted in two distinct versions of the film – it’s little surprise the end result is a near-total trainwreck.

The production was too cheap to pay Danielle Harris more than $1000 to reprise the role of Jamie Lloyd, so the character was recast (with J. C. Brandy), and to make matters worse, she’s unceremoniously killed off 20 minutes into the film. But of course, not before giving birth to a bouncing baby boy, who becomes the object of Michael Myers’ latest seasonal pursuit.

Donald Pleasence is back, at least, though his failing health is obvious throughout, and he died shortly after principal photography wrapped. This left him unavailable for re-shoots, meaning Dr. Loomis is forced to randomly disappear from the middle of the movie.

As if all this isn’t bad enough, Daniel Farrands’ script – admittedly massively re-worked during production – is a mess of contrivance and over-explanation. Paul Rudd’s Tommy Doyle – the boy babysat by Laurie Strode in the original Halloween – plays unwitting babysitter himself to Jamie’s helpless son, while Laurie’s adoptive aunt and uncle inexplicably move into the Myers house, and plenty of terrible soap opera family discord ensues between the inevitable killings.

Nothing is more infuriating, though, than the decision to completely drain Myers of all his mystery. A comically overdone series of exposition dumps explain that Myers is effectively a pawn in the scheme of a cult, rather than the terrifying, senseless embodiment of evil he was in the first film. In fact, the only ounce of restraint Halloween 6 shows towards Michael comes by ditching the woeful implication from the Producer’s Cut that Jamie’s son was the product of rape from Michael himself.

Technically-speaking, this is also a total mess; it’s by far the worst-edited film in the franchise, with numerous dialogue-based scenes consisting of shots that don’t match or adhere to even basic conversational logic, and the hilariously abrupt ending is woefully sloppy even for this movie’s basement-low standards. Franchise vet Alan Howarth meanwhile contributes his final and worst score of the series, doubling down on absurd drum solos and guitar riffs that feel wholly inappropriate for the tone of the movie, not to ignore the irritating over-abundance of loud tension chords.

It’s got one good death scene – Laurie’s uncle gets electrocuted until his head explodes – and a 25-year-old Paul Rudd gives a toe-curlingly awful performance, but apart from these tender mercies, it’s an interminable bore of a film even at just 88 minutes in length.

This franchise-derailing entry commits the cardinal sin of demystifying Michael Myers with a howlingly silly origin story. Moreover, it was bad enough that it prompted 1998’s Halloween H20 to jettison the events of the three prior films entirely.