We’re giving away a 4K Ultra HD Blu-ray to celebrate the release of THE DANIEL CRAIG COLLECTION – out 11th November. 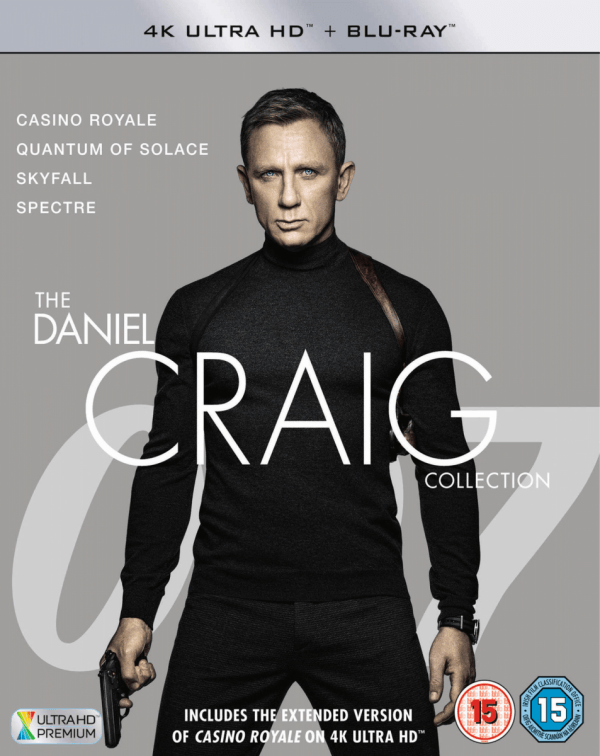 The complete collection of the four James Bond films starring Daniel Craig as 007, which will be available for the first time on 4K Ultra HD™ in Dolby Vision®. Casino Royale, Quantum Of Solace, Skyfall, and Spectre will be available to own as a Collection for the ultimate at home movie-watching experience. The release includes select special features on Casino Royale and Skyfall.

From his introduction in Casino Royale through to his most recent mission in Spectre, Daniel Craig as Bond has experienced explosive action and adventures while his character crisscrossed the globe in a non-stop quest for justice.

Craig is currently in production on his fifth installment as James Bond in the franchise’s highly-anticipated 25th feature film NO TIME TO DIE from Albert R. Broccoli’s EON Productions, Metro Goldwyn Mayer Studios (MGM), and Universal Pictures International, which is set for theatrical release on 3rd April 2020.

The 4K Ultra HD Blu-ray discs of THE DANIEL CRAIG COLLECTION will feature Dolby Vision® ultra-vivid imaging. When compared to a standard picture, Dolby Vision® can deliver spectacular colors never before seen on a screen, highlights that are up to 40 times brighter, and blacks that are 10 times darker. With Dolby Vision®, you will feel as if you are inside the action alongside 007 as the picture comes to life.

The competition closes at midnight on Sunday, November 24th. UK readers only please. To enter, use one of the following methods…