To celebrate the DVD release of WWE: Crown Jewel 2019 (available to buy from 6th January 2020) – we are giving away a copy to one lucky winner. 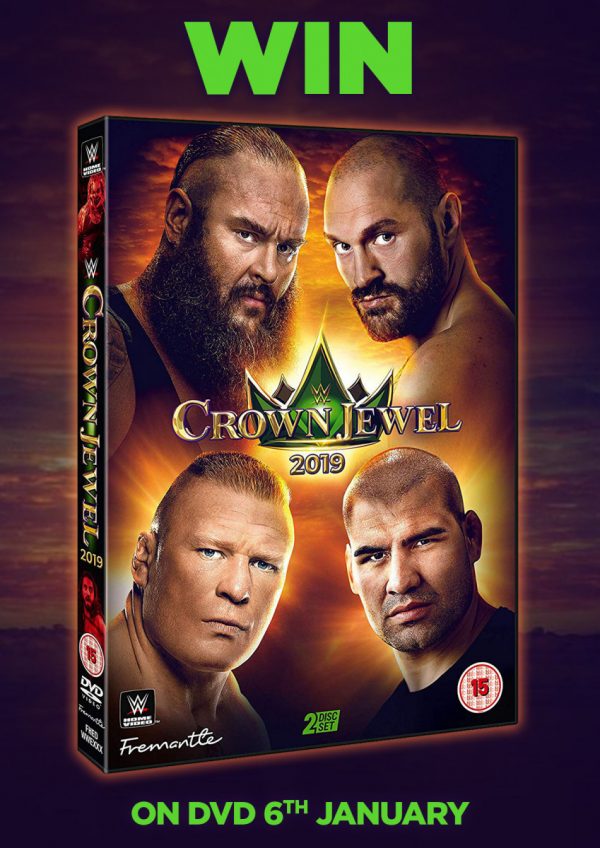 WWE returns to the Kingdom of Saudi Arabia for another historic event packed with huge matchups. Brock Lesnar defends his WWE Championship against former UFC rival Cain Velasquez, boxing megastar Tyson Fury steps into the world of sports-entertainment to battle Braun Strowman, and Seth Rollins puts the Universal Championship on the line against “The Fiend” Bray Wyatt! Plus, the first ever WWE women’s match in Saudi Arabia and much more action!

It was a blockbuster night inside the King Fahd International Stadium in Riyadh as WWE put on a mega-show big enough to rival WrestleMania!

Both Cain Velasquez and Tyson Fury stepped into a WWE ring for the first time – something many fans have dreamed of seeing but never imagined would actually happen!

Velasquez was the man who dethroned and scarred Brock Lensar in UFC, but could he do the same again with the WWE Championship on the line? And what will happen when Tyson Fury – the most fearless, unconventional heavyweight boxer in the world – collides with “The Monster Among Men” Braun Strowman?

It’s an emotional moment for Lacey Evans and Natalya as they battle in the first ever women’s match in Saudi Arabia – a history making moment in WWE’s Women’s Evolution!

There’s also a dark twist in Seth Rollins’ Universal Championship reign when he faces “The Fiend” in one of the most shocking and deranged matches in WWE history, plus huge action when Hulk Hogan and Ric Flair reignite and old rivalry to lead two teams of WWE’s top Superstars against each other!

The competition closes at midnight on Sunday, January 5th. UK readers only please. To enter, use one of the following methods…