Villordsutch on the Great Fandom Swindle….

Having just returned, with a bitter taste in my mouth, from a weekend of sci-fi fandom I’ve begun to wonder when did it all go wrong?  Not with us (to an extent), but by being fooled into shelling out a small fortune, just for the privilege of ‘glad handing’ those that have graced our screens, both small and large.  When did we collectively agree to accept this and how long will we carry on doing so? 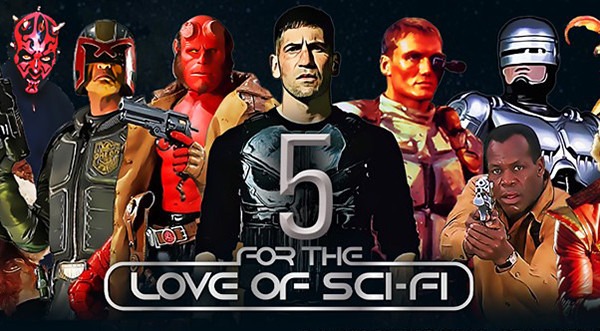 Let me take a step back here, to what fired up all this rather jaded pondering.  The weekend of the 7th and 8th December 2019 was the 5th Anniversary of “For the Love of Sci-Fi” (Manchester UK) hosted by Monopoly Events.  This was an event full of stars including Jon Bernthal, Karl Urban, Warwick Davis, Brian Blessed and Peter Weller to name but a few. As the title suggests you’d believe this was some sort of calling for anyone, including myself, who can name a Star Trek: The Next Generation episode within the first ten seconds of transmission.  So with press accreditation attached I headed straight for it – though for a member of the public ticket prices can break £150 for the weekend, which would secure you a Diamond Pass.

With Saturday instantly not starting great as I found myself parking on a side street (this costing me £10!), led there by illegal parking attendants, according to Monopoly Events who stated this on their Facebook Page come Sunday).  Though on Saturday morning I checked with the Parking Attendants directly outside Bowlers Centre who informed me “yes it was parking” and “a private firm took it from under them overnight”.  So already, before I’ve walked through the door, my wallet is lighter and the parking security is somewhat lax to say the least.

Making my way to the front door and flashing the printed email, a black Sharpie pen was crossed onto the back of my hand, this alone now indicating I’m press.  However, this magic cross didn’t grant me any interviews, nor did it give me access to the leaflet containing the events of the day. When I enquired, “What was the hashtag to tweet out?” the staff member had no idea.  There was a train of people behind me, there must have been a thousand plus and yet here at the main entrance was someone not on brand. £10 down and a member of staff unsure of the product they were promoting. My Spider Sense was tingling.

Walking into the reception area of a Sci-Fi event, what would you expect to greet you.  Throngs of Lightsaber wielding Ewoks!? Star Trek Red Shirts battling to the death with Orion Slave Girls!?  Or perhaps a Mystery Box subscription service and a Cup Cake and Fudge stall? Yes, I wasn’t expecting the last two either. 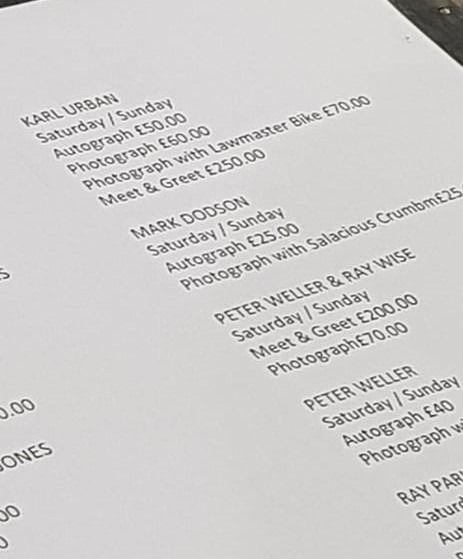 Want to meet you heroes? How much have you got?

Rapidly however I discovered the extent of “For the Love of Sci-Fi”.  Two main halls and a small reception area, here you can buy overpriced chips, fudge and mystery boxes.  One hall was full of traders and the second hall was for the of stars of TV & Movies. So both halls designed to lift you of cash and not just any cash. A lot of cash! After walking up and down the trader’s rows and then checking out the cluster of props, you’d seen the entire event in less than forty-five minutes.  The only thing left to do, other than spend money, was to wait for a guest to sit on stage, hoping you can grab one of the few chairs laid out for the thousand or so attendees at the event.  Though there can’t have been more than one hundred chairs there and that is being generous.

There was quite literally nothing to do.  If you expected a day of absorbing everything sci-fi, perhaps quiet screening rooms with classic sci-fi movies and/or shows, sci-fi oddities to distract and perhaps even some comic book artists in attendance then (like myself) this was a day of disappointment.  If you weren’t parting with cash then you were just stuck in two warehouses, being impressed by the odd Mandalorian or Dredd Cosplayer.  Yes listening to Jon Bernthal on stage was both amusing and interesting at the same time, but the guests were few and far between and with a barrage of noise surrounding the area you couldn’t take anything else in. 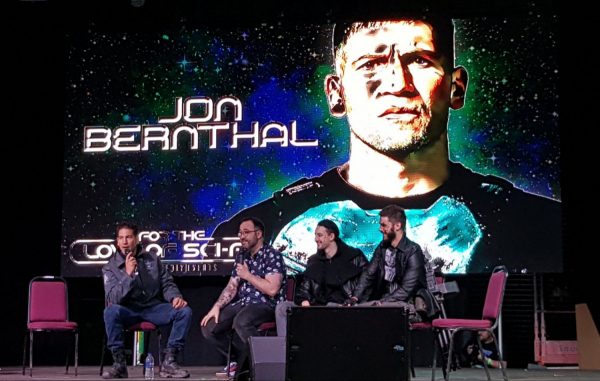 Jon Bernthal hating the sound of his own voice

All of this led me to my original opening of this piece.  Have we become so desperate for an autograph or a picture with a star that we’ll gladly spend hundreds?  I really wanted to meet Brian Blessed (he’s my personal hero), he even walked past me, but I was unwilling to part with the ridiculous amount of money to get the great man’s signature.  It’s utterly psychotic the amount people are willing to hand over just to get a photo or even a Meet and Greet.

Forgive me for even further falling backwards in time here, but I remember at Starbase ’93 (Leeds, UK) when the late James Doohan was literally walking around the hotel, stopping and talking with anyone.  Signing anything, having a photo here and there. People were good mannered with him and he the same. In the evenings he was found in the bar having a great time. Also the late Sir Terry Pratchett would walk-up to WH Smith or Waterstones and get out his pen and sign away.  I recall on one occasion he jokingly had an “argument” with my wife over what else he could sign for her, she hadn’t bought a T-shirt (only the book) and he laughed saying, “Oooo call yourself a fan?”.

Neither of these fantastic people charged or demanded an extortionate price to say “Hello!”.  Granted Sir Terry occasionally needed a bag of frozen peas for his wrist, but that was about it. 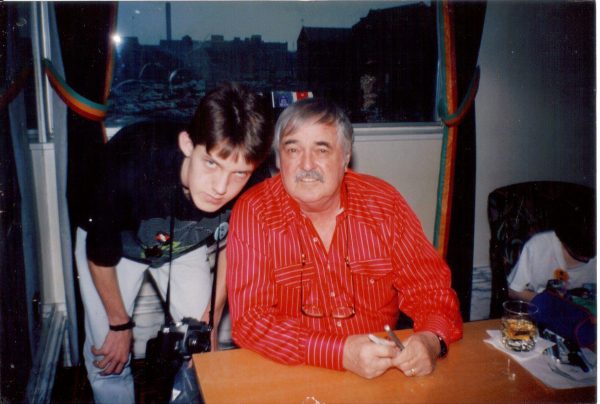 A much younger me, honestly smiling with the late James Doohan

Now however, here we are!  Paying, paying and paying to get a signature or a picture with our heroes.  I know actors need to eat and not for one minute am I saying that they should not be paid for what they do, but there needs to be a happy medium here.  Perhaps event organisers need to pay the ‘VIPs’ a high attendance fee, so they’re not out of pocket? The solution obviously needs to be ironed out, as I know from seeing other event programmes, not just For the Love of Sci-Fi, that £50-£80 can be on occasion rather cheap for a signed photo of a star.

We, the fans, are not endless sources of income, and to be personally treated like one isn’t an enjoyable way to spend a weekend.  If organised events want us to part with our hard-earned cash, then they need to earn it from our wallets and purses. Entertain us, surprise us and treat us… gain the respect of the fanbase!  Don’t just shuffle us from one cash register to the next, we don’t like that, this is our money and if you’re not careful we’ll start to spend it on other shiner things.