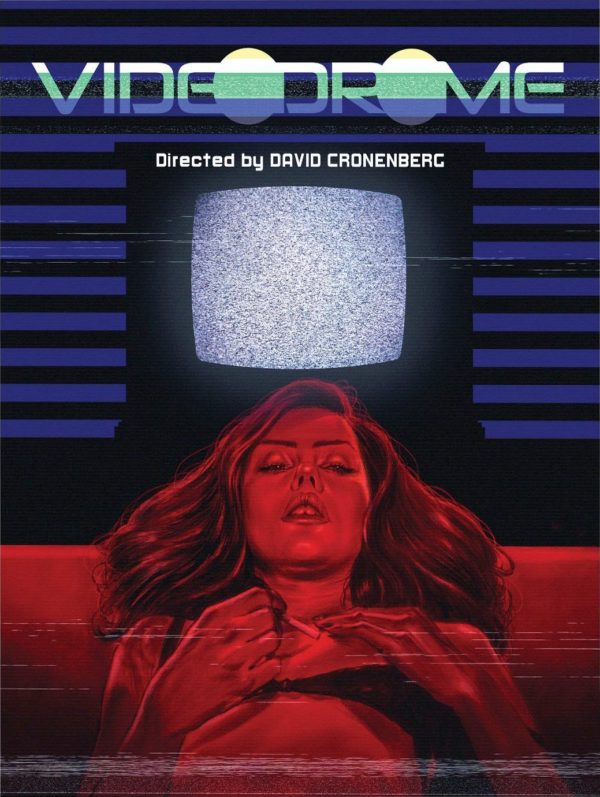 Director David Cronenberg has always been a specialist in dark Sci-Fi horror. In 1983 he made a cult film called Videodrome. A lot of film buffs around my age have seen it. It’s a big favourite among those who like something a bit out there. The film pushed the censors to the very limit. Cronenberg had a lot of battles to get his cut out there. Somewhat ironically (or fittingly) it was on VHS that the film really had a huge impact.

The film is fantastic. Odd, subversive, satirical, challenging and absolutely impeccably shot. Fans will remember the strange yet engrossing score, the fantastic body horror fx by maestro Rick Baker, and memorable lines (see the article headline). However, look beyond that and you also see a film that is a master-class in film photography. Constantly playing with light, colours and shadows, this looks gorgeous. Whilst some might argue there’s a certain involving benefit to watching this on a battered old VHS tape, I will say that getting this classic on Arrows UK Blu-Ray release (if you’re in the US, I would guess they must have a good cult Blu release too) is a great purchase. Arrow treated this with the utmost love (as they do with all their cult releases). 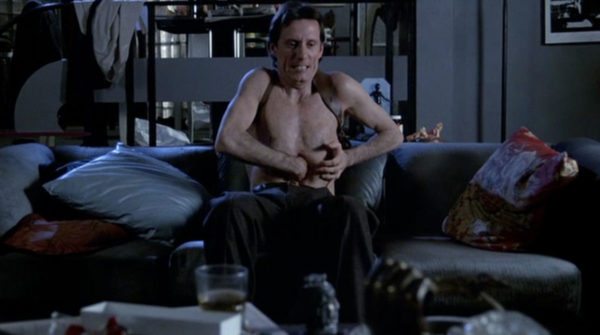 I appreciate the film is more than 35 years old now but conversely, I don’t actually want to spoil it because as my article will now state, this film not only holds up visually but it is prescient (I want newer audiences to seek this one out). This says a lot about where society was heading back then in the early days of cable TV and Video, but indeed seemed to have a looking glass into where video sharing has evolved to at the present point. Taking away the 80’s tech and look of the film’s props, this is very much a 21st century story. So the basic premise sees a low rent cable TV producer always on the lookout for cheap and extreme content to deliver to his viewers. The notion being that people are becoming increasingly desensitised to, and allured by, violence. He’s handed a tape to an intercepted transmission called ‘Videodrome’ described by Max Renn (James Woods) thus, “It’s just torture and murder. No plot, no characters. Very, very realistic. I think it’s what’s next.”

Cronenberg has always been great at exploring the darker side of humanity’s psyche. Often somewhat playfully but with an ingrained truth. What he may have seen as a potential degenerative trend back in the 80’s, may not have come entirely true (but certainly partly). However this idea about society’s tastes in ‘entertainment’ and disassociation with empathy is now worryingly close in 2018 society (worldwide). Like a lot of great Sci-Fi, it is timeless because its focus wasn’t on the tech or the fiction logic. It doesn’t look a bit silly now like a lot of 50’s-70’s sci-fi does say. It doesn’t feel dated and the key to that is in its deep psychological focus. Not merely the protagonist but the other characters within the film. There’s an objectification of women too that seems all too sadly prescient these days in the #metoo age. Granted this is a product of the 80’s, where without excusing it, times were very different. Cronenberg, like many male directors has often been lamented for how he writes female characters, although in the case of Videodrome, it’s systematic of the world he portrays and ultimately it’s a satirical deconstruction of that culture then. Indeed the fact that the protagonist spawns a vagina on his stomach which is penetrated by videotapes is a somewhat masochistic, bordering misogynist visual but seems wholly fitting in relation to the point of the film. 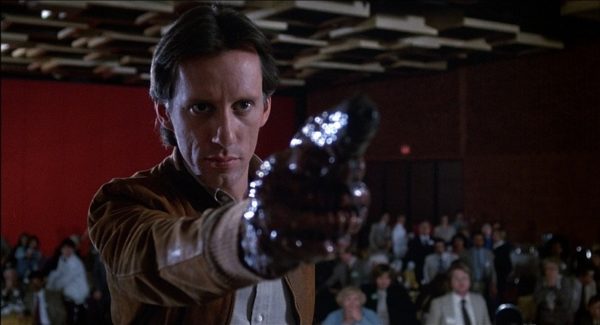 The whole notion of going viral these days and the very use of the word viral to describe that process is deliberate. These videos whether innocently moronic, sickening or just a cat falling off a chair do spread like a virus. Videodrome within Cronenberg’s world is an affliction that feeds off the viewer (and vice versa). Described as a tumor that can afflict the perception of reality. Indeed if you look at the idea that Renn wants to find extreme sex and/or violence to push out into the world, you can also look at the spread of extreme pornography in mainstream society now. It’s no longer a back street, back room, underground thing. You can watch anything on any number of streaming sites. The point is, psychologists have already established that high doses of porn lead to addiction but more-so a distortion of reality. The viewers perception of sex becomes distorted. The more exposed we become to ‘reality’ in viral video where lines of sex and violence can often cross, the more our own moral, psychological boundaries may alter.

It’s not merely porn now though. Everyone will know simply by scrolling down their Facebook time-line how often horrific videos will appear in social media. It becomes normalised. Even if they’re posted by seemingly normal folk, or forwarded on under the guise of social conscience “look what they’re doing here? This is wrong!” To all intents and purposes, people with great regularity now, are peddling snuff videos. Likewise, it’s the stuff of memes that when something horrifying happens in reality, people on the scene will pull out their phones and film the events in real-time rather than help, or call the emergency services. 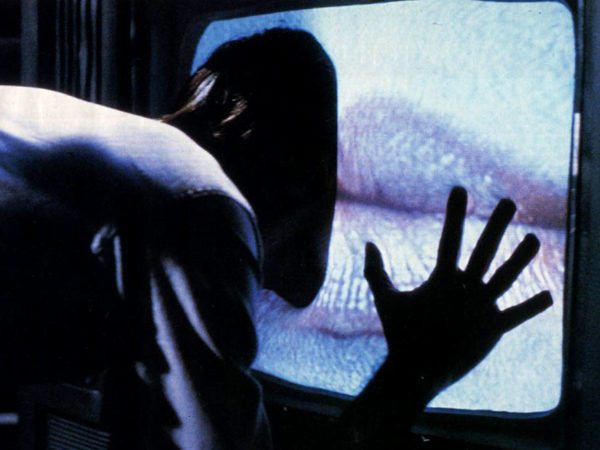 As a society, our increasing dependence on plotless, characterless ‘entertainment’ through YouTube (or more unsavoury) sources is worrying. It would take me probably 10 seconds to Google and find a beheading video if I was so inclined. The fact that ‘Two girls one cup’ ever became a thing also shows just where society is right now. Cronenberg predicted this and made fun of it, such is the ludicrous nature of it. Ultimately, as Videodrome suggests, we’re still not too evolved from our savage animal side. The fact you can make three minute videos about nothing and become a star is disturbing. Moreover the fact that this is now aspirational is even more concerning. People find themselves addicted. Spending hours scouring youtube, watching the most inane videos. I’ve done it myself too. As Renn’s reality distorts in Videodrome, he finds himself at one point, passionately kissing his TV set as his girlfriend (Debbie Harry) appears on it through a paranoid delusion.

One significant character, Brian O’Blivion, the man behind videodrome at one point states, “The battle for the mind of North America will be fought in the video arena: the Videodrome. The television screen is the retina of the mind’s eye. Therefore, the television screen is part of the physical structure of the brain. Therefore, whatever appears on the television screen emerges as raw experience for those who watch it. Therefore, television is reality, and reality is less than television.” Whilst of course our own viewing habits may have developed since, the sentiment remains true. It’s the idea that our entertainment becomes more about the physical experience rather than emotional or intellectual engagement. We become tied to this desire of instant gratification, even if the effect we crave is repulsion. Even outside the videodrome in the film, the TV we see peddled by Renn’s company and cronies range from crude sexually explicit shows to toilet paper psychology. The sort of things that offer no lasting connection, merely passing through with placation or in the extreme end, with a sickening sucker punch. 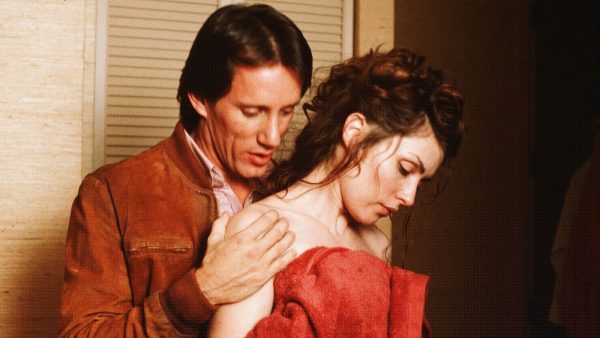 In the end, with a whole host of memorable images and moments, Videodrome is essential genre viewing, but beneath the odd nature is a thought-provoking and important piece of social relevant cinema. Let us know your thoughts on the film below.