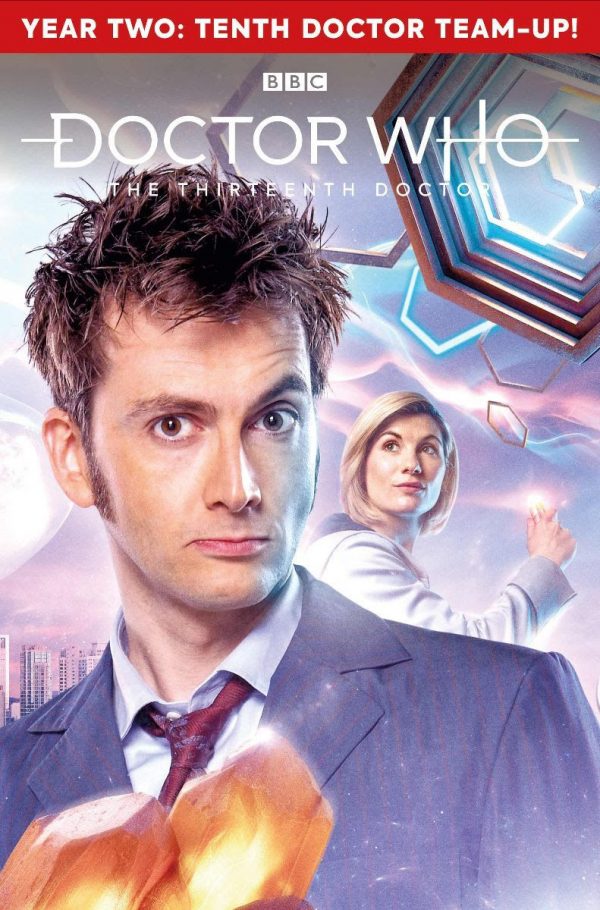 Titan Comics and the team of Jody Hauser and Roberta Ingranata yet again turn up the suspense in the second issue of the latest adventure of the Thirteenth Doctor. The previous issue was amazing and it’s great to see that the second issue does not disappoint either.

Starting from where the previous issue ended – Thirteen, Graham, Yaz and Ryan are taking stock of the events that had led them up to this point. Whilst Thirteen debates whether to leave the current events to play out, Martha stumbles upon the aftermath of the Angel’s attack and Ten is still running around London chasing readings on his make-shift detector.

Naturally in any Doctor Who team-up there comes a point when the “old” meets the “new”. It was great to see Thirteen interact with Martha as they catch up over ‘Tea and Custard Creams’.  Ryan, Yaz and Graham also finally meet Ten and there is a good bit of comedy where Yaz claims to be a ‘time detective’ – much to Ten’s surprise.

There is also the possible introduction of a side story as after the Angels’ attack on the store where Martha works, someone or ‘something’ then ransacks the shop. Obviously this does not fit the Weeping Angels’ raison d’être so its unknown of this will develop or is used as a red herring as such.

The interaction between the cast is what makes this story believable. Jody Hausers writing and Roberta Ingranata’s art really captures the spirit of the characters on the page. Reading the dialogue, you can imagine the characters saying them on screen. Even the small mannerisms and sayings of Ten are capture superbly. I would love to see Chris Chibnall give Jodie Hauser some input on the small screen as this tale is worthy of an adaptation into an episode (or two).

With the issue ending on a typical ‘Who’ cliffhanger this has me very interested in how this adventure continues.