To celebrate the Blu-ray and DVD release of Royal Rumble 2020 (available to buy from 16th March 2020) – we are giving away a Blu-ray copy to one lucky winner. 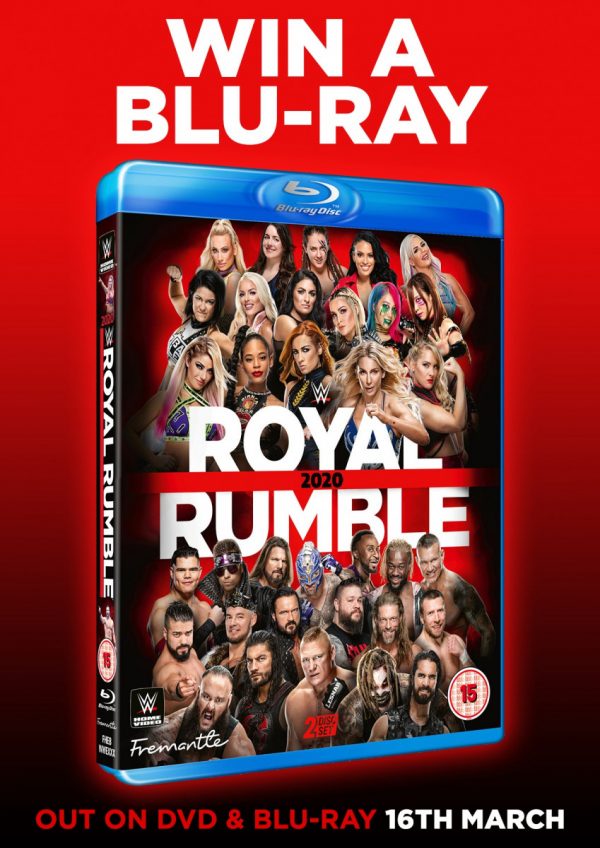 It’s the first WWE pay-per-view spectacular of the year, including WWE’s most prestigious match and the first stop on the Road to WrestleMania – the Royal Rumble! This year’s event features both men’s and women’s 30-person Royal Rumble matches, with a championship opportunity at WrestleMania on the line! Plus, Daniel Bryan challenges The Fiend for the Universal Championship, Becky Lynch attempts to finally defeat Asuka, and Roman Reigns and King Corbin go to war… and much more!

The Royal Rumble is the most exciting night in the WWE calendar! Not only are the Royal Rumble matches themselves action-packed and full of surprises, but they determine the main event matches at WrestleMania!

And this year’s the men’s Royal Rumble match has a twist – WWE Champion Brock Lesnar enters the match at No. 1 and vows to take on 29 Superstars single-handedly. The result is one of the most dramatic Rumble matches of all time as Brock dismantles the competition! Who can possibly eliminate “The Beast”? Plus, there’s a Rated-R surprise when Edge returns to action after a nine-year hiatus!

There’s also big drama in the women’s Royal Rumble, with incredible performances from Bianca Belair, Shayna Baszler, and Charlotte Flair! Meanwhile, “The Man” Becky Lynch enters a gruelling performance against Asuka – the only woman “The Man” has been unable to defeat so far!

You won’t believe your eyes as Daniel Bryan challenges The Fiend in a hard-hitting Strap Match – the scars left on Bryan’s body won’t be forgotten for a long time to come! And witness Roman Reigns and King Corbin tear the house down in a chaotic stadium-wide brawl!

The competition closes at midnight on Sunday, March 8th. UK readers only please. To enter, use one of the following methods…