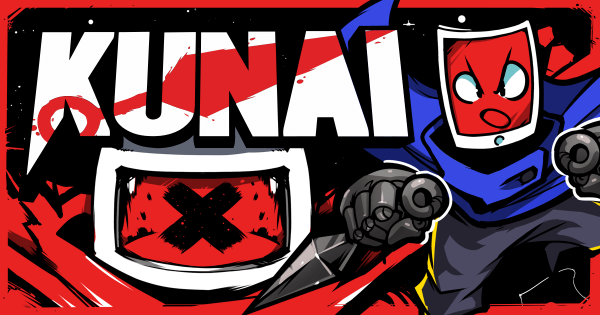 Kunai’s story is a simple one. humanity stands on the brink of collapse due to their machine creations becoming self aware and deciding that Humanity is the main threat to its existence (cue The Terminator theme). The survivors of this apocalypse have begun to fight back and a few of the sentient machines have joined their efforts. One such machine called “Tabby”, an emote-wearing-ninja-tablet, is all that stands in the way of the machines’ total victory.

Yes, Kunai is basically the end product if The Terminator, Metroid, Castlevania and a Smart Phone were all thrown into a blender. The protagonist of this world is Tabby, a tablet computer that knows ninjitsu and its quest is to stop the A.I. uprising and save what’s left of humanity. Kunai’s world is made up of different regions that feature many CRT-headed enemies to hack and slash at, as well as many different pathways to explore, which is expanded with your tool set which gives the means to open up new avenues as you proceed through the story. Kunai features platforming/exploration elements cast in the same vein as Castlevania and Metroid. Both traversal and combat are fluid and utilising both allows for a fast moving combat style. 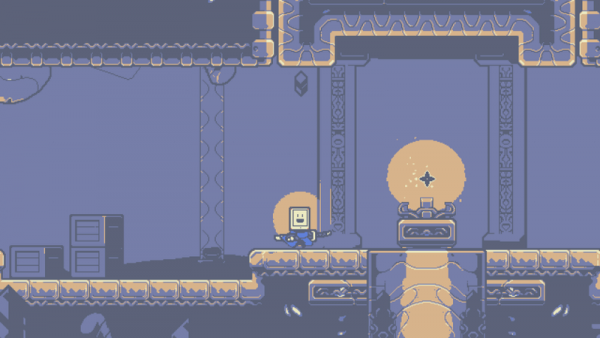 Armed with only a sword, our first task is to meet up with the Resistance. The first area acts as a tutorial as we get to explore Tabby’s abilities and fight the canon fodder enemies with relative ease. The sword does a decent amount of damage per swing and we get a pretty decent jump height as well. It’s not before too long that we are introduced to the grapple mechanic which allows up to hang from walls and to quickly climb up and down. These kunai, when coupled with the combat, allow you to pull off fluid moves that really make you feel like a badass. The screen is rarely filled with enemies so you have plenty of room to practice combo moves whilst traversing the landscape. With the kunai ability comes options to now go back to previous explored places to further explore. The world is full of theses blocked pathways that temp you to back track once you gain the means to access them; naturally this is encouraged by the possibility of loot in the form of hats, health upgrades or another ability for our robot-ninja.

The environment layout changes from screen to screen and each offers different ways to use your tools and abilities. Some screens have you climbing walls and leaping across platforms, whilst others encourage a more close quarters affair. Each environment supplements this with their own designs. The tight confined spaces of the sewers have us creating havoc with our sword, whilst the decaying city above has us utilising our kunai ability to grapple and leap from platform to platform. The world map itself is free to explore and as mentioned before, each new ability opens more of the map up. Every ability doubles as a weapon and a navigation aid. Whilst the kunai allow us to grapple, we get a pair of machine guns which double up as a ranged weapon and also give us the ability to float on the bullets if fired downwards. Each move set is easy to understand and once collected can be used straight away. Save points work similar to Metroid, where we have to access a computer to do so. Doing this not only saves the game but also recharges our heroes health. 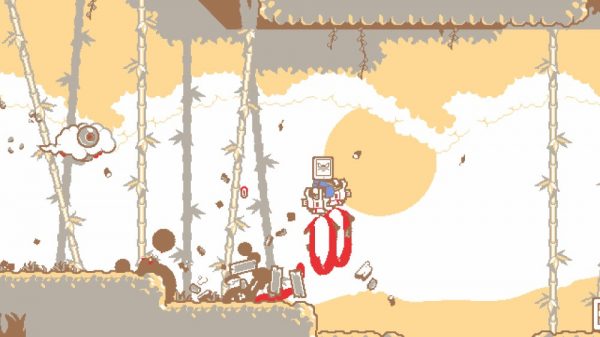 Sadly, Kunai does not feature a fast travel system so navigating previously explored areas becomes a chore. This is more prominent in the later stages where you can finish an area to then have to back track through it’s now barren halls to the start for no reward. The pain of backtracking is offset by the games gorgeous scenery shifts and great use of its limited colour palette. Each area is unique in design and has it’s own style which seamlessly transitions between each other. The use of bright reds to highlight enemies and items of interest is also a positive and really stands out from the shades of blue and grey that colour the landscape.

I had fun with Kunai; its visual style that coupled with its free-form combat and platforming made the game difficult to put down. The level design works but is slightly let down by mediocre rewards and the lack of a fast travel option. Whilst these should not put you off playing the game it can be a chore in places. When it gets the balance between its combat, platform and map traversal correct then you have a solid game that is worthy of you time. Fans of Metroid and Castlevania will appreciate Kunai’s simplicity and sense of familiarity. 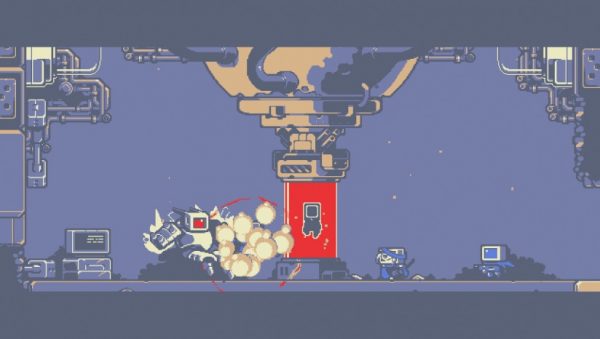 + Fluid combat that is easy to learn