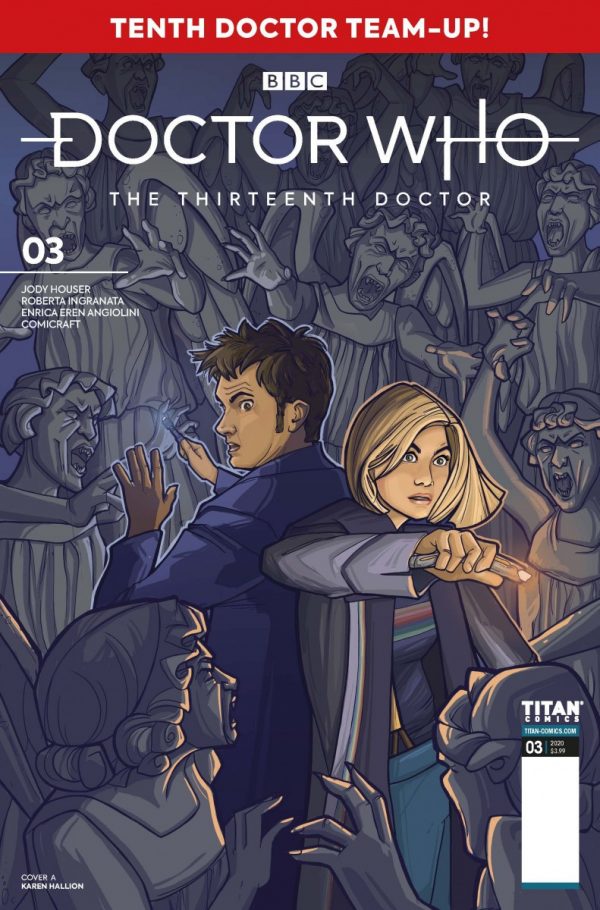 Titan Comics’ Year 2 adventures of the Thirteenth Doctor is now swinging into its third issue. With Ten and Co. caught in the gaze of the Weeping Angel, who or what ransacked the clothing store?

This issue kicks off with the cliffhanger that the previous issue left us with. Ten, Ryan, Yaz and Graham are confronted by the lone Weeping Angel and are thrown into working together to find somewhere safe, while Thirteen and Martha investigate the goings on at the the clothing store whilst armed with only a Sonic Screwdriver and a Mannequins arm.

Issue #3 has been my favourite of the series so far. Whilst the overall plot deepens ever still, we get treated to some classic Who-style comedy and finally the present and past come together in great fashion. As I mentioned in my review of the previous issue, with every Doctor team-up there comes a point when both Doctors meet. Whilst it’s also taken three issues to finally happen it’s not been a disappointment. With Martha and Thirteen fully introduced to each other it was nice to see Ten and the current team of Assistants get acquainted. We get to see Ten argue with the T.A.R.D.I.S. over its new design and his shock that Thirteen is still not ginger. With Martha and Yaz pulling the Doctors back to the present situation we get to see both Doctors’ storylines converge into one.

The introduction of a second threat throws a big curve ball which could potentially (if I’m not massively overthinking) tie into Christopher Eccleston’s first outing as Nine. Although the Doctor generally doesn’t leave loose ends so maybe not in this case. Still it had my inner Who Fan picturing all these crazy potential future spoilers.

As always I can’t praise the team of Jody Hauser and Roberta Ingranata enough. Jody’s writing coupled with Roberta’s art really brings the tale to life. Titan Comics have gotten themselves a new fan with this series and I am invested with how this tale concludes and what comes next.